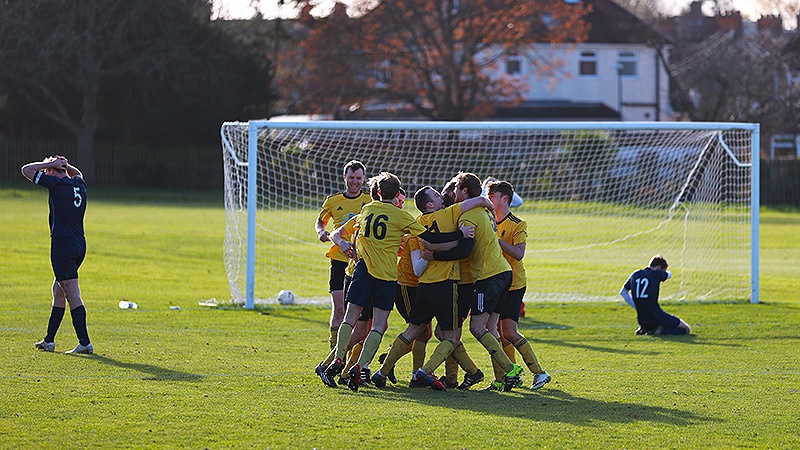 It was very much a case of lightning striking twice for the OHAFC 3rd XI on Saturday afternoon as they saw another vital win at home to the Old Wellingtonians snatched from their grasp in the final moments of the game. Substitute Khalil Baoku had given the Blues the lead with a quarter of an hour remaining courtesy of a superb strike from outside the box that flew into the top corner. With the visitors having barely registered a shot in anger in the second half, the points looked safely assured. But a late counter attack saw a cross fired in from the left and Will Monroe inadvertently diverted the ball inside the near post attempting to head clear. It was impossible for the Blues to hide their disappointment, especially given that exactly the same fate befell them in the earlier meeting between the sides – also on the Hill – when a controversial last-minute goal from the Wellingtonians was allowed to stand and again robbed the OHAFC of a deserved win.

Of all the frustrating results for skipper Ed Nicholson and his men this season, Saturday’s draw with the struggling Wellingtonians will perhaps be the hardest to swallow. In truth there was little between the sides for the majority of the game, with a strong wind blowing towards the Alcock Pavilion ensuring neat football was hard to come by. So when Baoku found the top corner with a quarter of an hour remaining, the destination of the points appeared set. Harrow keeper Tom Mitchell barely had a save to make and the Wellingtonians, nominally playing their home game, rarely managed to break into the Harrow half as the game wore on. The last-gasp equaliser was as unfortunate as it was shocking.

The first half saw plenty of endeavour but little by way of quality. The Blues tried to stamp their authority on proceedings with the central midfield duo of Lupton and Monroe attempting to slow the game down wherever possible and free wide men Brooks and Atkinson. But with the strong wind blowing towards left back Charlie Dunn, picking out forward runs was tricky, with the result that 0-0 appeared a decent outcome at the break. The Wellingtonians had also struggled to carve out any clearcut openings, several through-balls requiring Mitchell to be alert, but little else had troubled the otherwise resolute Harrow back four. There was one awkward moment when Toby Speed went over on his troublesome ankle ten minutes before the break, Baoku replacing him.

Half-time saw skipper Nicholson shuffle his pack further with Toby Colehan and Henry Collins replacing Ollie Spray and Toby Speed. But despite now having the wind in their favour, the Blues continued to struggle to break down a stubborn Wellington side, who made up for their lack of quality with hearty endeavour and decent organisation. A couple of promising breaks forwards, especially down the right hand side, threatened but ultimately led to nothing, the ball not quite falling for the Harrow forwards inside the box.

Jake Speed returned to the fray with twenty minutes remaining and, as fatigue began to take its toll on both sides, play gradually opened up and the game finally sprang to life. The hosts had again threatened down the right hand side and had built up a decent head of pressure, allowing Jake Speed to deliver the ball into the box once more. The centre half made a decent enough clearance, but the waiting Boaku wasted no time in firing a shot back in from five yards outside the box, the ball sailing into the top corner as the Wellington keeper looked on helplessly. It was the youngster’s second goal for the club in his debut season and, given the rather lopsided nature of proceedings, suggested it would prove invaluable in securing the win.

The Blues continued to press forwards, buoyed by Baoku’s superb strike, and a couple of minutes later should have doubled their advantage when Atkinson’s ball out to the right sent Jake Speed in on goal, but he could only find the side netting from a narrow angle with just the keeper to beat and men inside him waiting for a square ball.

The Wellingtonians then broke upfield and nearly found the bottom corner with a cross-shot that flew narrowly wide of Mitchell’s far post, but normal service was resumed when the hosts immediately put together a sweeping move that should and, in normal circumstances, would have put the result beyond doubt. Baoku and Speed combined, the latter crossing from the right towards the far post. Ollie Atkinson arrived on cue and directed a textbook header down into the ground. But the Wellingtonian keeper produced a magnificent save, flinging out his right boot to hack the ball clear from right on top of the goalline. It was to prove a vital intervention.

Despite Harrow spurning further chances in the final five minutes – Spray’s long-range strike was well saved and Atkinson really should have done better at the far post when drilling his shot over the bar – the game appeared up for the visitors, with the ball stuck in the Wellington half and the minutes almost up. Then, from nowhere, a long ball down the left wasn’t properly cleared, a cross was delivered and Monroe, under pressure from a Wellingtonian, could only divert the ball into the bottom corner when attempting to head clear. It was cruel luck on both Monroe himself and the Harrow side, whose performance deserved more.

It’s very possible that the two last-gasp draws suffered against the Wellingtonians may yet prove costly for the OHAFC as the shakedown of Division Four continued into 2022. The Blues have now played all but three of their fixtures, with both games against Lancing 2s to come, as well as an away game against the high-flying Ardinians. The side can now relax over the Christmas break and recharge their batteries ahead of their final few League games, no doubt hopeful that Santa leaves the odd slice of good luck in their OHAFC stockings.