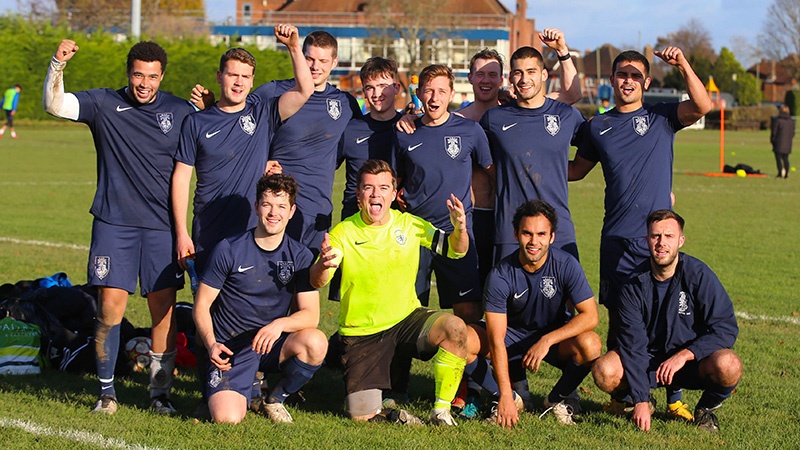 At the nineteenth time of asking, the OHAFC 1st XI finally secured victory in an Arthurian League Premier Division fixture, beating KCS Wimbledon Old Boys 2-1 at Imber Court on Saturday morning. Two George Gould goals, one either side of the break, proved sufficient, with the Blues withstanding a late barrage from their hosts to earn a first League win since beating the Old Etonians 3-1 on the Harrow School astroturf in mid-February 2020. Although the Blues remain rooted to the foot of the Premier Division table, the win understandably sparked jubilant scenes at the final whistle, with the side having suffered some morale-sapping beatings over the past couple of seasons.

With forty-eight hours to go to Saturday’s encounter, skipper Fraser McGuinness was in the almost unimaginable position of selecting players to leave out of the matchday squad with sixteen available for the trip down the A3. As It turned out, it was back to normal by kick-off time, with Murray Barr and Charlie Bick failing to turn up, and with Ed Corswarem and Doug Morrison having been released, what should have been a strong fourteen was now only twelve. This growing tendency for players to pull out on the morning of games would be bad enough for a 2nd or 3rd XI side – for it to be done by 1s players is almost beyond belief.

Despite this, the visitors started the game brightly against a Wimbledon side clearly missing a couple of their regular players. The Blues lined up with a more cautious 5-3-2 formation, with Ellis, Beecham and MacIntyre in the middle and Owen Edmunds and Jordache the wing backs. Owen Edmunds, fresh from a recent fitness drive – no doubt inspired by the arrival of Antonio Conte at Spurs and the subsequent banning of ketchup and mayo from the training ground canteen – bombed forwards down the left flank on numerous occasions, causing problems for the Wimbledon back four. In contrast, the equally eager Jamie Jordache found himself slightly isolated on the right, with the result that progress down that flank was rather more limited.

Chris Abdo spurned the visitors’ first chance of the game, but George Gould had more luck a few minutes later, earning the Blues the lead their play had deserved with a slightly fortuitous effort: another break down the left allowed Owen Edmunds to pass inside to the midfielder, he cut inside his man before firing low from twenty-five yards out. The Wimbledon keeper dived and got his hand to it, but allowed the ball to squirm through and into the net, the OHAFC into the lead for the first time in any game this season.

The hosts were stunned, no doubt going into the game feeling that merely showing up would be good enough to earn a simple victory. Having suffered the indignity of conceding first, Wimbledon responded immediately, piling on the pressure prior to the break. Several corners were forced, with one producing a shot on goal that McGuinness did well to get down to, the ball rolling past him only for Jamie Jordache to clear off the line at the foot of the post. But just before the break the red shirts got the goal their pressure deserved when a cross from the left ran all the way across the penalty area. Owen Edmunds was drawn inside and the ball rolled through to the right hand side where it was summarily thumped into the near top corner, the strike appearing to be something of a slice, but a piercingly accurate one that left McGuinnes clutching at thin air.

Half-time saw the one Harrow substitute take the field, Ibi Akhtar replacing Jamie Jordache at the back, although Will Swan was also struggling with a sore knee. But the visitors’ plans were thrown into disarray shortly after the break when Alex Ellis, who had enjoyed a fine game up to that point, aggravated an old rugby knee injury, which meant his afternoon was over. A reshuffle saw Jordache eventually take up a central position at the back, with Ibi Akhtar moving to the right wing-back role.

Despite the enforced changes, the visitors actually started the second half well, with Owen Edmunds reprising his strenuous exertions down the left and Dan Firoozan dazzling with some trademark runs through the middle, one of which carried him past four or five Wimbledon defenders before the chance was lost. Several decent crosses were played into the Wimbledon box but none found target men Abdo and Jordan on the end of them. That was until George Gould once again took matters into his own hands. Collecting the ball on the edge of the Wimbledon box, the midfielder dummied a defender before planting a low shot into the bottom corner to spark wild celebrations.

Understandably, the hosts were stunned at falling behind for the second time in the game and they threw everything at their opponents in the final twenty minutes. Numerous corners were forced and skipper McGuinness had to be at his absolute best to repel a number of shots – at one stage producing a flying save to deny what appeared a certain goal. Perhaps unsurprisingly, there were several instances of time wasting from the visitors, in a desperate bid to cling onto a first League win since February 2020. And, despite Hugh Wylie allowing some generous stoppage time as usual, cling on they did, the final whistle sparking jubilant scenes of celebration which the Wimbledon players took in good grace.

The performance, and result, whilst unexpected, give the side hope that all may not yet be lost as they bid to salvage something from the second half of the season. This begins with another tricky away trip next Saturday, down to Kent to face another strong side, the Old Tonbridgians. The side should make the trip with renewed vigour.