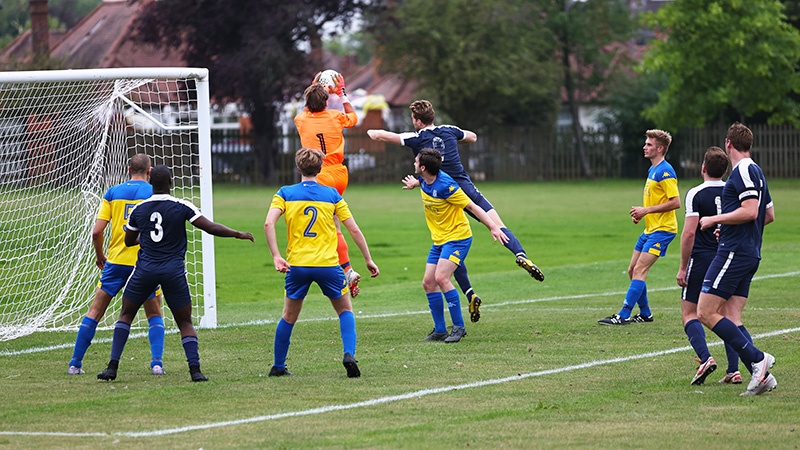 Despite another battling performance, the OHAFC 3rd XI found the Old Ardinians 1s too hot to handle on Saturday afternoon, falling to a 6-1 defeat that leaves Ed Nicholson’s men still searching for their first point of the season. In the first ever competitive meeting between the two clubs, the visitors showed why they are favourites for one of the two promotion berths with a strong display that matched their opening 6-0 win over the Old King’s Scholars.

The Ardinians needed just over ten minutes to open the scoring on the Hill, a relatively cheap goal that could have been avoided from a Harrovian perspective. Two further defensive lapses either side of the half-hour mark gifted the visitors a three-goal lead and left the Blues with a mountain to climb at the break.

The skipper made a trio of changes in a bid to get back into the game, with Khalil Baoku coming on for his debut on the left wing, Ali Buckley and Simon Nicholson replacing Jake Speed and Tarquin Strickland up front. The change in personnel appeared to have the desired effect, with the home side on top at the start of the second half. And they were rewarded for their efforts courtesy of a superb free-kick from Charlie Lupton.

At that stage, an unlikely comeback seemed possible, with both sides knowing that the next goal could prove crucial. Disappointingly, it was the Ardinians who scored it, showing why they are so fancied to do well this season with a well-worked effort to restore their three-goal advantage. A couple of defensive errors late on gave the scoreline a distinctly one-sided appearance, the hosts’ resistance having faded.

Despite the result, there were, as ever, a number of positives to take from the Harrow performance, with Olly Roberts and Charlie Lupton showing their quality in midfield, Ali Buckley nearly scoring with a superb 40-yard effort that had to be acrobatically saved by the Ardinians keeper and a solid showing from debutant Harry Maxwell down the left.

Next week the 3s host the Old Wellingtonians which, on paper at least, should provide the side with their best opportunity to collect their first points of the season so far.