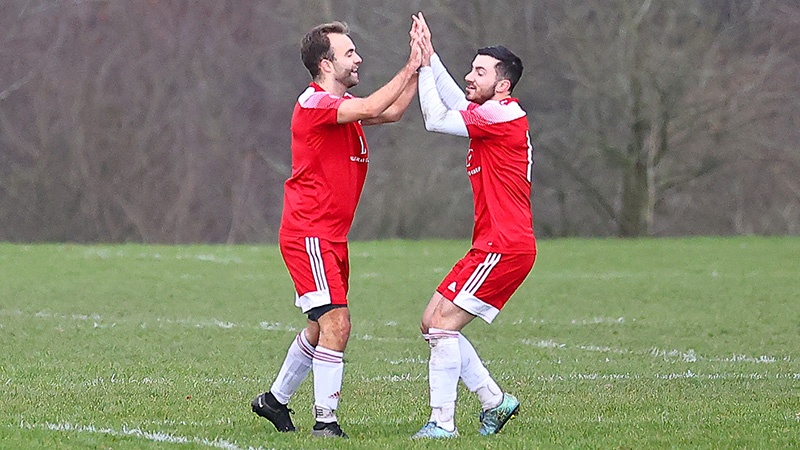 Disappointingly, the OHAFC 2nd XI followed up last weekend’s superb win over the Old Malvernians with a timid 4-1 loss away to the Old Sennockians on Saturday, allowing their opponents to close within a point near the foot of the Division Two table. On a tricky, bumpy pitch, the Blues never really got going, conceding twice in quick succession midway through the first half. Despite a strong start to the second half, some sloppy defending gifted the hosts a third and despite Miles Kellock pulling a goal back with twenty minutes remaining, Sennockians scored a fourth almost immediately and ran out comfortable winners.

This performance was wholly unexpected given the consistently solid displays the 2s have produced this season. Although the side have won only twice in the League, every fixture has been competitive bar the 5-0 loss to the Radleians a fortnight ago when Felix Orchard’s early red card distorted the task beyond repair. Felix’s brother Joe donned the gloves for the first time this season for the Sennockians encounter, but the back four remained the same from the win over Malvern, Azhar Khan and Giles Newton replacing the injured Max Curry and absent Pedro Azagra.

The pitch at Sevenoaks School left much to be desired, with the lengthy grass resembling more of a rugby field. Thankfully, however, there was little wind, the leaden skies and cold winter chill presenting a fairly bleak landscape at kick-off.

The Sennockians had won only one fixture prior to Saturday and the visitors were determined to impose themselves on the game early, but a quiet start to proceedings gradually led to the home side enjoying more of the ball and beginning to threaten the Harrow goal. In a bid to combat this, OHAFC skipper Geoff Taunton-Collins made an early tactical change, bringing Lederman in from the right wing to the middle of the pitch. The Blues briefly flickered into life, with Kellock down the left and Newton down the right both venturing forwards and Khan and Portal in the middle trying to assert themselves. But up front, Tristan David, in his unfavoured role, struggled to get the better of a sizeable Sennocks rearguard and the hosts’ keeper was rarely threatened.

Nevertheless, despite clearly looking second best, the Blues reached the midpoint of the half still on level terms and in the game. But that changed in the space of five minutes when Sennockians scored twice. The first was a simple header from an unmarked centre-half who wasn’t picked up as a free-kick was swung in from the right. The second was controversial. A cross was delivered from the Sennockians left wing and two forwards converged on Joe Orchard. Whether or not the first player got a touch on the way past seemed irrelevant as both players appeared several yards offside. Every defender stopped as the ball was fired into the goal, but the referee wheeled away and when quizzed as to the validity of the goal, seemed genuinely confused what the issue was. The Blues now found themselves two goals down with a mountain to climb. And their task was made harder when a struggling Lederman was forced off with just under ten minutes remaining to the break, his groin strain apparently still not right. Taunton-Collins was the replacement, with Giles Newton moving inside and the skipper adopting his usual right wing role.

The half-time team talk focussed on getting back to basics, with the side asked to play the simple balls and to up the accuracy – although the surface was a poor one, the lack of precision in some of the Harrow passing could not be excused.

For the first fifteen minutes of the half, the team seemed to have heeded their skipper’s words and enjoyed their best spell of the game, looking the sharpest they had done all morning. Suddenly it was the blue shirts that were quickest to the ball and play became focussed in the Sennockians half. Again, the visitors struggled to create chances, but the worried shouts of those in red hinted at the pressure they were under.

But with the result still in some doubt, the visitors then committed footballing suicide with the concession of a needless third. Azhar Khan played a careless pass back towards his own box, leaving Giacomo Grasso to deal with a one on one. Although the defender got a toe to the ball, it ran free past the sprawling Orchard allowing simple tap-in for the Sennockians player, who couldn’t believe his luck.

To Harrow’s credit they stuck at their task, albeit with the prospect of earning a positive result now a remote possibility. But with just under twenty minutes remaining an excellent move down the right saw Taunton-Collins and Newton exchange passes and the latter deliver a cross to the far post for Miles Kellock to head in his fifth goal of the season. The enjoyment at finding a breakthrough was short-lived: almost immediately a long throw from the Sennockians keeper freed the pacey left winger and with both Will Monroe and Taunton-Collins struggling with tight hamstrings, the race was one-sided, the forward carrying the ball into the box and firing past Joe Orchard at his near post.

The home side enjoyed the closing quarter of an hour, egged on by a number of supporters on the side. It was a fairly comprehensive victory and fully deserved. The Blues have one fixture remaining prior to the Christmas break, with the visit of the Old Chigwellians 2s to the Hill now taking on added importance.