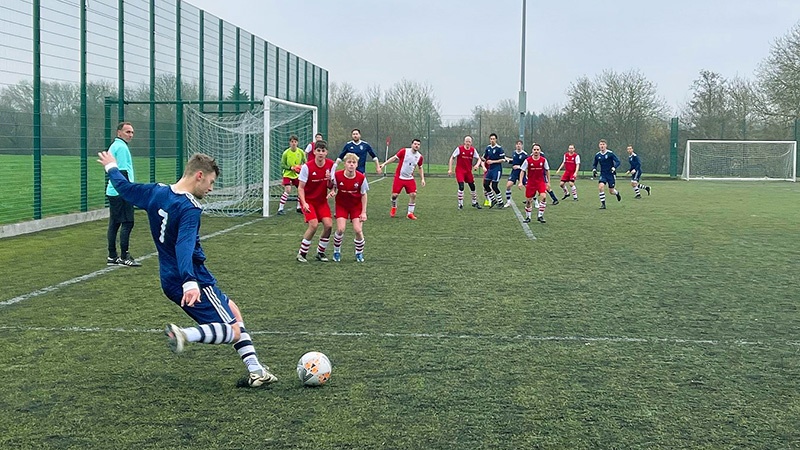 The OHAFC 2nd XI were made to pay for a sluggish start on their return to competitive action following a lengthy winter break as they fell to a frustrating 5-4 defeat away to the Old Radleians on the astroturf in Whitton. Despite a stirring late fightback that saw the visitors score three times inside the closing quarter of an hour, a disastrous opening twenty minutes cost the Blues the chance of earning a point, the Radleians finding the net three times themselves with a series of superb finishes. Suddenly, the Division Two table has tightened up noticeably, with just three points now separating the OHAFC in sixth from the bottom side, the Old Carthusians 2s.

With a strong squad of thirteen and a first fixture in just over a month, there was great enthusiasm from the travelling party, with one member of the team especially keen to get going: skipper Geoff Taunton-Collins was finally able to name himself in a lineup sixteen months after suffering ACL damage whilst playing for the 2s away at Merchant Taylors. The skipper named himself on the bench alongside Jack Dolbey – proof of the strength of squad available.

Despite this, the Blues endured a nightmare start to the game, with the Radleians, who had played both last weekend and the Saturday prior to Christmas, far sharper on and off the ball. Even so, the quality of the hosts’ goals was exceptional, Harrow keeper Kyri Pittalis given no chance with any of the three shots conceded inside a dispiriting fifteen minutes. The first effort, after barely five minutes, was perhaps the best goal of the game: a diagonal ball from midway inside the Harrow half was arrowed towards the far post and acrobatically turned in on the volley, the Radleian player stretching with his left leg to somehow divert the ball back across goal and over Pittalis’ head. The same player produced another unerring finish soon afterwards, drilling a shot just inside the far post from the tightest of angles, and when a third unstoppable effort flew in soon afterwards the visitors were shell-shocked. This was not how the second half of the season was supposed to start.

It took the visitors half an hour before their football finally began to improve, Kellock producing moments of quality down the right and Alhadeff looking threat down the left, whenever the ball was played out to him. Far too often possession was needlessly squandered or forced down blind alleys. When play was switched, the Blues resembled a decent side and a swift counter-attack saw a glimmer of hope emerge and the first Harrow goal of 2022. Alexi Pittalis and Max Curry were involved down the right and they played in Kellock whose effort on goal was parried by the Radley keeper. Alhadeff collected on the left and delivered a superb cross to the far post that was begging to be headed in – Kellock duly obliged and Harrovian spirits lifted.

But just as the momentum appeared to be swinging in their favour, the visitors were dealt what, at the time, seemed a fatal blow, conceding a fourth goal, from nowhere, shortly before the break. Radley’s threat going forwards had subsided following the opening flourishes, but the scorer of two of their three first goals now completed his hat-trick in fine style, cutting inside off the left wing before smashing a shot inside the near post. Although the ball was some way from the corner of the goal, Pittalis was unsighted until too late, the ball speeding past barely a couple of yards to his right.

At half-time, the skipper introduced himself to the fray in place of Max Curry up front, with Jack Dolbey having already replaced John Portal in midfield. Alexi Pittalis pushed further forwards in a bid to cause more problems for the Radley back four. In truth, however, this led to the visitors playing far too long most of the time, with the vast majority of the balls forward gobbled up by the huge Radleian centre-back.

The good news was that the Radleians appeared comfortable to sit on their lead, play now concentrated inside their own half, well away from Kyri Pittalis’ goal. This led to the majority of the second half providing little by way of goalmouth action for those watching on, the visitors relying on some dangerous corners delivered from Kellock, and a few long throws. A second goal should have arrived courtesy of the former, but somehow Ward and Alexi Pittalis got in each other’s way and between them they headed over from six yards out with the goal at their mercy. With time ticking down to the final quarter of an hour, there was little sign of the extraordinary havoc about to unfold.

It started, predictably enough, with a Harrow corner, the Radleians struggling to clear and John Portal smashing in from close range after Alexi Pittalis had flicked the ball on. Two goals down and just over ten minutes to go, the Blues sensed a fading opposition and a chance to exert some serious pressure. A third goal so nearly arrived when Ward’s effort following another corner was so nearly fumbled in by the keeper, the Radleian reacting just in time to turn and grab hold of the ball as it was about to cross the line.

But with the hosts now visibly rocking under this unexpected onslaught, the Blues shot themselves in the foot and conceded what would ultimately prove to be the defining goal of the game. A long ball forwards was comfortably collected by Kyri Pittalis and he attempted to spring the visitors forwards with a long throw to Lederman on the right wing. His intended pass was well read by the Radley winger however, who seized control of the ball, dribbled to the edge of the area before smashing another unstoppable effort into the far top corner – his fourth impeccable finish of the game.

The Blues could have been forgiven for throwing in the towel at this stage, or at the very least believing that lady luck was most definitely not on their side. But to the side’s credit they continued to drive forwards with considerable effort, making life for the Radleians extremely uncomfortable. And when two further Harrow goals were scored in the space of three minutes, a remarkable comeback still seemed on. The third goal came from the spot, Lederman converting after a rather theatrical dive from Alexi Pittalis under a challenge from the Radley keeper. Lederman then delivered a corner from the left for John Portal to powerfully head home his second goal of the game.

Five minutes remained and the visitors threw everyone forwards in a desperate attempt to salvage a point but the Radleians held on, some understandable time wasting helping them to see out the final tense few minutes.

It was a valiant effort from the OHAFC, whose spirit remained unbowed throughout despite twice trailing by three goals. The Blues can also take a crumb of comfort in becoming the first side to score four goals against their opponents since Division One side the Old Reptonians did so in a Dunn Cup tie all the way back in October. The 2s just need to hope their remaining opponents this season cannot produce a player with the finishing prowess to match the Radlieans’ four-goal star.