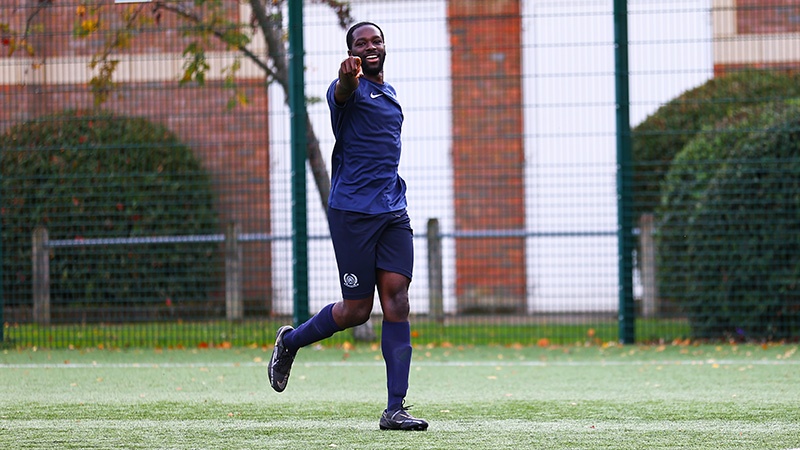 An 87th minute winner from Tobi Adebayo earned the OHAFC 3s a second successive win in Division Four in dramatic circumstances, the young forward racing through to poke the ball wide of the onrushing keeper to spark joyous scenes on the touchline. It was the climactic end to a frantic half of football that saw the hosts twice take the lead, only for the visitors to level on each occasion. Adebayo’s timely strike, his second of the game, lifts the Blues into third in the table, albeit having played more games than their rivals.

With the 3s suffering from the chaos caused by the 1s lack of availability for the Dunn Cup tie at Shirburnians, they arrived at Hampton Sports Centre just south of Twickenham with a bare eleven that included Olly Roberts – who had just completed ninety minutes for the 2s and only made it to the ground a minute before kick-off having ridden an hour around the North Circular Road on the back of Lederman’s Vespa. Regular skipper and goalkeeper Tom Mitchell was required by the 1s, so Henry Collins once more donned the gloves, with former captain Ed Nicholson playing himself as a target man up front, Adebayo and Jake Speed providing the width in attack. Jose Linares made his first appearance of the season at right-back with Felix Tritton joining Simon Nicholson at the heart of the back four.

Just as in the 2s game that kicked off a few hours beforehand, there was an extraordinary start to this match too involving the Harrow defence. With a minute, the normally reliable Henry Collins had nonchalantly picked up a deliberate backpass and when referee Daniel Lodjoh blew for an indirect free-kick just outside the box, the Harrow man seemed oblivious to the reason why. Once teammates and opposition alike reminded him of the law, his embarrassment was palpable. Fortunately, no harm was done, the resulting shot was tipped over the bar and the subsequent corner cleared.

Although the early stages were characteristically scrappy, the Blues settled well into their task and began finding holes in a shaky Wellington rearguard. Jake Speed enjoyed plenty of space down the left and showed all his pace and drive. He created one early chance for Ed Stewart, but his shot from just outside the box flew wide of the target. Adebayo then found himself brought into the game more on the opposite wing, but he too spurned an early chance to open the scoring, firing straight at the keeper. It was, in fact, former skipper Ed Nicholson who probably had the best chance of all to break the deadlock, a perfectly weighted through ball from Ed Stewart sending him clear but the finish was wild and posed more threat to passing pigeons than the Wellington goal.

Despite this early promise, the visitors enjoyed a huge stroke of luck midway through the half when a Wellington striker latched onto a ball over the top and smashed a shot on goal. Collins had rushed off his line and did well to block, but the ball continued rolling towards the goal before it was hacked clear. The hosts appealed vociferously for a goal, referee Lodjoh waved away the shouts – the OHAFC players, tellingly, stayed rather quiet.

This incident kick-started a decent period for the home side, who began to control possession nicely. Despite this, there was a lack of an end product, with the Harrow back four of Linares, Simon Nicholson, Tritton and Dunn coping well enough with any threat posed, both in open play and from several corners won. The visitors also saw several corners fail to count despite some excellent delivery from Charlie Dunn with his trusty left foot.

The half looked destined to end goalless until, with just a couple of minutes remaining, Roberts fed Adebayo down the inside right channel, leaving him with just the keeper to beat. The youngster flicked the ball past the onrushing custodian but could only watch as it rolled agonisingly wide of the far post.

With no substitutions available to them, the Blues had to plough on with the same eleven, Roberts somehow appearing unaffected by his earlier ninety minutes of action. And the visitors began the half well, playing with more confidence and composure on the ball – something requested of them by vice-captain Charlie Lupton. A couple of long shots were hit, Speed threatened a couple of times down the left – a Harrow goal appeared imminent.

But, firmly against the run of play, it was the hosts that actually opened the scoring with a beautifully crafted goal: the ball was played down the left wing and the wide man feinted to cross before dragging the ball back and clipping it in with his right foot, a midfielder arriving late to produce a rarely-seen diving header that propelled the ball into the bottom corner.

The lead last four minutes, the visitors levelling with a header of their own as Charlie Lupton delivered a sweet cross from the left for Adebayo to rise at the far post and send the looping back over the keeper’s head and into the far corner.

A minute later, the home side had regained the lead, the game now resembling a basketball match as play switched frantically from one end to the other. This third goal was another header and the simplest of the lot: a corner was curled in and the tall centre-half enjoyed the freedom of the park to thump in at the far post. It was so nearly 3-1 as minutes later a long shot crashed into the foot of Collins’ post, the ball fortunately rebounding wide.

Harrow were now rocking. Dunn’s free-kick into the Wellington box was cleared and from the ensuing breakaway a cross to the far post ended with Collins producing an excellent block to keep the deficit to just one.

This would prove crucial as, from almost nowhere, the visitors found themselves level just after the hour mark courtesy of a superb effort from Ed Stewart. A cross into the box from the left wing was flicked on by Ed Nicholson and Stewart produced an acrobatic overhead kick, his effort cleanly struck but taking a small deflection off a defender to send looping perfectly into the top corner.

The game was now there for the taking for either side and they both realised it, throwing men forwards in search of the winner. The result was that play became stretched and spaces began to open up. Adebayo had the first chance to prove the hero, but his effort was well blocked by the rather amusing Wellingtonian keeper at the near post. A dangerous break from the home side right down the middle of the pitch was then abruptly ended by Felix Tritton hauling his man back and drawing the only yellow card of the encounter. And the visitors then nearly snatched victory in cruel circumstances, an overhit cross from their right flew over the head of Collins but had been superbly read by Jose Linares and he recovered just in time to hack the ball clear off the line.

With five minutes remaining, the hosts won a free-kick thirty yards out in a central area. The initial shot was a poor one, crashing straight into the wall, but the rebound fell kindly to a Wellington player and his effort was much more threatening, requiring a superb reaction save from Collins, diving low to his left.

The importance of that moment became clear a couple of minutes later when the Blues snatched all three points with a late breakaway goal. Roberts collected the ball in midfield, carried forwards before slipping it between two defenders for Adebayo to run onto. This time his little flick past the keeper was on target and possessed just enough power to roll agonisingly into the net despite the best efforts of a Wellingtonian defender to get back.

Still there was time for drama and Henry Collins embellished his claims for a Man of the Match award with another superb stop, throwing himself to his left to tip a header just past the post. It would prove the decisive final act, with the visitors able to see out the remaining couple of minutes without further alarm.

An excellent win for the team that propels them into third in the table and gives them some breathing space as their relentless fixture list continues: the 3s have played every Saturday since September 17th and are not scheduled to rest until mid-November. They will, all things being equal, play twelve of their sixteen League fixtures prior to Christmas, some truly bizarre scheduling from the Arthurian League.