3s ease past depleted Lancing into round two 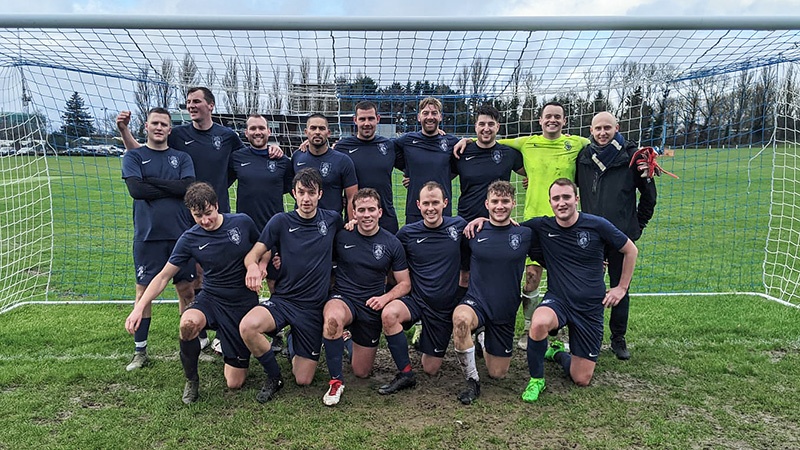 The OHAFC 3rd XI produced a solid performance on their return to action following the Christmas break with a comfortable 3-0 win away to struggling Lancing 2s in the first round of the Junior League Cup at Kingston University's Sports Ground in Tolworth. The two sides went in level at the break, despite the hosts somehow starting the game with just nine players. But the Blues made full use of their fourteen-man squad and, as the game wore on, eased away from their tiring opponents, earning a 3-0 win courtesy of goals from Adam Graham, Olly Roberts and Freddie Everett. The 3s are rewarded with home tie against fellow Division Four side Old Ardinians 2s in the next round.

Having played more League games prior to Christmas than any other side in the Arthurian League, the OHAFC 3s deserved their month-long winter break more than anyone. And they returned here with renewed vigour, a full squad of fourteen named for the trip down the A3, with even Charlie Lupton, part of the captaincy triumvirate, making the trip in a purely managerial capacity.

Driving rain greeted the players on arrival at the ground, but even more disappointing was the news coming from the Lancing dressing room of the late arrival of several players. Having asked for an earlier 12.15pm kick-off, the hosts were now begging for this to be put back to 12.45. Harrow duly obliged, but even by this time the home side were two players shy of a starting XI and remained so for the first half-hour of the tie.

But the visitors failed to take advantage of their numerical superiority, despite switching to a 3-5-2 formation in a bold gamble to push more players further up the pitch – have they not been following the travails of Antonio Conte’s Tottenham this season? Sure enough, in keeping with the garbage served up by the mighty Spurs this season, the Blues offered little to nothing in the first half. Too many balls were fired long and rather aimlessly towards the front two of Adam Graham and Freddie Everett, too many flicks failed to find their intended target.

With half an hour played, the remaining Lancing players arrived but the balance of play remained largely the same. The visitors did begin to string a few passes together, Awdry and the two Dunn brothers, Charlie and Sam, especially prominent. A couple of half-chances were created but neither Everett nor Graham could find the finish and so the two sides went into the break deadlocked at 0-0, Mitchell a virtual spectator in the Harrow goal.

Unsurprisingly, changes were made at the break, with Ed Nicholson, Toby Colehan and Ollie Spray all coming on and the team reverting to their usual 4-3-3 formation, the experiment with the back five clearly not working as intended (Conte are you listening?). Adam Graham became the focal point of the attack and this seemed to suit the side better as the play became more fluent. With the back four now dominant and Lancing, who sit just two places off the foot of the bottom of the Arthurian League, offering next to nothing in attack, the tie rested on the visitors being able to find a breakthrough.

It took until the 63rd minute for the opening to arrive, but when it did so, there was a familiar name on the scoresheet, Adam Graham notching his tenth of the season, bundling in from close range following excellent work down the right from Olly Roberts.

Roberts proved a constant thorn in Lancing’s side, his status as one of the fittest players in the club serving him well on the heavy pitch as he motored up and down with dizzying intensity. And he earned full reward for his efforts when he doubled the visitors’ lead with a quarter of an hour remaining, taking advantage of some quick thinking by Awdry to latch onto his rapid throw-in, run in on goal and knock the ball through the keeper’s legs. Freddie Everett sealed the win with a third six minutes from time, finishing off the post following a goalmouth scramble at a corner. It was no more than the OHAFC deserved.

The 3s now have a week off before taking on Old King’s Scholars in their first League fixture of 2023 down in Hampton. The second round JLC tie against the Ardinians is scheduled for February 4th, although is subject to confirmation.