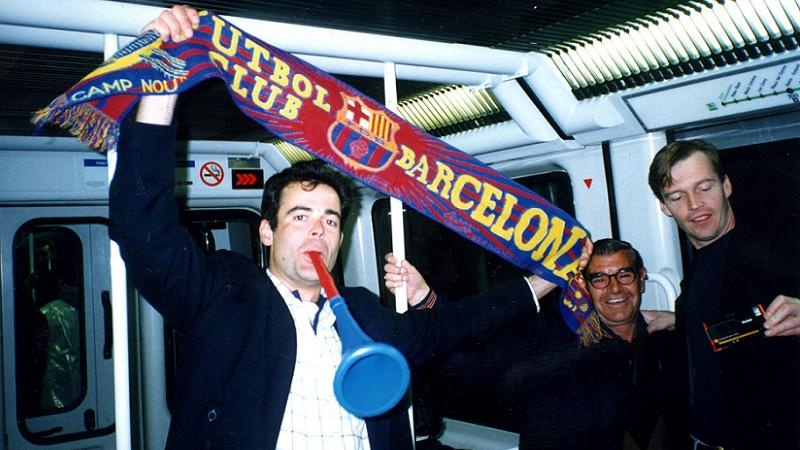 In 1995 Jimmy Verdin took the OHAFC tourists off to Barcelona for the second Easter Tour on Spanish soil, following on from the Majorca trip in 1998.

It was an excellent choice of venue, with the city still basking in the facelift it had received for the Olympics three years previously. A strong squad of twelve made the trip, with school captain Paul Molloy enjoying his first OHAFC experience - although he was unfortunate in that Andy Butler, one of the most boring members of the travelling party, took it upon himself to look after the doe-eyed Molloy.

Accomodation for Easter weekend was a small but smart three-star hotel located close to the Columbus statue in the port at the gateway to Las Ramblas, the long, stately avenue running through the heart of the city.

On the Friday, the first game saw the side lose narrowly to 2-1 to FC Saltenc but sorrows were drowned with a visit to the Olympic village in the north of the city. There, amongst the bars & clubs, Bobby Tindall got to work, annoying a hen do with his dreadful dancing and even worse chat, but somehow procuring an email address from a young girl in another bar.

Lederman tried out some of his Spanish on two young Catalan girls, but ended up mistakenly informing them that he was playing against Barcelona in the Nou Camp the following evening, not watching them - unsurprisingly, the girls didn't believe him and wandered off unimpressed.

Molloy and Butler had better luck, entertaining two young ladies with an intensive debate on the standard of officiating in the Arthurian League, but this only led to Molloy getting a bumpy ride in a tiny Seat Panda and little else.

The next day the team had a bumpy coach ride of their own with a lengthy journey up one of the Pyrenean hills to play FC Osor on a hard, dusty surface. With Keenan positioning himself up front, it was nothing short of a minor miracle that a 6-2 victory was gained. The reward was a cold, outdoor shower.

Back in town, early beers and tapas were the precursor to the much-anticipated trip to watch Barcelona play Real Sociedad in the Primera Liga. A half-hour metro ride, with Verdin blowing loudly on his newely-procured plastic trumpet the whole way through, led us to the magnificent Camp Nou stadium where we had seats halfway up the top tier - it was unanimously agreed on taking our places that if we had the choice to play one game of football anywhere on Earth, this would probably be it...

The game itself was something of a disappointment with the home side, including such luminaries as Hristo Stoitchkov and Robert Prosinecki, stumbling to a 1-1 draw, much to the displeasure of the 90,000-odd Catalans present.

The final day, which began with the discovery of an inch-long hair growing out of the top of Tindall's right ear, saw the side take part in the Torneig de Futbol Verdiblanc, a competition organised by the Penya Betica of Andalucia, a Real Betis supporters club from southern Spain. Several matches were played on typically sandy pitches in the centre of town. Although OHAFC didn't win the tournament, they did manage to claim one piece of silverware when David Lederman collected the trophy for Best Foreign Player (pictured below).