2s ease into JLC round two with humbling of debutants 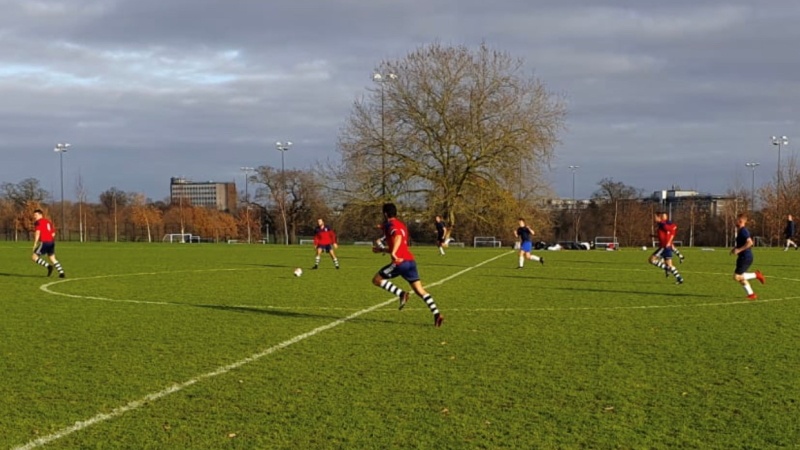 The OHAFC 2nd XI eventually eased away from the Old Rugbeians 2nd XI on their competitive debut to record a comprehensive 9-0 victory in this Junior League Cup first round tie.

Playing on the Park Lake pitch adjacent to the school athletics track due to the Philathletic Ground being rested this weekend, the home side struggled against a lively Rugbeians outfit in the opening half an hour, the visitors perhaps looking the more likely to score as keeper Charlie Walsh was required to field a number of shots from distance.

The hosts found the slightly uneven surface tricky to get to grips with, although several openings were worked down either flank, the final ball lacking in accuracy.

Fortunately, nerves were calmed courtesy of two composed finishes from midfielder Ollie Curry, who twice collected the ball on the edge of the box before biding his time and planting the ball into the bottom corner, once with his left foot, once with his right.

Gradually the Blues, who lie second in Division Two having lost a solitary League game all season, clicked through the gears and a third was scored prior to the break, Andres Hutchinson racing clear down the right, carrying the ball into the box and slotting past the keeper from close range.

Five minutes into the second half, the hosts produced a lovely move down the right that culminated in Pablo Hutchinson crossing for Tristan David to slot home at the far post. And that goal broke the back of what had been a decent effort from the visitors up to that point.

The Blues scored five more goals in the closing forty minutes, Andres Hutchinson with three of them including one memorable effort when he raced half the length of the pitch wearing just one boot to execute another close range finish. Ed Beecham prodded home from close range after Jack Orr-Ewing had seen his header from a corner well saved and finally, perhaps most memorably, full-back Will Monroe fired into the top corner following a well-worked short corner routine with Pablo Hutchinson.

The Blues must wait to find out who they will face in the last sixteen of the competition, although their path to glory has, apparently, been made somewhat easier by the surprising defeats of both the Etonians 2s and Chigwellians 2s, who both lost in penalty shootouts to sides in lower divisions.

The OHAFC now have a week off before the final match of 2019 - a Christmas cracker of a clash between the top two in Division Two, Carthusians 2s visiting the Hill on December 21st.