1s bow out of the Dunn in extra-time 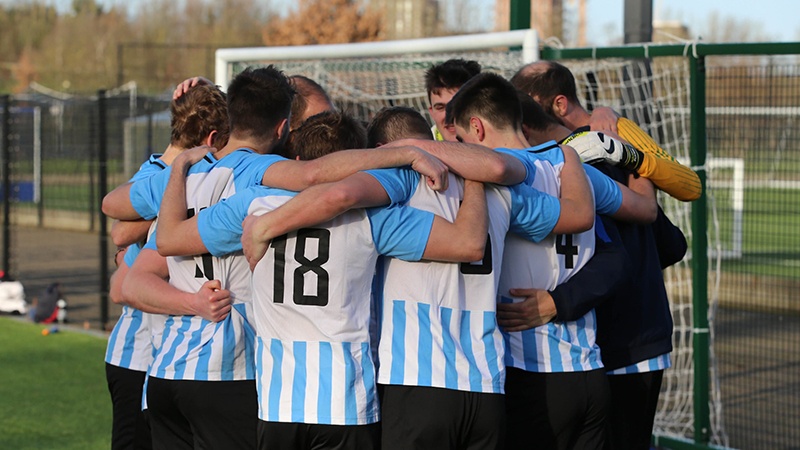 The OHAFC 1st XI exited the Arthur Dunn Cup at the second round stage in disappointing fashion on Saturday morning, falling to a 3-2 extra-time defeat at home to KCS Wimbledon Old Boys on a windy Harrow Hill.

In a game played on the school astroturf due to the Philathletic pitches being unplayable, the hosts dominated the opening exchanges and could, and should, have taken the lead with both James Breeden and Harry Bick missing clear opportunities to score. As it was, the visitors struck first, establishing a two-goal lead courtesy of a dinked finish and a free-kick that curled straight through a crowded box before nestling inside the far post. But Harrow stuck to their guns and forced extra-time courtesy of a Breeden penalty and a fluke goal from Bick, whose cross from the right wing flew over the Wimbledon keeper and into the far top corner.

Extra-time saw few chances created by either side, but it was the visitors who snatched the win with a goal straight from kick-off at the start of the second half, pumping the ball long towards the Harrow penalty area, winning the knock-down and an excellent finish saw the ball fired low inside the near post. The defeat means the OHAFC have seven League games remaining in the New Year and must concentrate on climbing up the Premier Division table.

As with several of their recent outings, it was very much a case of what might have been for the OHAFC 1st XI, although this time there was no late collapse, nor avoidable defensive lapses that cost them the tie. Wimbledon have proved themselves a tricky proposition for everyone this season, remaining undefeated in League and Cup and, following this latest win, remain on course for a serious challenge in both competitions. Having defeated the Blues 4-1 on the Hill a few weeks ago, this was never going to be an easy hurdle to overcome.

But the start the hosts made was hugely encouraging and suggested that a first place in the quarter-finals for four seasons was far from beyond them. In a howling gale on the astroturf that made playing football nigh on impossible, the Blues made all the early running, switching the ball confidently across the back four, utilising the superb close control of Firoozan and Robinson in midfield and freeing James Breeden and Harry Bick just enough to keep the Wimbledon defence on their toes.

Chances duly followed, with only some profligate finishing and excellent goalkeeping maintaining the status quo in the scoreline. After twelves minutes Robinson freed Harry Bick down the left, he cut inside and fired in at the near post only for the keeper to parry not only that effort, but follow up shots from both Bick and James Breeden.

A couple of minutes later, the same two players came within inches of securing the lead: Bick won a 50/50 challenge inside the centre circle and fed his strike partner down the inside left channel. A stepover threw his marker off balance but the fierce left-foot shot that followed cannoned off the underside of the bar and away to safety.

It was at this stage that murmurings began on the sidelines about how costly the missed chances might prove to be later in the game, but the Harrow pressure continued unabated and a goal seemed only a matter of time. Robinson should have provided the next chance, but with James Breeden in an acre of space on the right, the midfielder agonisingly over-hit his pass and the ball rolled safely out for a goal-kick. Moments later Wimbledon somehow escaped again, this time Firoozan was the architect as he carried the ball down the left before finding Breeden inside the box. The ball got slightly caught under the striker’s feet so he tried an extravagant ‘Rabona’ finish that was blocked, before firing the rebound wide with the goal at his mercy.

McGuinness was required to make his first save of the game midway through the half, Wimbledon finally reminding those present of their pre-match status as favourites with a stinging effort that required the Harrow skipper to dive to his right and palm the ball away.

But back up the other end the luck continued to shine favourably on the visitors’ over-worked rearguard, this time Breeden’s left-foot shot was saved by the keeper leading to a Harrow corner. A near-post routine saw the ball played to the edge of the box before the striker hammered his shot against the foot of the post.

To say the visitors were riding their luck was an under-statement, but the longer the half progressed, the more comfortable they looked at the back, Harrow’s attacking threat receding as the conditions took over and the game became the scrappy battle it had always threatened. This suited Harrow’s opponents, but even so, it was a surprise when they opened the scoring a few minutes before the break from a rare foray forwards. A fight for the ball in midfield saw the Harrow back four disjointed and allowed a simple ball down the inside left channel. McGuinness raced off his line but the striker showed excellent composure to dink the ball over the dive and into the far corner.

A rather fraught half-time team-talk followed, but with rolling subs restricted to League competition only, McGuinness resisted the temptation to make wholesale changes, instead bringing on Alex Gilbert at right-back with Alex Breeden pushing into midfield at the expense of the unfortunate Robinson, who had looked one of the few players on the pitch capable of mastering the conditions effectively.

The second half began with encouraging signs for the hosts as they once again forced the visiting keeper into a superb save. This time, left-back Hamish MacIntyre was the unlikely source of the effort with a volleyed shot from twenty-five yards out that was destined for the top corner until the tall Wimbledon keeper flung himself to his right to tip the ball over the bar.

It was a save that was to prove vital, as minutes later Wimbledon doubled their lead. Alex Breeden, who had, as usual, played on edge throughout the game, gave away a free-kick on the right wing, leading to some brief scuffling and shoving which required the intervention of referee Adam Knight. A Wimbledon midfielder whipped the ball across the box and it continued unmolested on its trajectory into the far corner of the goal, the Harrow keeper anticipating a touch from a striker that never came.

But to Harrow’s credit they persevered. Cyprian Owen Edmunds was brought on to replace Ed Beecham and Harrow continued to press forwards, creating another good chance when James Breeden cut in from the left only to see his shot well saved at the near post.

On the hour, the hosts finally gained reward for their endeavours, although they were possibly fortunate with the penalty decision awarded in their favour. Alex Breeden fed Owen Edmunds inside the box and he fell under a challenge from the keeper, how much contact there was remained a mystery to those on the touchline. With no VAR to overturn the decision, James Breeden stepped up to dispatch the spot kick and Harrow were back in the tie with half an hour remaining.

The game continued to prove a scrappy affair, with both sets of players now struggling to string together more than a handful of passes on the astroturf. It was fortunate, therefore, that with just under twenty minutes remaining the hosts enjoyed their second slice of good fortune, removing the necessity to play through the packed defence in front of them when Harry Bick’s deep cross from the right touchline flew straight over the Wimbledon keeper’s reach and into the far top corner of the net. The fluke sparked wild scenes of celebration on the touchline, the younger Bick not one to let a bit of luck detract from his enjoyment of the moment.

And, inevitably, the goal imbued the hosts with a determination to take the game forwards, with everything to play for in the closing stages. Although, as it turned out, it was the visitors who came closest to snatching a winner late on, an almost identical free-kick from wide on the Harrow right was again arcing into the far corner before McGuinness dived to his left to divert the ball wide.

Extra-time saw the final Harrow change of the game with Jamie Jordache, who was by that stage so cold he was questioning the very future of his existence, finally entering the fray, replacing left-back Hamish MacIntyre who had been struggling with injury for much of the game.

The first fifteen minutes were disappointing from both sides, with little by way of progressive football being played, the visitors especially keen to lump the ball forwards at every opportunity. And it nearly paid dividends for them, too, with an early opportunity that really should have been taken. A cross from the left found a midfielder unmarked on the penalty spot but he somehow shanked the ball wide with the goal at his mercy.

It proved, unfortunately, only a temporary let off for the Blues. Straight from the re-start Wimbledon pumped the ball long towards the Harrow penalty area, the knock-down was collected, played inside and an excellent first-time finish was dispatched low inside McGuinness’ near post, the Harrow keeper left with no chance as the ball fizzed past him along the turf.

Perhaps for the only time in the game, the hosts then made life difficult for themselves, continuing to try to play their way out of trouble when, in fact, it just made life very comfortable for their opponents. Wimbledon pressed up the pitch, denying Harrow the time or space to clear their lines and, as a result, the ball was barely out of the Harrow half. In desperation, McGuinness threw men forwards late on, but it was in vain, with hardly a chance created and the full-time whistle signalled the end of Harrow’s Dunn challenge for another year.

It had been a solid effort by the fourteen players, with the missed chances in the Blues’ early period of dominance undoubtedly costing them later on. With slightly more clinical finishing, and a bit more luck, the hosts could have found themselves a couple of goals to the good and the game would surely have ended with a different outcome.

Indeed, the luck seems to have temporarily deserted the side in the Dunn over the last few seasons, with the draw proving especially unkind: the Old Alleynians, the Old Carthusians and now KCS Wimbledon have put paid to Harrow’s challenge – these sides currently fill three of the top four places in the Premier Division.

The OHAFC now enjoy a well-earned rest over the Christmas period before playing their final seven League fixtures remaining. There is still plenty of work to be done to ensure the team are not dragged into a relegation scrap, thoughts of Cup success must wait for another year.