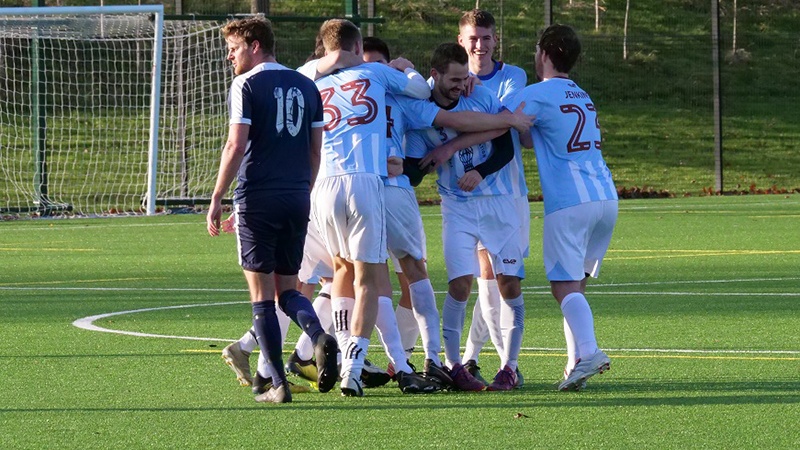 The OHAFC 3rd XI slumped to a disappointing 3-0 defeat at home to the Old Shirburnians on Saturday afternoon, leaving the side still with only a solitary win in their last nine League games. In tricky conditions on the Harrow School astroturf, with a swirling wind blowing throughout, the hosts were outclassed for much of the contest by a slicker, more cohesive Shirburnians side. Two goals in two minutes midway through the first half established a comfortable lead for the visitors and they sealed the win in the final ten minutes to climb to third in the Division Four table, the OHAFC remaining in sixth.

It was a disappointing afternoon for skipper Ed Nicholson and his men, following an encouraging 1-1 draw at home to the Old Stoics, also on the astroturf, the week before. This time, however, it was clear from the outset that the Shirburnians, who earned promotion from Division Five last season, would prove a tougher opponent and for much of the game it was the visitors in the ascendency.

With a strong wind blowing across the pitch, the last thing the OHAFC needed was an early injury to one of their key players, but with barely half an hour gone, Max Curry limped off with tendon damage to the top of his foot. A later examination would suggest a recovery period of around a month, bad news indeed for the 2s.

By this stage the Shirburnians were already displaying more confidence on the ball and a greater threat in attack, and in a devastating two-minute spell midway through the half, the visitors scored twice to take a firm grip on proceedings. A long throw from the left was flicked on at the near post and, as Harrovians dithered, a Shirburnian forward pounced and swivelled to fire the ball in at the near post. Barely two minutes later, with the hosts still trying to establish their pattern of play, a superb second was netted by the visitors, Pittalis beaten from twenty-five yards out by a dipping shot that flew straight over his outstretched dive, but just under the crossbar.

Skipper Ed Nicholson made some immediate changes, with Ed Massey, Anson Lo and Mikey Watford coming off the bench, but the switch had little impact on the flow of the game, with the Shirburnians continuing to look the more lively threat.

That changed after the break, however, as the Blues enjoyed their best spell of the game following half-time. Geoff Taunton-Collins made several trademark driving runs down the right and twice the ball fell to Watford in promising positions but both times he rather rushed his efforts, trying to chip the keeper from narrow angles and allowing easy saves to be made.

The closest the hosts came to scoring was, in fact, from an up and under that saw the Shirburnian keeper scrambling backwards under huge pressure from Mikey Watford, the ball somehow staying out of the goal despite both players ending up in the back of the net.

The Shirburnians looked comfortable with their lead as the game wore on, hitting the outside of the Harrow post with a near post header from a corner. And they ensured there would be no late fightback with a well-taken third in the final ten minutes, a clinical through ball allowing the striker a one-on-one against Pittalis that was taken with consummate ease.

The Blues have just five games remaining after the Christmas break with which to secure their Division Four future, with the two fixtures against bottom sides Old Salopian 2s and Old Bancroftians likely to determine whether or not sufficient points can be garnered.