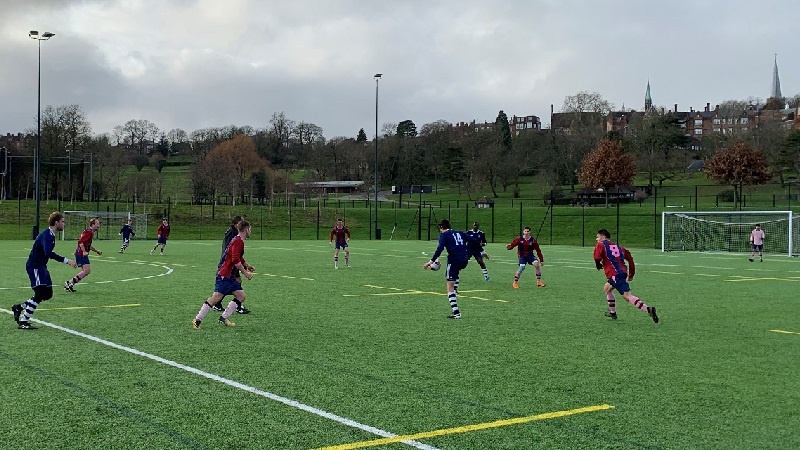 The OHAFC 2nd XI were left counting the cost of a further slew of missed chances and, remarkably, their third consecutive League game without scoring a goal, as they eventually ended 2019 well beaten by Division Two leaders the Old Carthusians 2s on the Harrow School astroturf on Saturday afternoon.

The top two sides were thrown together in the weekend preceding Christmas for the second season in succession and, as was the case in 2018, it was the visitors who left for the holidays full of festive cheer, again scoring three times to consolidate their place at the top of the table.

With regular starting centre-halves Tom Ward and Harry Woolley both ruled out through injury, skipper Geoff Taunton-Collins was forced to deploy defensive midfielders Alexi Pittalis and Ed Beecham in their stead. But otherwise the squad was a strong one, with even Jack Alhadeff available for his first appearance of the season, the winger back from San Francisco for the holidays. Gbeminiyi Soyinka lined up in attack with Pablo Hutchinson dropping back into midfield, the side’s two outstanding players this season, wingers Tristan David and Andres Hutchinson, flanking the centre forward.

With heavy rain having consistently fallen in the build-up to the game, there was no option other than to utilise the 4G astroturf surface – the first time this season the OHAFC 2s had played on artificial grass.

But the hosts made an excellent start. Following a brief spell of Charterhouse pressure, it was the Blues who began producing the early moves of note, Tristan David prominent down the left and Gebeminiyi Soyinka in the thick of the action up front. There was also an early indication that the Carthusians goalkeeper may not be their regular between the sticks: a low drive from the edge of the box by Pablo Hutchinson was bizarrely sliced over his own crossbar by the keeper’s right boot. The Blues needed little further encouragement to test him further.

But despite several opportunities, they could not find a way through. David crossed from the left only for the ball to take a slight deflection off a defender, Soyinka waiting unmarked in the middle. Lederman then produced an almost identical ball, this time sending the forward clean through but the finish was weak and allowed the keeper to block. But the main talking point of the half, and indeed probably the key incident in the whole game, arrived soon afterwards when Andres Hutchinson was sent clean through the middle. With Soyinka in support and just the Carthusian keeper to beat, a goal seemed inevitable. The wide man unselfishly squared, Soyinka tapped in, but referee Anderson ruled the latter had been in front of the ball and gave a highly contentious offside decision.

At this stage it seemed a matter of time before the Blues took the lead, but, as is so often the case in football, a failure to take chances is likely to be punished and this occasion was further proof. On the half-hour mark a Charterhouse corner was cleared to the halfway line but the visitors stormed forwards in breath-taking fashion, working the ball out to the left wing before a slick one-two allowed the wide player to fashion a pin-point finish from an acute angle into the far top corner.

Understandably, the goal took the wind out of Harrovian sails somewhat and for the remainder of the half the hosts hung on to stay in the game. Several corners were defended, one effort cleared off the line and a breathless half was brought to an end with the visitors a goal to the good.

Despite a full bench, skipper Geoff Taunton-Collins sent the starting eleven back out into battle, charged with recovering their early momentum and achieving something the side had, at that stage, failed to do in 225 minutes of League football: score a goal.

And for the opening twenty-five minutes of the half, the Blues threw everything at their vaunted opponents, again enjoying the bulk of the play and again creating several excellent opportunities. The best of them mirrored the Charterhouse opener, with a slick move working the ball out to the left wing where Ollie Curry produced an enticing cross to the far post: Pablo Hutchinson just failed to connect, but Lederman timed his run to perfection, only to then fire his volley over the bar, the veteran leaning back as he connected.

Doug Pratt and Ed Massey were introduced off the bench and, with the home side becoming ever more desperate to avoid a crushing defeat, Jack Alhadeff followed for his first appearance of the season. And the substitute immediately began causing problems with his inside runs from the right wing, on scampering run into the box saw the Carthusian keeper race off his line to intercept, only for the ball to fall to Lederman just outside the box – disappointingly, his attempted chip landed on the roof of the goal.

And, somewhat predictably, the Blues were eventually made to pay for their profligacy in front of goal as the visitors snatched two late goals to settle the matter. A fine cross from the left wing bisected Pittalis and Beecham inside the box and a deft header flew past Walsh into the far corner. The third was also expertly taken, a through-ball down the inside right channel ending with a perfectly-placed lob over the advancing Harrow keeper.

It was cruel luck on the Harrow side who deserved more for the quality of their play, although it wasn’t a particularly tricky post-match dissection: the Blues missed some fairly simple chances that on another day would have seen them score two or three; the Carthusians created little, but took their three goals with aplomb.

The defeat leaves the home side with little room for manoeuvre in the Division Two title race: Carthusians stretch their lead at the top to nine points having played two games more than the OHAFC. The Blues must somehow, by hook or by crook, rediscover their scoring mojo in the second half of the season if they are to convert their superb start into tangible reward come May.