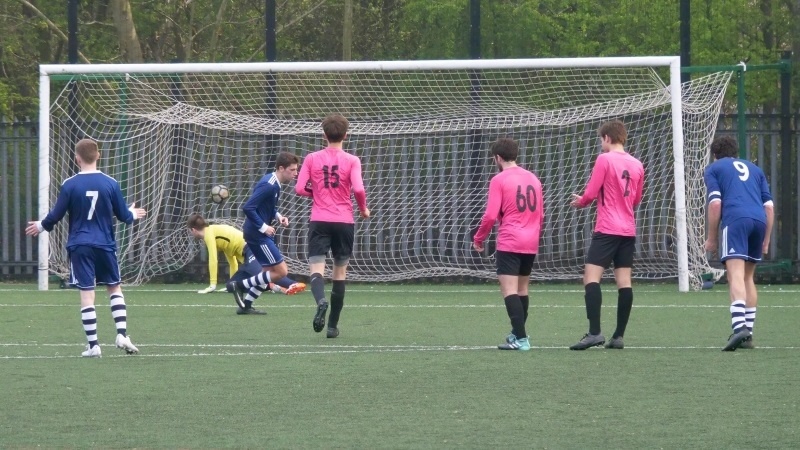 The OHAFC 2nd XI produced one of their most resilient displays of the season on Saturday morning to twice come from behind and claim a well-deserved point against the Old Westminsters in east London, in the process severely denting their opponents’ promotion prospects.

An early onslaught from the hosts yielded a well-worked goal after ten minutes and at that stage a repeat of last season’s 5-0 loss looked a distinct possibility. But the Blues showed great fortitude to claw their way back into the game, levelling shortly before the break when a loose pass in midfield was collected by David Lederman and he fed Andres Hutchinson to beat the keeper at his near post.

The second half saw chances for both sides at a premium with defences holding firm. Westminster’s one precise passage of play with fifteen minutes remaining saw them create an opening down the Harrow left that ended with a well-placed shot being drilled past Kyri Pittalis. But again the visitors refused to throw in the towel and they were rewarded for their efforts just five minutes from time when Alexi Pittalis was clattered into by the Westminsters keeper following a free-kick. Referee Alan Smithee pointed to the spot and Hutchinson held his nerve, placing the ball into the bottom corner with his trusty left foot to earn the Blues their first point away to Westminsters in Division Two in the past decade.

The draw lifts the side above Chigwell 2s into sixth in the Division Two table and with both sides having just a solitary fixture remaining, gives Geoff Taunton-Collins’ men a great chance to claim the highest League finish for an OHAFC 2nd XI since the 2008/9 season when the team, then led by Charlie Reid and Harry Woolley, finished 4th. Indeed, there just three 2nd XI sides now sit above the OHAFC, the traditional powerhouses of Charterhouse, Eton and Forest.

Saturday’s result was founded on a disciplined, organised defensive display, with the back four of Jonny Lalude, Jack Orr-Ewing, Alexi Pittalis and Emre Sert performing as if it was their hundredth game together, not their first. Backed up by the hard-working Monroe brothers and a rejuvenated Archie Maxwell, clearly far more at home in midfield than at the back, the visitors offered far greater resistance than perhaps was to be expected.

Following a rather rocky opening quarter of an hour, when Westminsters continual drilled balls over both full-backs caused initial problems, the Harrow back four soon found their line and began to frustrate the tactic to good effect. The hosts still enjoyed more of the ball, and looked the more composed with it, but aside from forcing a number of corners, they were restricted from creating any clear-cut chances.

In truth, the Blues struggled to work the ball competently on the huge artificial surface, with the front players too often isolated and left to chase loose causes. Whenever the ball was retained for a few passes, however, the visitors displayed enough initiative to suggest they could hurt their opponents, although the equaliser, when it arrived, was something of a gift – a rare stray Westminsters pass across the pitch landed at Lederman’s feet and he threaded the ball through to Hutchinson who made no mistake, comfortably beating the keeper at his near post.

The Blues’ defensive resilience continued after the break to great effect, with Kyri Pittalis barely troubled in the Harrow goal. Younger brother Alexi produced numerous towering headers at the back and Jonny Lalude displayed his customary strength and battling qualities at right-back to great effect. One flying save from the keeper late on was notable merely because it was such a rare example of athleticism required from the Harrow stopper.

There was little the Blues could do about Westminsters’ second goal, a fine move that saw the ball worked from left to right and ended with a pinpoint low finish being drilled across goal just inside the far post. The exuberant celebrations that followed hinted at the importance of the result to the home side.

But very different emotions followed soon afterwards when referee Smithee pointed to the spot following the coming together that saw both Alexi Pittalis and the Westminsters keeper pole-axed on the floor. Fortunately, both players were fine and able to continue. Hutchinson held his nerve and the visitors hung on with little trouble to ensure their efforts had not been in vain.

Great credit to the twelve players who travelled, not least to James Monroe, who battled on throughout the second half with a groin strain, enabling Lederman to rest his own similar injury on the side. And Ed Payne made a useful contribution in midfield, showing typical Payne tenacity and a few neat flicks on his 2nd XI debut.

One game remains for the side, with Lancing 2s due to visit the Hill in a fortnight. There is every chance they will need to win to avoid relegation, merely propagating the fact that in this division, there is never an easy game…