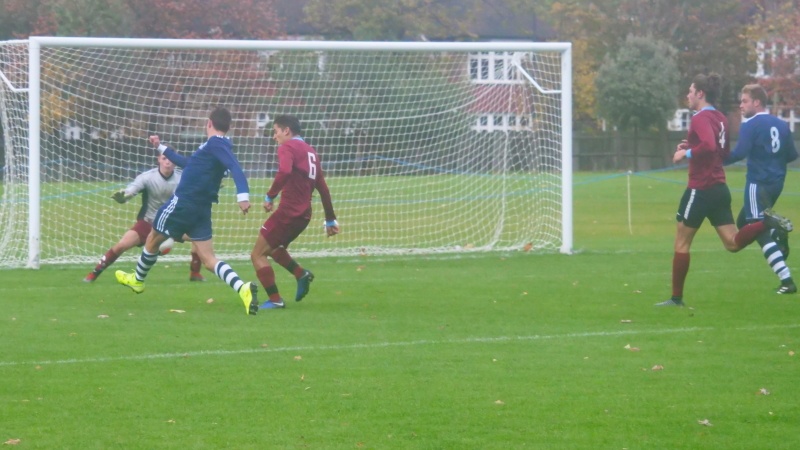 The OHAFC 2nd XI continue to sweep all before them in Division Two of the Arthurian League, this time putting the Chigwellians 2s to the sword on a windswept Harrow Hill with a further display of clinical finishing and resolute defending. For the second time in the campaign the Blues scored six but, almost more pleasingly, they managed to keep a first clean sheet of the season and now lead the Old Carthusians 2s in second by three points, Citizens three points further back.

Given the impressive start to the season, it is unsurprising that availability remains particularly strong, with skipper Geoff Taunton-Collins able to name a squad of thirteen for the visit of a Chigwell side aiming to overtake the Blues at the summit of the table prior to Saturday’s game. Lederman and Massey were the unlucky two to start on the side, the greater physical presence of Ed Beecham and the Curry brothers preferred in midfield given the nature of the conditions, although, in truth, the apocalyptic forecasts proved slightly exaggerated, with the winds on the Hill only marginally stronger than usual and the rain staying away for all but ten minutes of the encounter. 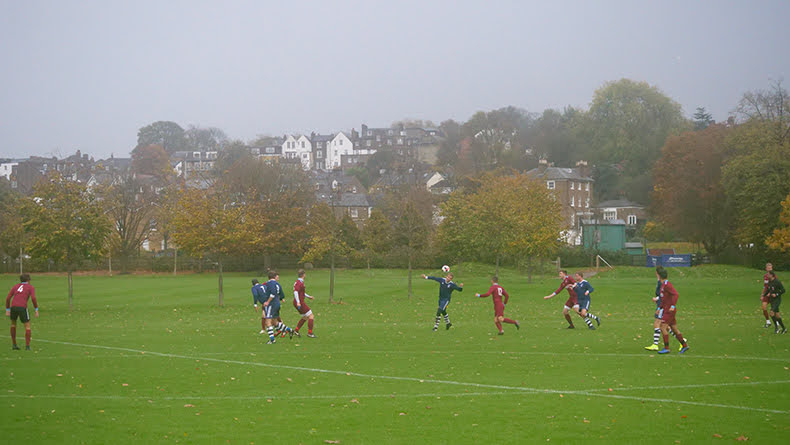 Whether or not it was the early start to watch the rugby World Cup final or the rather bizarre breakfast concocted by the skipper at his flat (plain potato waffles slow-cooked in an oven that had never been used previously), the Blues made a slow start to the game, with the first twenty minutes offering little by way of goalscoring threat but plenty of mis-placed possession and several anxious moments. The visitors looked sharper on the ball, quicker in the challenge and surer in their ideas, with the ball switched out to both flanks, the left winger in particular looking dangerous. Walsh was barely troubled in the Harrow goal, but his back four were clearly the more worked of the two, the Chigwellians living up to their pre-match billing as the strongest side the OHAFC had faced in the League this season.

But this rather ugly struggle was suddenly punctuated by a moment of sheer brilliance from left-winger Andy Hutchinson, who collected a pass from older brother Pablo ten yards inside the Chigwell half and set off with just one thing on his mind: brushing past several challenges, he drove into the box and smashed the ball past the keeper from fifteen yards out, leaving a trail of forlorn Chigwellians in his wake. 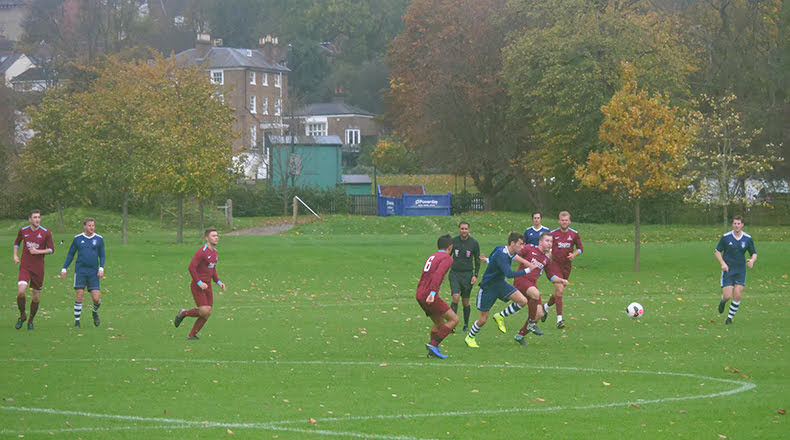 Harrow slowly woke from their slumbers as a result but were counting their blessings soon afterwards when an incisive through-ball gave the visitors a golden opportunity to level the scores. Fortunately, the runner from midfield took a heavy first touch, sending both the ball and the player himself into Charlie Walsh, who had come off his line to block. After a delay of several minutes the Harrow keeper pronounced himself fit to continue, a nasty knock on his shin the sum of his suffering.

The game gradually became more fractious as the visitors appealed constantly to first-time referee Hitesh Jansari over every decision made. Fortunately, the official’s rather phlegmatic approach seemed to diffuse much of the angst.

But the visitors soon had far more to worry about than the odd throw-in decision as they conceded three times in a twelve-minute spell prior to the break, the hosts displaying their ruthless finishing ability to the full with a variety of efforts past their stunned opponents. 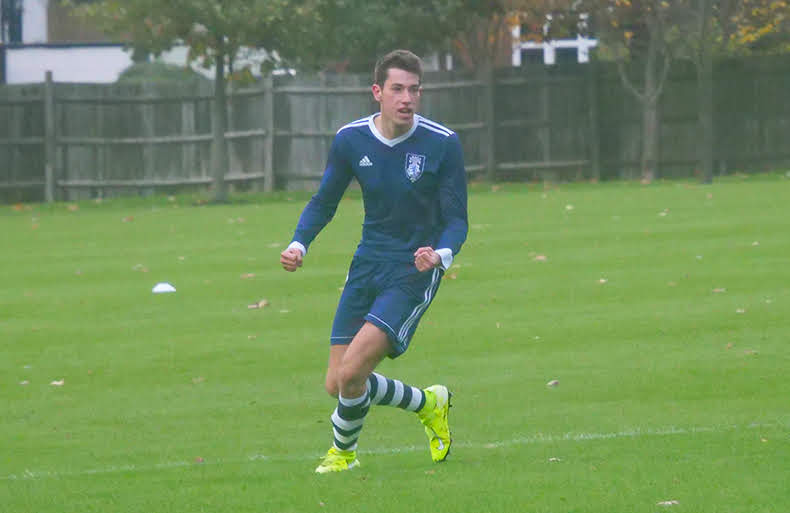 Ollie Curry supplied the second with another superb free-kick into the box that older brother Max flicked in – the second precise set-piece delivery that has led to a goal in consecutive games. The third, six minutes later, was also a result of brotherly co-operation, with Pablo Hutchinson teeing up Andres for the second time in the game. On this occasion, however, the assist was perhaps more special than the goal, with a lovely cross from the right almost begging the side’s leading scorer to finish. And Andres didn’t disappoint, cushioning a volley in with his trusty left foot. And a similar effort brought Harrow’s fourth, five minutes before the break. This time it was the skipper who supplied the cross, curling the ball over the Chigwell defence from the right, to the waiting Soyinka just inside the box. To Chigwellian consternation, the striker was allowed to chest the ball down, turn and fire into the net with barely a challenge of note arriving.

From seemingly nowhere, the Blues had opened up a match-winning advantage and it could have been even better, Soyinka somehow missing an almost unmissable chance to score a fifth when he cushioned the ball towards goal following another cross from the right allowing the defender on the line to block and then scramble to safety. 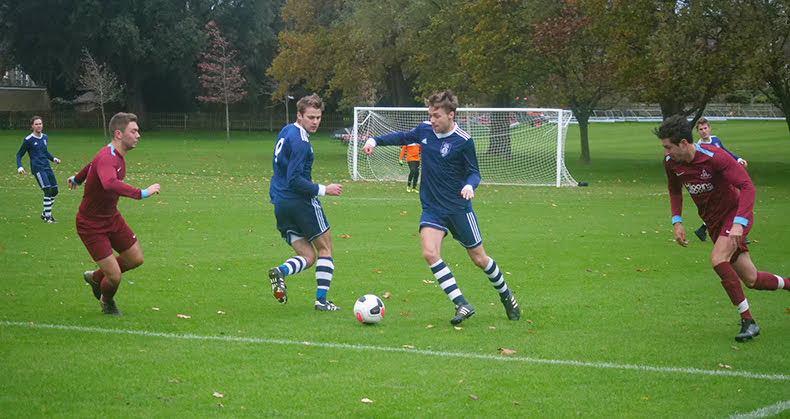 Having played with the wind in their favour in the first half, the Blues were under no illusions that the second forty-five minutes would prove a much stiffer test, but with the visitors having been restricted to a few half-chances and little else, there was a determination to not just see out the win, but claim a first clean sheet of the season.

That particular objective seemed a distant prospect early on, with Chigs forcing the hosts deeper and deeper into their half. Goal kicks for Tom Ward became a regular trial of kicking strength and technique and, on the whole, the centre-half coped mightily well. The same could not be said of the visitors’ shooting however, with regular efforts fired high and wide and miles behind Charlie Walsh’s goal as pressure built on the Harrow rearguard. 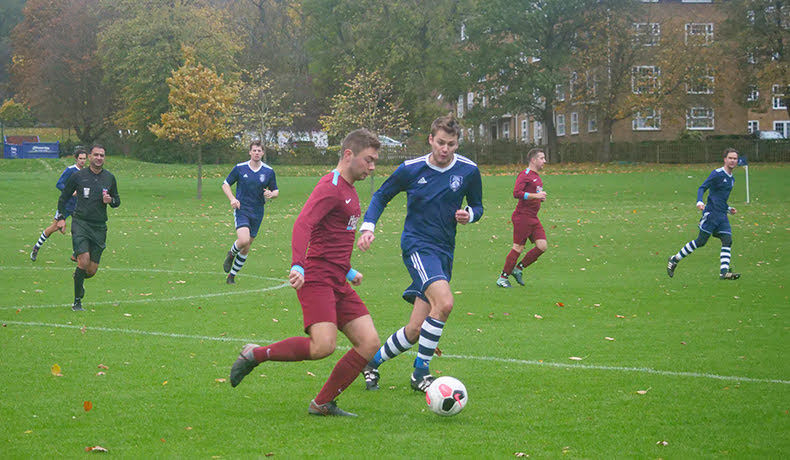 Whilst the play was concentrated for long spells in the Harrow half, the visitors had actually appeared more threatening in the first half. Bizarrely, their left-winger, who had proved a handful for the Harrow right-backs, was now playing in goal. On the other side, the Chigs right winger was also quick and technically sound, but was regularly closed down by two or three blue shirts at a time, Harrow shuffling across the pitch effectively to protect the back four and goalkeeper. It was telling that the closest the visitors came to scoring was courtesy of a cross, the ball slipping through Walsh’s grasp and rebounding off the top of the post before being safely gathered. It was a rare error in another otherwise sound performance from the man with the dodgy knee.

With any hope of a potential comeback receding, Chigwellians returned to concentrating their efforts on the referee, who was this time in the firing line for failing to stop his watch every time the ball went out of play, despite making it clear he would be adding on additional time.

As the rain began to fall, albeit briefly, the Blues wrapped up the win courtesy of a couple of breakaway goals. Andy Hutchinson was freed down the left and having tried and failed to go round the keeper himself, he unselfishly squared for Soyinka to slot home at the far post. And the striker was then presented with the opportunity to complete his hat-trick in the closing minutes, Lederman’s long clearance from the edge of the Harrow box sailing over the Chigs defence and allowing his teammate to charge through, shrug off a rather tame challenge and finish in style – Gbeminiyi’s 99th goal for the OHAFC since the start of the 2009/10 season. 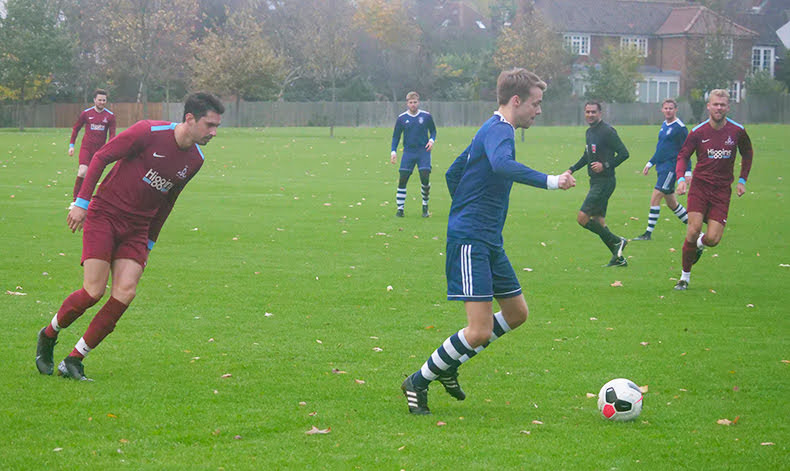 It was another highly satisfactory performance from the OHAFC 2s, who currently appear to have few weaknesses in their armoury: solid at the back, lethal up front, with a perfect blend of youth and experience, strength and quality on the ball and options for every position – this latest win was achieved without both midfield lynchpin Alexi Pittalis and left-winger Tristan David, arguably the side’s player of the season to date.

The team now enjoy their first break of the season but will resume hostilities in a fortnight with a huge fixture – the visit of the Old Citizens to the Hill. Citizens sit fourth in the table but have lost just a single fixture this season, having scored the second most goals (after the OHAFC) and conceded the fewest. Their League position was dealt a blow following a late cry-off against the Carthusians this weekend that saw them docked three points, but they will arrive on the Hill desperate to become the first side to dent the OHAFC’s perfect record -