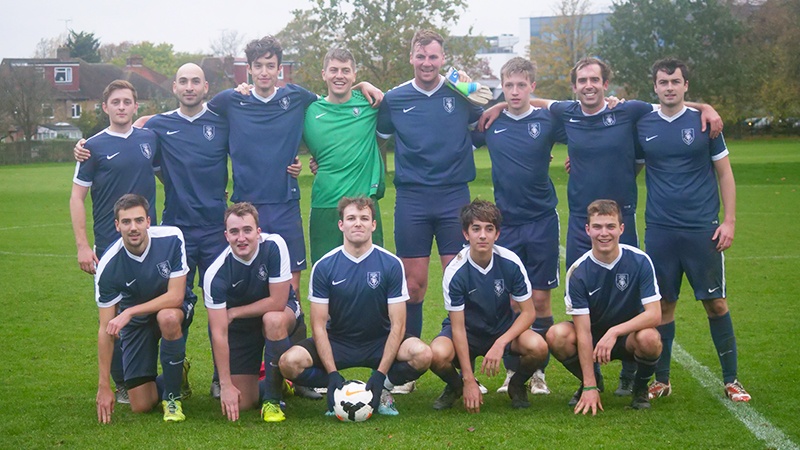 A new-look OHAFC 3rd XI under the leadership of Ed Nicholson produced a stunning upset on Saturday afternoon when they defeated the previously unbeaten Old Alleynians 2s 2-0 on the Hill. The two sides had met just a few weeks previously in south London and, embarrassingly, the OHAFC conceded double-figures – only the second time a Harrow side had suffered that particular fate in the last eleven seasons of League football. But on Saturday it was an entirely different story, with a youthful OH side containing three debutants battling to a superb victory courtesy of goals from Cameron Mahal and Mikey Watford. The win lifts the 3s into fifth in Division Four.

A lengthy debate was held in midweek involving the OHAFC hierarchy regarding the future of the 3rd XI and some of the star players who have contributed so much to the side’s success recently. With the 2s flying high in Division Two and a large squad to select from, the unexpected progress of the 1st XI in the Premier Division has been brought into sharper focus, with the belief that some of the top 3s players should be helping that particular cause rather than struggling in mid-table in Division Four. The upshot was that of the squad of thirteen named for the 3s fixture at home to the Alleynians on Saturday, the only regulars that remained were Harry Bick and Oscar Gairard. Ed Nicholson led the side, having captained the 4th XI last season, and formed an experienced centre-half pairing alongside former 3s stalwart Theo Gordon. Toby Colehan, at the back, and Cameron Mahal, up front made their OHAFC debuts, Philip Richardson doing likewise off the bench. The remainder of the side included young players with a handful of OHAFC appearances between them. 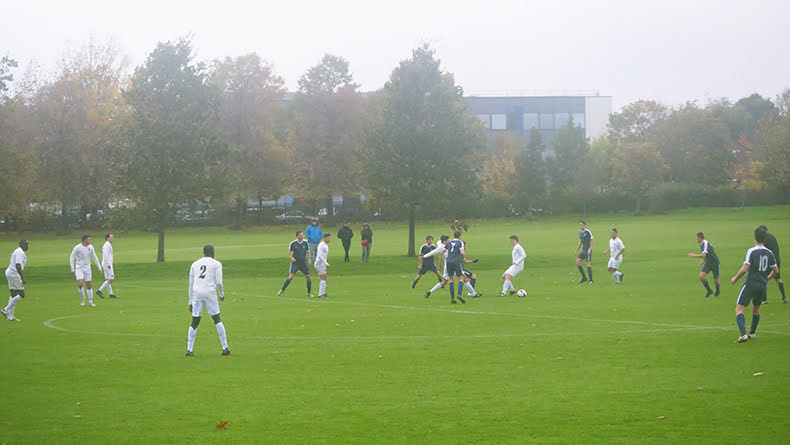 Fortunately for both sides, the shockingly bad weather forecast proved a slight exaggeration, with the strong wind making things tricky but hardly unplayable. And the Phil pitches have also improved with the recent rainfall, the surfaces now slick and perfectly manicured.

Understandably with a side that had never played before and containing a number of new faces, it took the hosts a while to find their feet. The hitherto unbeaten Alleynians arrived full of confidence, having scored a remarkable 36 goals in their previous five matches, and they set about their opponents from the off, creating a number of chances. Stand-in goalkeeper Hugo Nicholson performed excellently between the posts and the Harrow back four stood firm, frustrating the visitors. 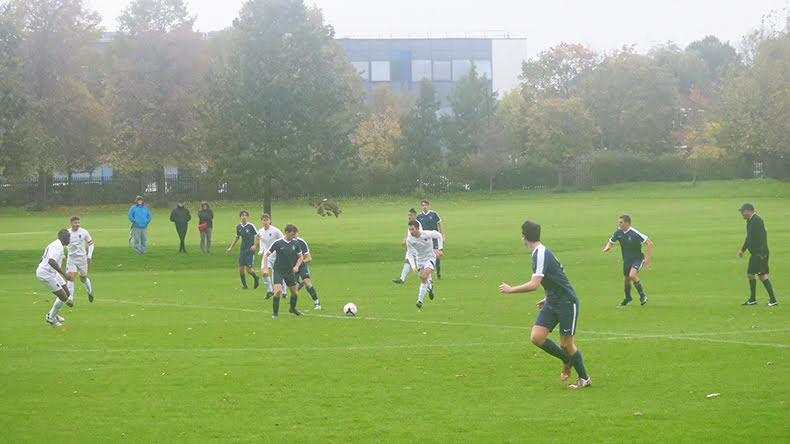 As the half wore on, the Blues began to enjoy more of the ball, Harry Bick looking lively up front, and the contest developed into a more even affair. Then, just after the half-hour mark, the hosts took the lead, debutant Cameron Mahal finishing superbly at the second attempt after his first shot had been saved by the Alleynians keeper.

The goal lifted the home side almost visibly, the team playing with far more confidence and belief. Wingers Michael Brooks and Oscar Gairard threatened down both flanks and Bick continued to make a nuisance of himself, running the channels as if his life depended on it. The visitors were left in little doubt that this was a very different Harrow side to the one they had faced in Selhurst a few weeks ago. 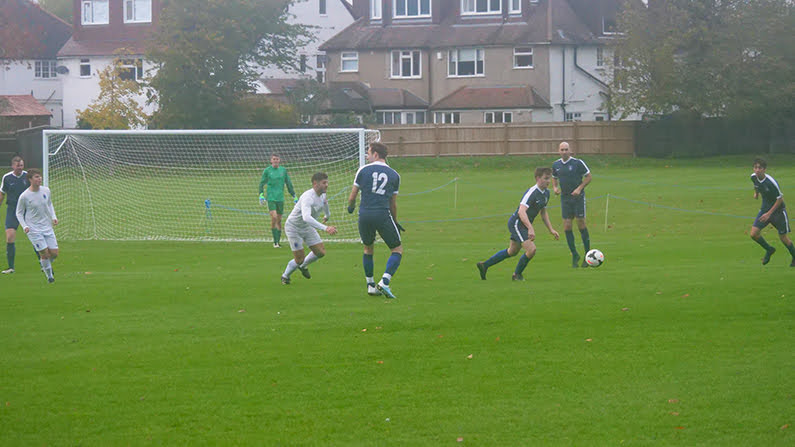 At half-time Nicholson brought on both substitutes, Philip Richardson earning his first taste of Arthurian League football. But, just as in the first half, it was the visitors who pressed forwards, again causing numerous problems for the Harrow back four in their desperation to overturn the deficit. But once more the Harrow back four stood firm, superbly marshalled by the skipper, Ollie Spray, Theo Gordon and Toby Colehan all worked tirelessly to protect Hugo Nicholson in the Harrow goal. Several attempts did require the keeper’s intervention and he proved up to the task, making an excellent save to maintain the hosts’ lead.

Once again, as the half wore on, the hosts pressed forwards, driven by the tireless Jamie Jordache in midfield. The Blues forced a series of corner but couldn’t find a way through. The Alleynians skipper found the turning of the tide too much to bear and he launched into a tirade of abuse at referee Alan Greenberg, who promptly sent him to the sin bin for ten minutes. This only increased the pressure on the Alleynians but this time they held firm, managing to keep the deficit to a single goal as their skipper returned from the naughty step. 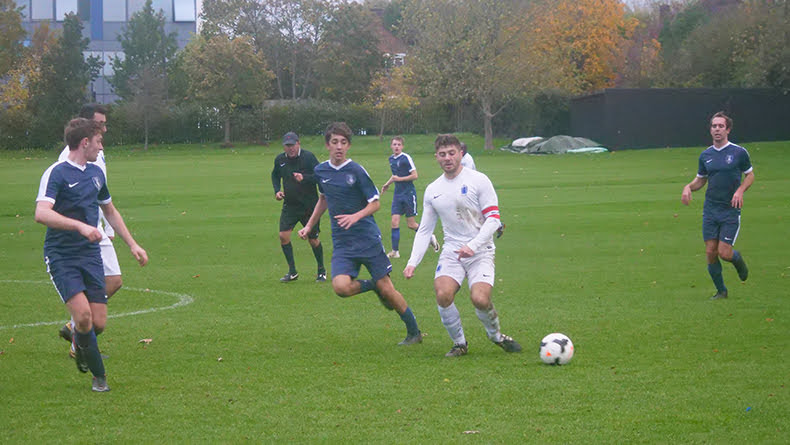 But with twenty minutes remaining, and the game on a knife edge, the hosts scored the vital second goal. A frantic passage of play saw no less than three Harrovians all fire off shots from close range before substitute Mikey Watford poked home at the fourth attempt – his second OHAFC goal in just three substitute appearances – to send the home side wild with delight.

The team now had a lead to hold on to and they did so in style, urged on from the sidelines by the watching 2s, who had just completed their own win over Chigs. The final whistle signified the conclusion to a remarkable win that can hopefully act as a springboard to future success for the 3s going forwards. 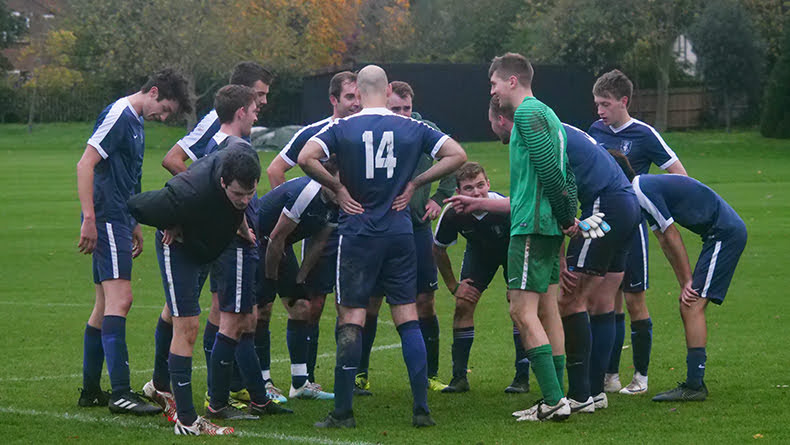 It was a superb effort from all thirteen players, hopefully all of whom will return to play in future weeks. The 3s have no time to rest on their laurels however, with the Old Bancroftians due on the Hill this Saturday for the first round of the Junior League Cup.

*Thanks to skipper Ed Nicholson for his assistance with this report