The OHAFC 1st XI were forced to settle for a point on Saturday afternoon following a 1-1 draw at home to Premier Division strugglers the Old Salopians. In a drab encounter played in wintry conditions on the Hill, the hosts took the lead just after the half-hour through a George Gould penalty after Alex Gilbert had been bundled over inside the box. But the Salopians enjoyed the better of things after the break and levelled with just under half an hour remaining. The point leaves Fraser McGuinness’ side sixth in the Premier Division.

With leading scorer James Breeden and fellow striker James Tippett bot unavailable, Saturday was always going to prove a stern examination of the Blues’ ability to score goals, even against a defence as porous as that of the Old Salopians, who prior to this fixture had conceded eighteen times in just five games. Alex Gilbert was the man charged with leading the attack, with Alex Breeden moving out of defence to play on the right of a five-man midfield and Dan Firoozan on the left. The welcome addition of Kyle Barrett and Charlie Bick ensured added steel to the heart of the defence and added quality in the middle of midfield. 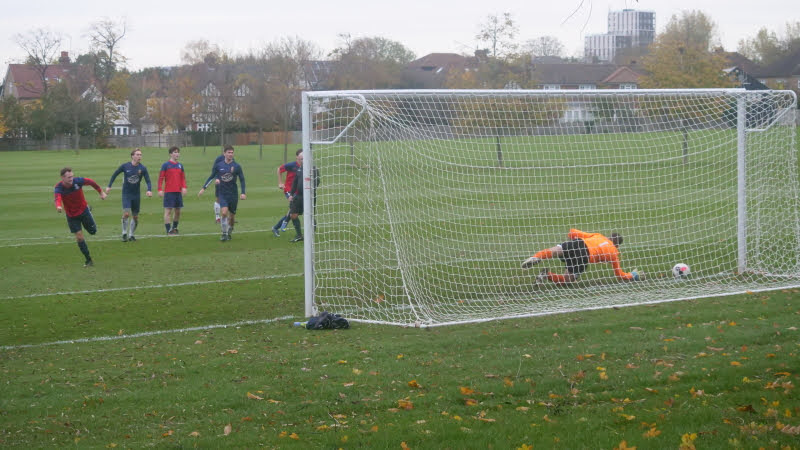 But the first half proved as grey as weather conditions, with little enterprising football on display from either side. The visitors appeared content to get men behind the ball and await opportunities to counter, a tactic that saw Harrow skipper Fraser McGuinness barely have a shot to save in anger until just a few minutes before the break.

But from a defensive point of view the tactic proved efficient at stymying Harrow’s ability to create chances, with forward passes taking too long to materialise due to the peculiarly Harrovian weakness of wanting to take unnecessary additional touches on the ball. Whenever the Blues did move the ball with purpose and haste, they found men in space, Alex Breeden looking a particular threat down the right wing. Sadly, a couple of decent crosses found only Salopian feet and, like his opposite number in the Harrow goal, the Shrewsbury keeper remained untested.

That was until midway through the half when the home side managed to muster a couple of decent chances: Kyle Barrett rose well at a corner only to see his powerful header hacked clear off the line, Breeden then fed Dan Firoozan down the inside left channel but he could only screw his shot wide of the far post as the keeper advanced.

Fortunately, the Salopians then gifted the hosts the opportunity to take the lead from the spot when Alex Gilbert was rather clumsily bundled over inside the box. Referee George Patriche blew immediately and George Gould stepped up to convert, the keeper guessing right but unable to prevent the ball finding the bottom corner.

But far from usher in a period of Harrovian dominance, the later the half progressed, the more the visitors came into the game. With Harrow still struggling to keep the ball for any lengthy passages of play, the Salopians took advantage to launch some attacks of their own, their best chance arriving just prior to the break when McGuinness had to be alert to dive low at his near post to palm a shot to safety.

The forecast rain duly arrived right on schedule making for miserable second half conditions. And, sadly for those in attendance, the quality of football on display did little to alleviate the cold. Salopians pressed higher up the pitch and with greater intensity, forcing the home side into hurrying their passing out from the back. When the ball was subsequently given away, recriminations followed. Doug Morrison was introduced for Dan Firoozan but change had little effect, with the home side struggling to bring their attacking players into the game.

The visitors, despite competing on more even terms, still struggled to create any chances of note and if the home side didn’t exactly look comfortable, there was no cause for alarm either, McGuinness still limited to kicking duties and little else. But having played a short pass out from the back, the Harrow back four were left exposed when Kyle Barrett slipped to the turf and a return pass through the heart of the defence allowed the Salopian striker to stride forwards and level the scores.

The hosts responded and created a couple of chances of their own that really should have been taken, Doug Morrison missing perhaps the best of them when he failed to hit the target from just outside the box with the keeper out of position. The Blues did have the ball in the back of the net in the final moments, Kyle Barrett bundling in from a few yards out, but the referee’s whistle blew for an earlier foul and the ‘goal’ was chalked off.

Indeed, the full-time whistle was almost universally well received, with players and spectators alike keen to return to the sanctuary of the Alcock Pavilion and some warmth and cover. A classic this most certainly was not, but with their main attacking threat absent and a stoic Salopian side in front of them, the point was no disgrace as the OHAFC continue to fight their way through their first season back in the Premier Division.

Another tough challenge arrives on the Hill next weekend, with the visit of KCS Wimbledon Old Boys. KCS have improved in recent seasons, finishing second behind Charterhouse in the Premier Division in May, and go into Saturday’s fixture as the only unbeaten side in the Premier with four wins and two draws from their six matches. Hopefully a more entertaining encounter will ensue.