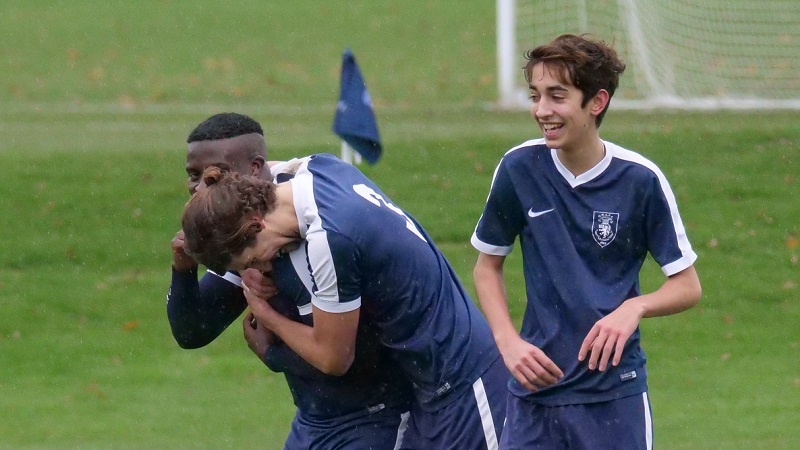 The new-look OHAFC 3rd XI continued their resurgent form with a superb 3-1 win over fellow Division Four side the Old Bancroftians to safely secure their passage into the first round of the Junior League Cup. Despite trailing to an early penalty, the Blues drove forwards in the pouring rain and goals from Dan Abu, Mikey Watford and Ade Omisore sealed a second successive victory. The side earn a home tie in round one against Division Two side the Old Sennockians as their reward for another excellent squad effort.

Following on from last weekend’s remarkable 2-0 win over the previously unbeaten Alleynians second string, 3s skipper Ed Nicholson was again forced to ring the changes, with several players unavailable. Nevertheless, there was the welcome return to action for some of the replacements, with goalkeeper David Griffiths, Mo Shah, Arthur Blount, James Monroe and James Walduck all appearing in OHAFC colours for the first time this season, Griffiths and midfielder Dan Abu also making their 3rd XI debuts.

Despite the rain holding off for much of the first half, the Blues made a dreadful start to the game when they fell behind after barely five minutes when youngster Toby Colehan fouled a Bancroftian inside the box and Griffiths was well beaten from the spot. The goal presaged an encouraging start for the visitors, and they set about extending their advantage for the next twenty minutes. The Harrow back four of Spray, Tritton, Nicholson and Colehan were at full stretch but for the most part coped well in protecting the Harrow goal. Nevertheless, Griffiths was called upon to make a couple of excellent saves, one especially noteworthy when he dived full length to his right to tip a rising drive past the post.

But as the half wore on the home side gradually worked their way back into the game, the central midfield duo of Dan Abu and Mo Shah winning plenty of ball and feeding wide men Watford and Monroe, with lone striker James Walduck looking threatening up front.

Nevertheless, when the equaliser arrived, it did so courtesy of the ultimate in route one football: a long driven free-kick from Felix Tritton inside his own half was superbly flicked on by Dan Abu giving the Bancroftians keeper no chance.

The goal sparked the hosts further into life and within ten minutes they had completed the turnaround on the scoreboard courtesy of a brilliant piece of skill by Mikey Watford, who expertly lobbed the keeper from inside the box for his second 3s goal in consecutive games. Given his rather wayward finishing at training on Wednesday night, it is clear this young man adopts the Romario/Ronaldinho approach to his game: save it all for when it really matters.

The goals lifted the confidence of the home side and they closed out the remainder of the half without further difficulty. Half-time saw skipper Nicholson make three changes, with James Cullimore, Ade Omisore and Cameron Mahal, who scored a beauty last week on his OHAFC debut, introduced – Watford, Monroe and Walduck the men to make way.

As the half began, so the rain started to fall, producing testing conditions for both playing and spectating - the trees on the far side of the pitch becoming safe haven for those in attendance. As it was, and not totally unexpectedly, the game became something of an untidy scrap, with neither side able to play enough composed football for long enough to significantly hurt their opponents.

The Blues continued to work their socks off, with the back four continuing to fight to restrict chances on goal – David Griffiths was busy, but was never required to pull off the same quality of saves he had made prior to the break.

Going forwards, the likes of Abu and Cullimore provided the drive through the middle of the pitch, but it was out wide where the source of a vital third goal looked more likely, Mahal frequently involved down the right and Arthur Blount raiding down the left at regular intervals. And it was down the inside left channel that the 3s scored the vital next goal, taking advantage of some excellent play by both players, Blount eventually squaring unselfishly for Omisore to finish comfortably.

This third goal took the wind out of the Bancroftian sails and the Blues never looked likely to surrender their advantage thereafter. The Harrow midfield continued to work tirelessly until the final whistle, by now every player, spectator and the referee all soaked to the bone.

So another excellent victory for the new-look 3s and one that earns them a testing tie in round two: a visit from Division Two side the Old Sennockians. The 3s will have to put any thoughts of Cup glory on the backburner for now however, with an unenviable League fixture now on the horizon: a trip to face the Old Kimboltonians on the astroturf at the University of Hertfordshire. The Kimboltonians remain one of just two sides in the entire Arthurian League still maintaining a 100% win rate in the League this season (the other being the OHAFC 2s) and will be looking to increase their advantage at the top of the division. It promises to be a stern test of the OHAFC 3rd XI revival.

*Thanks to skipper Ed Nicholson for his help with this report