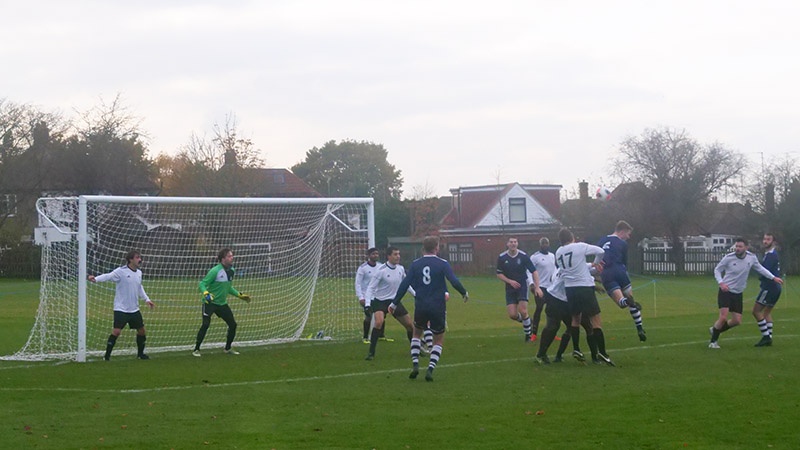 The OHAFC 2nd XI fell to their first League defeat of the 2019/20 season on Saturday afternoon, losing 1-0 at home to the Old Citizens in an ill-tempered affair on Harrow Hill. A tense, tight game saw the hosts miss several gilt-edged chances to break the deadlock in the first half, before the visitors pressed forwards after the break. But the game hinged on a frantic closing quarter of an hour that saw Harrow midfielder Max Curry sin-binned and the hosts fail to ride out the ten minute period without him. Citizens blazed a penalty over the bar before scoring the only goal of the game shortly afterwards. Despite the defeat, the Blues stay top of Division Two, although they have now been caught on 18 points by the Old Carthusians 2s.

It was a hugely frustrating climax to what had been, for the most past, an absorbing encounter between two of the top sides in the division. The hosts, who started with Ed Beecham up front in the absence of both Pablo Hutchinson and Gbeminiyi Soyinka, found plenty of space early on, especially down the left hand side, with wingers Tristan David and Andres Hutchinson raiding forwards constantly. David, especially, looked to have the better of his full-back every time and he was unfortunate not to make more of the time and space afforded to him, several crosses and shots just veering wide of their intended targets.

But it was Hutchinson who really should have given the Blues the lead when he was played through twice inside the opening half-hour, once down the left, once down the right. On both occasions the youngster made the keeper work, but on both occasions he was foiled. The first save, in particular, was an excellent one, the keeper spreading himself to divert a shot that was heading for the far corner. On the second attempt, the forward’s first touch was slightly heavy, allowing the Citizens stopper to narrow the angle and smother from close range. Until the final minute of the match, it was to be the closest the Blues came to scoring.

At the other end, for much of the game, the Harrow defence remained resolute and protected keeper Charlie Walsh superbly. Centre-halves Tom Ward and Harry Woolley both put in strong performances, this despite Ward struggling with a tight hamstring for most of the game. With the experienced pairing of Taunton-Collins and Massey at full-back holding their positions in disciplined order, the visitors were suffocated in their attempts to create openings, a brief ten-minute spell just before the interval aside, when the Citizens left-back was given too much space and allowed to roam forwards unhindered.

Following a lengthy half-time interval, prolonged due to a Citizens player having to switch boots and then donning the keeper’s outfit in an unlikely turn of events, the second half proved a sterner test for the men in blue, with the visitors' midfield trio driving forwards and proving more than a match for their opponents. Again, however, the sound organisation and committed performances of the Harrow rearguard ensured that few chances of note were created.

But with the hosts also struggling to find their attacking rhythm, the early space that had been afforded to the wide players now denied, it was difficult to see where a goal would arrive from. The Blues did put together a superb move down the right wing midway through the half that ended with Taunton-Collins driving to the byline before cutting the ball back for Hutchinson on the edge of the box only for the shot to again lack the requisite accuracy. But it was to prove an isolated moment of excellence in an increasingly fraught encounter.

As time ticked on, tempers rose on both sides over a series of niggly challenges, referee Hitesh Jansari intervening on numerous occasions, although few decisions were left unchallenged by either side.

The frantic finale was almost inevitable as one late challenge too many from both sides saw a series of furious exchanges. In the immediate aftermath it was unclear exactly what had transpired, but when the dust finally settled it was the Blues left a man down, Max Curry sent to the sin bin for using foul language and only able to reappear for injury time.

Skipper Geoff Taunton-Collins had to think quickly and he reacted immediately to bring on substitute Jack Orr-Ewing in a bid to shore up the defence, Ward’s hamstring finally getting the better of him. Play had barely re-started when the replacement was forced into a tricky decision: allow a Citizens player to shoot or try to challenge for the ball. Orr-Ewing chose the latter, swung a boot but only connected with the opponent and the referee pointed to the spot. Given his excellent display in the centre of the pitch, it was a shock to everyone when the Citizens midfielder fired his penalty over the bar, the ball just skimming off the woodwork on its’ way past.

But any Harrovian thoughts of an escape evaporated moments later when an attack through the middle of the Harrow defence saw a neat through-ball bisect the centre-halves and find a forward in space, this time the player making no mistake as he bided his time before planting the ball beyond Walsh into the corner.

The hosts threw men forwards in the closing minutes in a desperate bid to preserve their unbeaten start to the season and they so nearly rescued the situation in the final moments when Lederman’s long free-kick from inside the Harrow half landed at the feet of Hutchinson inside the six yard box. This time the forward did everything right, poking the ball up and over the keeper only to see it drop inches wide of the post. And with that, the game was gone.

Understandably, the nature of the defeat only added to the sense of frustration felt on the sidelines after the game. Both sides had given their all and there was little to choose between them. But some words of encouragement from several players ensured that the 2s left with their heads held high and their minds firmly focussed on returning to winning ways at the earliest opportunity. The season is a long one and there is still everything to play for.