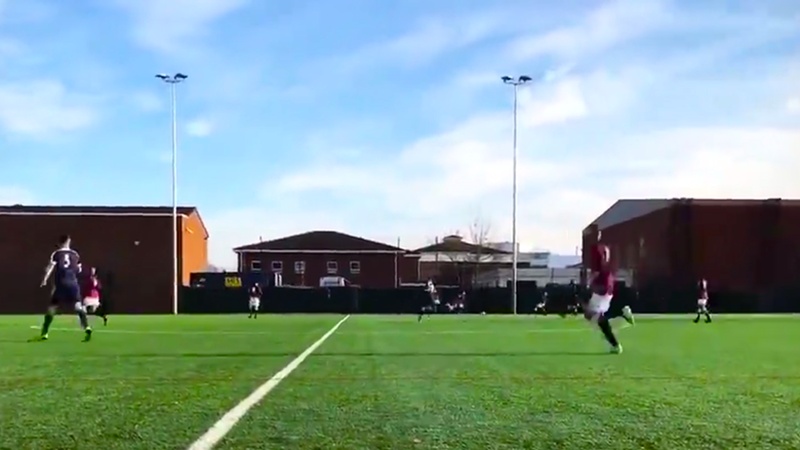 The topsy-turvy nature of the OHAFC 1st XI’s season continued apace on Saturday afternoon as the Blues recovered from losing a lead away to the struggling Old Tonbridgians in their previous fixture to post an encouraging 6-4 victory away to the high-flying Old Bradfieldians, this time coming back from conceding an early 2-0 deficit.

Strikers James Breeden, returning to action following a three-game absence, and James Tippett scored twice each, with Dan Firoozan and substitute Cyprian Owen Edmunds adding the others – Firoozan scoring for the third game in succession. Despite the excellent win, the Blues remain in seventh in the Premier Division table, although they have now opened up a healthy seven-point lead over the three sides below them and sit just two points below the third-placed Bradfieldians.

And once again, following last weekend’s red card for Owen Edmunds that handed the Tonbridgians a decisive advantage, the destination of the three points turned when one side lost players, the Bradfieldians being reduced to nine men for ten minutes either side of half-time, referee Fatmir Sherifi utilising the new sin bin laws to full effect to punish a couple of Bradfieldians for dissent.

Up until that point, the game had twisted and turned as much of Harrow’s season has to date. Playing on the slow astroturf pitch in Hampton, a surface they are more than used to, the Bradfieldians began the game in a fashion befitting a side that had just beaten the almost invincible Old Carthusians the week before. Despite some early Harrow possession it was skipper Fraser McGuinnes who was the first goalkeeper called into action, kicking away a low shot after Jamie Jordache had been caught out by a cross from the left.

But a moment later the hosts did find a way through, a long ball over the top saw Connor Barrett dive in on the striker and referee Sherifi awarded a free-kick, despite the defender appearing to get the ball first. The offence was superbly punished with a low effort curled around the wall and into the bottom corner, the power of the shot preventing McGuinness from palming the ball away, despite the keeper getting a good hand to it.

And the hosts doubled their lead after fifteen minutes when a cross was whipped in from the left and as Jordache dithered, the Bradfield striker nipped in to shoot, his effort ricocheting off the inside of McGuinness’ leg and into the net.

At this stage the visitors were under huge pressure, their run of five League games without a win looking likely to continue. But the Blues possess too much quality in attack to be kept quiet for long and they fought their way back into the match with two goals inside ten minutes, Dan Firoozan the catalyst for both of them. The diminutive trickster was fouled out on the right wing and Alex Breeden delivered a perfect curling cross into the box for his brother to plant a firm header into the top corner. Then, just before the half-hour mark, the visitors levelled courtesy of another superlative effort from Firoozan. Good build-up play down the right saw the midfielder fed just outside the box, he cut inside and delivered a perfect curling finish into the far top corner. Momentum was clearly now with the visitors, although they had to wait until five minutes before the break to take the lead with one of the more bizarre goals ever seen in an OHAFC match and one that the Bradfieldian keeper will want to forget in a hurry. Having caught a through-ball safely, he dropped to the turf to adjust his shin pads before picking up the ball again. Referee Sherifi was quick to spot the offence and awarded the indirect free-kick as the laws demand. Alex Breeden tapped it two yards sideways and James Breeden did the rest, slotting the ball into the far corner to earn Harrow’s first lead of the game.

But, in keeping with the rather porous nature of the side’s defending this season, the Blues couldn’t hold out until half-time, this time conceding from a free-kick. Bradfield worked the set-piece neatly, pulling the ball back to a midfielder on the edge of the box and his powerful low shot flew through a crowd of players and into the net.

This sparked off the main talking point of the match, with tempers rising on both sides and several of the home side taking their frustrations out on the referee who sent not one, but two Bradfieldians to the sin bin for taking their protestations too far. The upshot was that with the sides level at 3-3 at the break, the visitors would enjoy a two-man advantage for the first eight minutes of action of the second half.

Skipper McGuinnes delivered a clear message to his team at the break: raise the tempo, press the opposition high up the pitch and keep the width. Owen Edmunds came on for James Tippett, meaning James Breeden, who had up to this point been operating from wide areas, now playing as the main focal point of the attack.

The Blues just about took advantage of the pair of sin-bins, taking the lead shortly before the Bradfieldians were restored to their full complement of players. Cyprian Owen Edmunds made amends for his aberration last week with some excellent pressing to close down the flustered Bradfield keeper and force him into an error, the Harrow man almost tackling the ball into the net.

And when James Tippett scored his first of the afternoon after sixty-five minutes, applying the coup de grace after James Breeden had been sent clear by his brother only to see his effort parried by the keeper, it appeared as though the Blues would finally return to winning ways.

But the hosts had other ideas and the goals continued to fly in at both ends. Bradfield reduced the arrears to a single goal with a quarter of an hour remaining to set Harrow hearts fluttering, a cruel deflection off Kyle Barrett taking what had looked a routine shot for McGuinness to save beyond him and into the far corner.

Thankfully, this time there was to be no late capitulation and the Blues put the result to bed with just under ten minutes remaining when Tippett scored his second in almost identical fashion to his first, following up a James Breeden shot which the keeper had again saved, the two strikers combining well in the build-up.

The sense of relief among the squad at the full-time whistle was evident, the late dramas of recent weeks finally put behind them courtesy of this excellent win. In truth, it was a game that could have gone either way for long periods, but the Blues deserved their slice of luck on this occasion and showed, once again, that there is no reason they cannot compete with every side in the division going forwards.

The result also highlighted the continuing divergence between the relative strengths of the side at each end of the pitch, with the Blues having now scored 27goals in their ten matches, third most behind only the Bradfieldians and Alleynians, but having conceded 32, again second only to the Bradfeldians. It was little wonder, then, that the two sides should produce such a goal-laden game as this.

Next week sees the 1s face a tricky trip around the north circular to Fairlop Oak and the tight, bumpy pitches the Old Foresters call home. Forest have struggled as a club this season, until recently having sat rock bottom of the division. A couple of wins in their previous few games has seen them climb out of the bottom two, although they appear the absolute antithesis of the OHAFC, having scored only eight times this season and conceding only 17 – fewer than half the teams in the division.

Given the recent nature of OHAFC games, it would be somewhat foolhardy to attempt a prediction on the outcome.

*Thanks to Fraser McGuinness for his assistance with this report