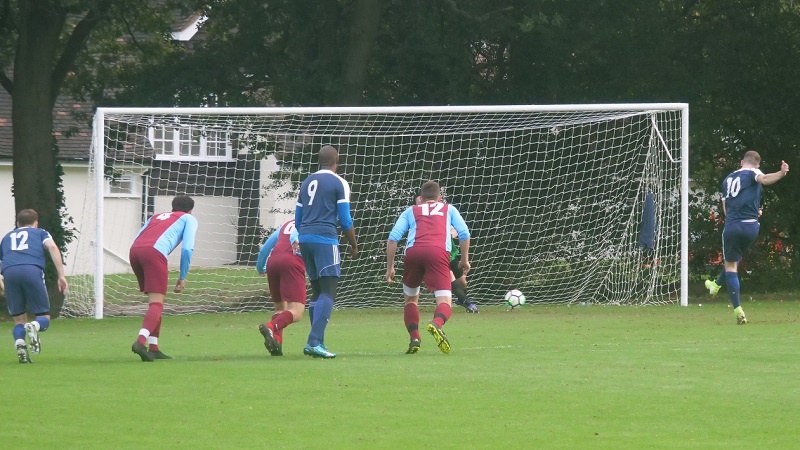 A James Breeden hat-trick, his first of the season, helped the OHAFC 1st XI maintain their excellent start to life back in the Premier Division as they thrashed bottom side the Old Chigwellians 5-1 in Essex on Saturday morning. The comfortable win sees Fraser McGuinness’s men climb a place to third in the table ahead of next weekend’s enticing Arthur Dunn Cup tie away to the Old Etonians.

With the club only required to field two teams on Saturday, the 1s were able to call up 3s regulars Kyle Barrett and Harry Bick for their first appearances of the season. Barrett slotted in at the back alongside Alex Breeden, meaning Jonny Lalude reverted to his previously natural role on the right and Cyprian Owen-Edmunds, also available given Spurs were playing away from home, on the left.

The midfield was a youthful one, with plenty of talent on show: Bick, on the left, and Firoozan the wide players, with George Gould, Chester Robinson and James Breeden, in a more advanced role, the ideal trio to make use of the pristine playing surface at the Old Chigwellians Club. Mike Okoigun was rewarded for his two-goal salvo from the bench last weekend with a start up front, meaning Jamie Jordache and Rollo Hovey on the bench.

Referee Adam Knight is one of the most experienced and trusted match officials in the League and, coincidentally, had taken charge of the OHAFC 2s at Aldenham the previous weekend, maintaining a solid grip throughout.

Chigwellians have made a poor start to the season, conceding 12 goals in their three defeats to the Salopians, Alleynians and Etonians, and their previous track record against the OHAFC suggested they would be in for another tough afternoon. The opening skirmishes did little to dissuade that notion, with the visitors looking the sharper from the off. Possession was switched across the back four confidently, the blue shirts making full use of the wide, flat surface.

Following several close calls for the Chigwell defence, the Blues made the breakthrough after a quarter of an hour with an excellent counter-attacking goal. The ball was played out to Dan Firoozan on the left and he drove into the box with purpose before slipping the ball down the line for James Breeden to run onto. The immediate danger looked to have been averted, but Harrow’s dangerman had other ideas, cutting back inside and firing the ball left-footed into the far bottom corner – another super strike to add to the collection.

The visitors maintained the pressure on their opponents, stifling any Chigwellian threat with relative ease, the new pairing of Barrett and Breeden coping well with any danger and goalkeeper McGuinness required to do little more than collect a few overhit through-balls.

Going forwards Harrow continued to probe down both flanks, Harry Bick well supported by left-back Owen-Edmunds and Firoozan and Lalude a perfectly-complimented pair on the right. Indeed, it was the left-back who proved to be the author of Harrow’s second goal on the half-hour. George Gould delivered the ball across the box from the right and the Chigwell defence was slow to react. Owen-Edmunds read the situation perfectly, collected the ball on the edge of the penalty area, drew the defender in and skipped past him. He was clearly fouled, the only question was whether or not it was inside or outside the box. Despite Chigwellians protests, referee Adam Knight pointed to the spot and James Breeden safely converted two attempts – the first ruled out for a number of players encroaching prior to the kick being taken.

The two-goal lead should have been the sign for the visitors to kick on and try to finish the game as a contest before the break. As it was, the opposite happened, with the Chigwellians enjoying their first spell of ascendency in the game. The visitors sat back, content to nurse their lead, but it proved a mistake, with the hosts testing McGuinness with a couple of efforts he proved equal to. The pressure increased, a series of set-pieces saw some dangerous deliveries into the Harrow box but the Blues defended them well. But the hosts finally broke through, albeit courtesy of a small slice of luck. A cross from the right just evaded the two Harrow centre-halves, Barrett stretched to block the shot but could only divert it over McGuinness and onto the top of the crossbar. The rebound fell perfectly for a forward to volley home into the roof of the net from close range.

Chigs smelt blood and pressed on, desperate to reach parity before the interval. This time a cross from the left bypassed the entire Harrow back four and picked out a waiting midfielder at the far post. His header back across goal was scrambled away by a combination of McGuinness and Barrett and somehow the visitors held on, the half-time whistle coming not a moment too soon.

The Harrow side drew breath at the interval and resolved to return to the high-tempo, pressing football that had served them so well in the first half an hour. And sure enough, barely five minutes of the second half had elapsed when an excellent move down the left saw James Breeden collect the ball out wide, cut inside on his favoured right foot and curl a powerful shot into the far corner, the Chigs goalkeeper failing to get anywhere near it.

This time the visitors made sure there was no let-up in their tempo and they slowly turned the screw. Mike Okoigun featured more prominently, holding the ball up well in advanced areas, and Robinson and Gould began turning the Chigwell defence with balls played inside the full-backs for Bick and Firoozan to run onto. And it was the two wide players who combined for Harrow’s fourth goal with twenty minutes remaining. Firoozan broke down the right and crossed low for the onrushing Bick. Although his effort was somewhat scuffed, the Chigs keeper was deceived and the ball crept inside the post to put the game beyond the home side’s reach.

There was still time for a fifth, scored by Alex Breeden, who smashed in at the far post following a goalmouth scramble at a corner. Just reward for a player who has enjoyed an excellent start at the back this season.

Rollo Hovey and Jamie Jordache were both introduced off the bench, ensuring their day hadn’t been a wasted one, and the visitors saw out the game comfortably, Chigwell’s early resistance having long since evaporated.

So another excellent win for the OHAFC 1st XI that sees them climb to third in the Premier Division table – the highest they have been since early in the 2012/13 season. Confidence is high and the side have shown they belong in the highest division in the League. But the squad will also know that tougher tests await, with the three games won all coming against sides currently occupying the bottom three places in the table.

And there can be no greater test than the one the side face next, with a trip down the M4 to face the Old Etonians in the first round of the Arthur Dunn Cup. Recent OHAFC forays into the Dunn have proved miserable, with not a single tie won since the 2015/16 season and just two quarter-final appearances since 2013. Saturday would be an excellent occasion to start making amends.