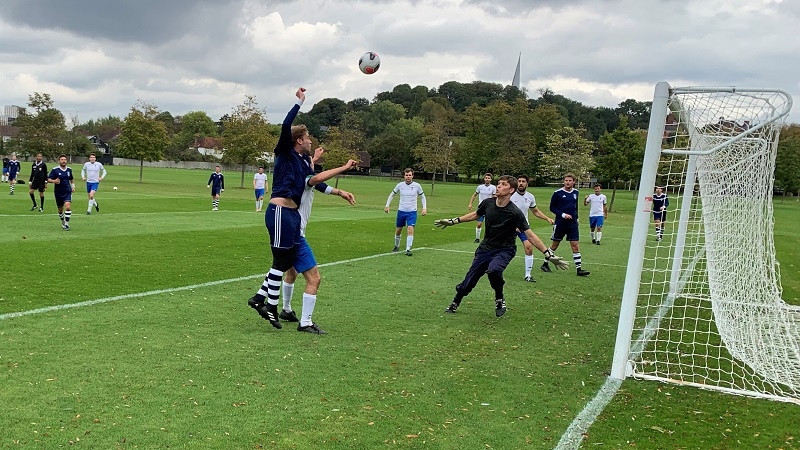 The OHAFC 2nd XI maintained their impressive start to the new season with a second consecutive 3-1 victory, this time defeating the newly promoted Old Rugbeians under cloudy skies on Harrow Hill – the win keeps the OHAFC top of Division Two with maximum points from three games.

Once again, early goals saw the Blues in command, leading 2-0 at the break courtesy of a Pablo Hutchinson header and a close-range finish from Alexi Pittalis. Rugbeians pulled a goal back on the hour after Harrow had missed two glorious opportunities to put the result beyond doubt. But an excellent move down the right was finished by substitute Gbeminiyi Soyinka and the hosts held onto their lead with minimal fuss.

With availability strong once more, skipper Geoff Taunton-Collins faced a selection headache for the first ever meeting between the two sides. Rugbeians had won promotion from Division Three last season, finishing second behind the Old Sennockians. Having defeated Old Merchant Taylors last weekend, there was little room for complacency among the Harrow ranks.

As it was, the skipper opted for continuity where possible, with all the available starters from last week’s win at Aldenham keeping their places. This meant an extremely strong subs bench including Ollie Curry, Jack Dolbey and record 2s scorer Gbeminiyi Soyinka. Max Curry returned to central midfield and Tom Mitchell made his 2s League debut in goal, regular keepers Kyri Pittalis and Charlie Walsh unavailable.

Phil pitch 1 looked in pristine condition and with little wind on the Hill, neither side had any excuse not to get the ball down and play at every opportunity. Referee Tony Anderson has become a familiar face in Harrow in recent months, once more bringing his chatty, friendly style to proceedings.

And for the third game in a row, the OHAFC made a bright start and secured an early lead. Having enjoyed the bulk of possession, the hosts' probing down the left-hand side bore fruit when Andres Hutchinson produced a superb cross to the far post where older brother Pablo outmuscled his marker to leap above him and head home from five yards out.

The next half-hour saw the Blues play some excellent football, switching play confidently across the pitch and deliver a number of dangerous crosses into the box. On the left, Tristan ‘Trizzer’ David was metronomic in his production, firing in hard, low crosses that caused plenty of headaches for the Rugbeians back four. On the right, Geoff Taunton-Collins powered forwards from his defensive position on several occasions, destroying his opponents with his searing pace. With the Hutchinson brothers continually buzzing around the edge of the box and a steady supply from midfield, there was plenty to suggest a second goal was in the making.

And on the half-hour the hosts duly delivered, with a lovely, composed move that produced a marvellous goal. The ball was worked out to the right before being switched back to the left. Lederman fed Tristan David down the wing, he drilled the ball low across the near post and Alexi Pittalis slid in to bundle the ball home for his third goal of the season – already one more than he managed in the whole of last season.

The Blues continued in the ascendency for the remainder of the half, although perhaps over-elaborated somewhat in the final third, the ball being lost too often when a simple pass backwards or wide would have prolonged an attack further. But with the Rugbeians producing little of note, the Harrow defence remained relatively untroubled. A number of corners were well defended and goalkeeper Tom Mitchell, playing his first game of the season, read several through-balls well, coming out of his box to clear long downfield and alleviate the pressure.

Half-time saw skipper Taunton-Collins bring on both Ollie Curry and Gbeminiyi Soyinka, and the two substitutes found themselves immediately in the thick of the action. Barely two minutes had elapsed after the break when Alexi Pittalis fed Soyinka down the right, he unselfishly squared across the box only for Andres Hutchinson to somehow fluff his lines, cushioning the ball into the keeper’s arms with the goal at his mercy.

Moments later, Ollie Curry played the ball over the top for Soyinka to run onto, again down the inside right channel. The first touch was perfect, carrying the striker careering towards the box. But having steadied himself to apply the finish, Bem unexpectedly screwed his shot wide of the far post, his teammates waiting for the net to bulge.

Disappointingly, these two passages of play were among the highlights of the second half for the hosts, with their passing and movement off the ball dropping off significantly. The game became somewhat scrappy, with Rugbeians competing on equal terms without ever suggesting they could find a way back into the contest.

But with half an hour remaining they did just that. Some careless play in midfield saw the ball fed over the top of the Harrow back four. Ward had pushed forwards, Taunton-Collins stayed back and Woolley was left in no-man’s land. Appeals for offside were dismissed and the Rugby striker ran through to delicately chip Mitchell inside his near post, the goalkeeper also caught in an awkward spot.

The visitors clearly thought the goal could launch an unlikely comeback, but within ten minutes the hosts had scored an excellent third to regain their two-goal advantage and put the result beyond doubt. A Rugbeians attack was snuffed out and Ollie Curry broke at pace down the right wing. He fed Lederman, who cleverly drew a defender across before back-heeling the ball back into his teammate’s path. Curry fed the scampering Taunton-Collins outside him, the skipper delivered a precise low cross, Andres Hutchinson flicked on and this time there was no mistake from Soyinka, taking one touch to control before finishing from close range.

Briefly, Harrow’s mojo returned, with Tristan David back on the pitch providing width down the left and Taunton-Collins producing several lung-busting sorties down the right. The quality of both players’ deliveries throughout the game was superb, with nearly every cross searching out attackers inside the box.

But with a comfortable lead and little threat to their supremacy, the final quarter of an hour proved something of a damp squib with neither side looking likely to further add to their tallies.

Another decent win for the 2s then, with yet another fast start proving highly profitable. The side have now scored twelve goals in their three games (or four per game as Soyinka helpfully pointed out in the dressing room afterwards). But next week sees the team on the road for their third away fixture of the season and a trip to old foes the Old Etonians. With the respective 1st XIs involved in a Dunn Cup tie later in the afternoon, also at Eton College, there can be no question that next Saturday is the most important date of the season so far for the OHAFC.