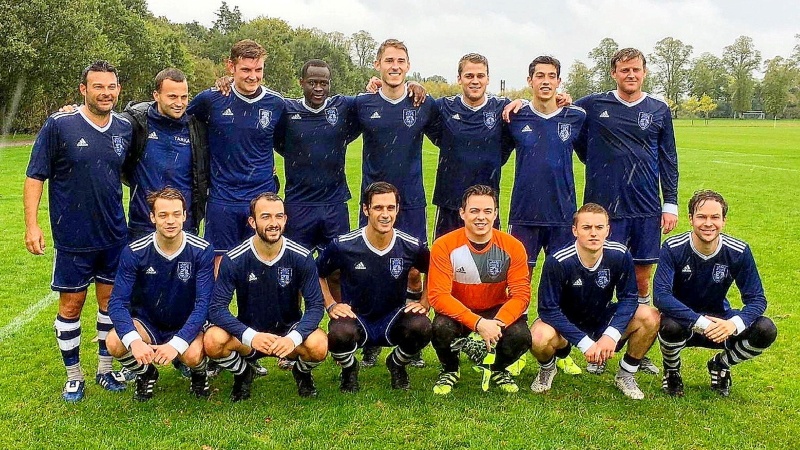 The OHAFC 2nd XI maintained their superb start to the season with a vital, hard-fought 2-1 win away to their Old Etonians counterparts on Saturday morning, maintaining their 100% League record and tightening their grip at the top of Division Two. As has been the case in each of the four wins to date, the Blues established an early lead and held on under considerable pressure in the second half. Geoff Taunton-Collins’ side remain three points clear of the chasing pack, although only the Old Citizens have yet to lose a game this season.

Trips to Eton are notoriously tricky affairs and this was no exception. With the respective 1st XIs meeting in the Dunn Cup at midday and referee Adam Knight officiating both fixtures, the 2s game was brought forwards to an unsociably early 10am – the joint-earliest OHAFC kick-off in living memory (the 2s also kicked off against Lancing at 10am in November 2010).

Persistent rain had fallen overnight and meant that when curtains were pulled back on the morning of the game, in some cases at 7.30am, it was a grizzly sight indeed that greeted the squad of 13 that were preparing to travel down the M4. Pablo Hutchinson missed his first game of the season, meaning a first start up front for record goalscorer Gbeminiyi Soyinka – having informed the squad on Friday night that ‘goals are my currency’ there was a certain amount of pressure on him to make a substantial withdrawal. There was also some debate about who should start in midfield, with Alexi Pitallis, David Lederman and the two Curry brothers all vying for the three available spots. As it was, Max Curry was the unlucky one to start on the side, joined by Jack Orr-Ewing and the injured Jack Dolbey – who had suffered some sort of shoe malfunction whilst on a date in midweek. This rather odd explanation immediately saw Dolbey go straight in at number 18 in the 100 Best OHAFC Excuses list (Gerry Rea still holds the top spot with his infamous ‘filing accident’ effort from the mid 90’s).

It was also an early start for referee Adam Knight, who, he informed several of the Harrow side, had been up at 7am to walk the dogs and make the kids their breakfast, before travelling south from St Albans. No wonder the Arthurian League is considering starting a hardship fund for their over-worked, under-appreciated match officials.

The Etonians had made a reasonable start to their season, with two wins and two defeats from four games played, and an even ten goals scored and conceded in those games. As usual, they appeared a physically strong side, with their now-standard set of six foot-plus centre-halves and powerful midfielders. Their skipper, too, seemed an interesting individual, a spiky, aggressive forward, highly reminiscent of Jamie Vardy and with a mouth to match, too – within five minutes of the game starting, he had left a boot in on Harrow ‘keeper Charlie Walsh and bemoaned several decisions from referee Knight.

The opening skirmishes were, as could be expected, highly competitive with few signs of real quality from either side. Eton switched the play well from both wings but struggled to beat the Harrow back four with their final ball. Harrow also struggled to create much going forwards, wide players Andres Hutchinson and Tristan ‘Trizza’ David looking lively without managing to forge an opening.

With neither goalkeeper having been tested, it was indeed a moment of magic from Andres Hutchinson after ten minutes that provided the spark the visitors needed to open the scoring. Collecting the ball just inside the Eton half on the left, the youngster drove at the retreating defence with pace and purpose. Cutting inside, Hutchinson beat three or four players before slipping the ball to Ollie Curry just outside the box. He took a touch before playing in Soyinka down the inside right channel and the striker made no mistake, beating the keeper with a calm, low finish. 1-0 and money in the bank for Bem as he continues on his quest to reach 100 goals for the club since the 2009/10 season.

The goal did little to alter the balance of play, with the hosts continuing to look the more assured team in possession, but Harrow still holding firm at the back. Walsh showed excellent judgement to tip a long-range effort over the bar, rather than risk the ball slipping through his fingers with an attempted catch. Ward and Woolley held the line perfectly at the back, with full-backs Taunton-Collins and Monroe working tirelessly to limit Etonian supply from wide areas.

And Walsh’s consistently excellent handling in the Harrow goal was thrown into sharp focus after twenty minutes when a blunder by his opposite man gifted the visitors their second goal. Lederman collected the ball in the centre of the pitch and in two touches fired a diagonal across the pitch for Tristan David to chase. The Eton keeper raced off his line to collect but spilled the ball on the edge of his box. David collected, waited for support, before teeing up Ollie Curry and he coolly planted his shot in at the near post past a couple of retreating Etonian defenders, the keeper still well out of position.

Still the scoreline failed to change the pattern of the game, with the visitors forced to defend numerous crossfield passes as Eton pressed to recover. Walsh continued to excel in goal, making a superb, one-handed diving stop at his near post to parry a forceful shot up and over the bar. But he was finally beaten ten minutes from the break by a quite magnificent header. An Eton corner was swung to the far post and the tall defender rose superbly, despite falling away from goal, to somehow impart sufficient power and accuracy on the ball to send it looping back across and over the Harrow goalkeeper and into the back of the net.

The visitors were glad to reach the break without further alarm, although the pre-match predictions that this fixture would prove the trickiest of the four so far were clearly accurate. No changes were made, with Lederman having already made way for Max Curry and Jack Orr-Ewing ready to come on if defensive changes were required.

The second half began as the first had ended with the hosts ramping up the pressure on the visitors’ goal. Harrow continued to defend tirelessly, Woolley almost permanently sliding around to cut out through-balls, Ward winning challenges in the air and on the ground with authority. There was one huge, self-inflicted scare when the back four tried to be a little too cute playing out from the back and possession was gifted to the Etonians on the edge of the box, but the low cross that resulted somehow evaded the onrushing forwards and the visitors escaped.

And this was to prove the story for much of the half with the visitors managing to repel everything thrown at them, mainly through discipline and determination, but with a little luck thrown in for good measure. Walsh continued to make light of the dreadful conditions, displaying excellent handling and decision-making. Orr-Ewing replaced the tiring Woolley at the heart of the defence and, along with the rest of the back four, continued to prove a stern barrier to the opposition. With every Eton shot that flew into the trees behind the goal, a little hope drained from the hosts and the clock ticked ever closer towards the ninety-minute mark.

The visitors rarely threatened going forwards, the side unable to keep the ball for long enough as limbs tired and minds grew weary. But the prize of three points was in sight and nothing could deter the men in navy from achieving their target. One last attack was repelled, the Etonians desperately asking for further time to be added by referee Knight, but the final whistle blew and another excellent win had been secured.

This was comfortably the toughest match the OHAFC had played so far this season and the win should imbue the side with further confidence going forwards – although it must also be recognised that all four sides beaten now sit in the bottom half of the division. Nevertheless, this strong squad of players are flying and appear to have found that magic footballing formula – tough to beat at the back and clinical in front of goal – a recipe that sees the 2s become the first OHAFC side in over ten years to win their first four League games at the start of a season.

The team now enjoy their first Cup match of the season with a first-ever fixture against AFC side the Old Minchendenians in the Old Boys Cup. Last season the 2s lost in extra-time to eventual winners the Old Parkonians at the quarter-final stage – on current form they will be aiming to go further than that.