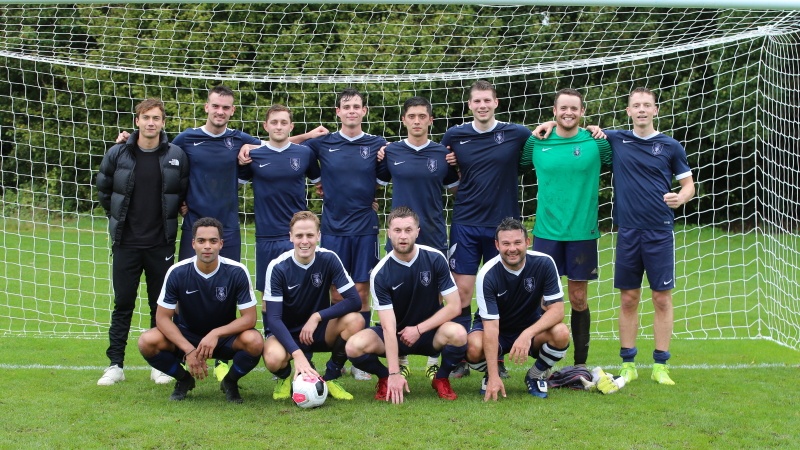 The OHAFC 1st XI produced one of their finest displays in several seasons to beat the Old Etonians 3-0 in the first round of the Arthur Dunn Cup at a rain-swept Eton College on Saturday afternoon. First-half goals from James Breeden and James Tippett earned the visitors a 2-0 lead but they had to hold on under constant Eton pressure in the second half. Thankfully, another excellent finish from Breeden saw the Blues score a vital third goal with ten minutes remaining to end any hope of a comeback. The OHAFC will now host the winners of the Old KCS Wimbledon versus Old Aldenhamians tie in round two.

With availability for this historic fixture – the two sides have not met in the Dunn Cup for well over a decade – disappointingly inconsistent from the Harrow 1st XI squad, vice-captain Alex Breeden endured a torrid week attempting to fine-tune his side. Skipper Fraser McGuinness, defenders Jonny Lalude and Hamish McIntyre, midfielder Dan Firoozan and striker Mike Okoigun were all unavailable, with George Gould a further doubt with a knee injury. Regular 3rd XI keeper Tom Mitchell was drafted in between the posts, with Ed Beecham making his first start for the seniors following a substitute appearance at the start of the season. Ed formed part of one of the youngest back fours ever fielded by the 1s, with Jamie Jordache and Henry Charatan joining Beecham in making their Dunn Cup debuts alongside the skipper. Doug Morrison joined Chester Robinson and Jack Hill in midfield, with a potent attacking trio of James Tippett, James Breeden and Will Bamford. George Gould’s late declaration that he would be unable to travel meant that, astonishingly, the side would have to call on some of the 2s players who had already played that morning as substitutes in an emergency.

Despite the heavy rain that continued to fall throughout what had been a miserable day in Berkshire, conditions for the tie were decent enough. The main pitch at Eton, intriguingly named ‘Mesopotamia’, was in excellent condition for the first ever visit of an OHAFC side to play on it. With little wind, there was little excuse for either side not to get the ball down and play.

The opening exchanges were hotly contested, with both sides looking more confident going forwards than at the back. Eton possessed a quick, physically powerful forward line, but the Harrow front three, along with Doug Morrison, looked lively and capable of causing their own problems.

Tom Mitchell looked secure at the back for the visitors in what was comfortably his most challenging OHAFC experience to date, but he judged any Eton through-balls soundly and his kicking, as ever with his trusty left foot, was solid. There was one moment of panic when a mis-controlled pass by the Harrow keeper nearly allowed the Etonians in, five seconds of sheer terror followed by almost audible sighs of relief from the players on the pitch to those of a Harrow persuasion watching on the touchline as the ball was scrambled clear.

But it was the home crowd that had reason to freeze shortly afterwards as the visitors stormed upfield to score an excellent opener. The ball was worked through midfield and played out to Will Bamford on the right. The Eton left-back hesitated momentarily and Bamford took full advantage, sprinting past his man on the outside before delivering a low, hard cross to the far post. James Breeden was a yard too late, but Tippett was not, collecting the ball under pressure before turning to fire high into the roof of the net from six yards out.

Eton responded with a series of attacks but the Harrow back four coped well, a couple of unnecessary free-kicks aside. Mitchell remained equal to anything thrown at him in goal, although in truth there was plenty of huff and puff from the home side but little in the way of genuine quality. Shots and crosses flew high and wide and rarely hit their intended target.

And the visitors made them pay for their slackness in front of goal with a harsh lesson in the basics of finishing. Again the attack emanated from the right wing, again Bamford was the instigator, driving forwards towards the Eton box before slipping the ball wide to James Breeden. Harrow’s leading marksman took a touch before drilling the ball from the most acute of angles like an arrow, the ball crashing into the far post before nestling in the back of the net to spark scenes of jubilation from his teammates.

Harrow were in dreamland, 2-0 to the good in a game that their opponents were expecting to comfortably win. It wasn’t all good news however, as five minutes before the break Jack Hill went down with what appeared a serious injury. Several minutes delay followed after which the midfielder hobbled off, his previously-torn Achilles again the cause of pain. With half the Harrow 2s present on the side but several of them incapable of playing again, it was left to 45 year-old David Lederman, who had already played 70 minutes in the 2s' win, to step forward and take Hill’s role in the middle of midfield. An unexpected turn of events for sure, the veteran having presumed his Dunn Cup days long since over. Still, the Blues held on to their lead until half-time, giving them the chance to regroup ahead of what promised to be a testing second half.

And so it proved, with the hosts in charge almost from the first whistle. The Harrow defence remained under constant pressure with the front trio unable to maintain possession for very long. Fortunately, the inexperienced back four and goalkeeper Tom Mitchell continued to perform superbly, with numerous blocks, tackles and saves all helping keep Eton at bay. Robinson and Lederman provided a shield in front of the defence, with Morrison and Bamford also tucking in to help out their full-backs.

Despite the disciplined shape and defensive excellence from the visitors, the Etonians should have scored on several occasions. Mitchell produced a superb diving save to palm a shot onto the post and away to safety. Minutes later, a low cross was fired in from the Eton right wing but somehow scooped over the bar from the penalty spot when it seemed easier to score. The biggest escape of all saw an Etonian given a free shot at goal from ten yards out but the ball was somehow prevented from crossing the line by a combination of the Harrow goalkeeper, several defenders and a large slice of luck.

As is so often the case when a side dominates but fails to score, the Etonians were then punished for their profligacy at the other end. Harrow had enjoyed a slightly brighter spell of play, with Tippett looking lively down the left and Bamford still causing problems down the right. And again a ball down the right wing proved troublesome for the Eton back four. James Breeden looked to have too much to do but he managed to work himself sufficient space to drive another superb low effort inside the far post to send the Harrow supporters wild with delight.

That third goal undoubtedly broke Etonian spirits, for the final ten minutes the hosts attacked with hope rather than expectation. The Harrow rearguard, superbly marshalled by Alex Breeden and Ed Beecham, continued to force the Etonians into speculative long-range efforts, most of which missed the target by some distance. Jamie Jordache was unlucky to receive the only yellow card of the game for what looked nothing more than an accidental collision, but there were no further alarms and the hosts finished the game well beaten.

So a fantastic win for the OHAFC, who now face either the Old Aldenhamians or KCS Wimbledon at home in round two. Somewhat amazingly, Harrow are now the fourth highest ranked side left in the competition, with only the Old Alleynians, Carthusians and Wimbledon ahead of them in the Premier Division table.

Congratulations to the twelve players used for a superb effort in tricky circumstances, with a special mention to the youngsters making their Dunn Cup debuts at the back – Mitchell, Jordache, Charatan and Beecham were superb and should provide plenty of competition for places as the season progresses.

*All photos (except of the injured Jack Hill) taken by photographer Andy Nunn - available on flickr or twitter - andy the photgrapher - many thanks Andy!