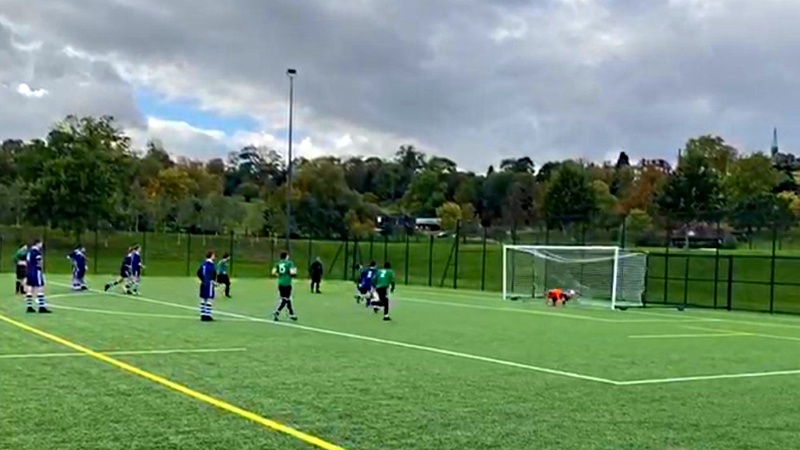 The OHAFC 2nd XI suffered their first defeat of the season in frustrating fashion on Saturday afternoon, conceding an 88th minute goal to the Old Minchendenians on the Harrow School astroturf. The goal gifted the visitors a 4-3 win in the first round of the Junior Old Boys Cup, ending the Blues’ hopes of silverware in the competition.

It was a cruel conclusion to a game in which the hosts had competed on equal terms for long spells, despite the absence of a recognised goalkeeper. With regulars Kyri Pittalis and Charlie Walsh unavailable, 3s keeper Tom Mitchell, who excelled in goal for the 1s in their Dunn Cup win over the Old Etonians the week before, was due to play before being forced to pull out late on Friday night due to work commitments. With no other goalie available, skipper Geoff Taunton-Collins was forced to ask defender Ed Massey to don the gloves. Ed performed excellently, making a superb save moments prior to the mistake that led to the late Minchendenians winner.

With four League wins from four safely in the bag, the OHAFC 2s went into Saturday’s game sitting pretty at the top of Division Two and free from the usual pressures that accompany an Arthurian League fixture. Despite everyone arriving at the Sports Hall on time, the Phil pitches unusable due to recent heavy rain, there was a more relaxed atmosphere around the warm-up, a fact not lost on midfielder Ed Beecham, who provided a forceful pre-match rallying cry whilst the two captains met in the middle.

But the words appeared to fall on deaf ears as the hosts produced a dozy first twenty minutes. Minchendenians, who play in the Amateur Football Combination and about whom little was known in advance of kick-off, looked a mess sartorially, their kit having failed to arrive on time and forcing them to wear a selection of bibs for the first half-hour. But their play was in sharp contrast, as they zipped the ball about on the pristine artificial surface. Their pattern of play was a simple one: several short passes around the midfield to draw the Blue shirts onto them before firing the ball long over the top for their forwards to chase. The left winger in particular looked menacing early on, giving Taunton-Collins plenty of work on the right.

Harrow hadn’t really got going and although there was a touch of fortune about the opening goal, it was little surprise that it was the visitors that scored it. A long throw appeared to have been cleared but the ball ricocheted back perfectly into the path of a loitering forward who made no mistake, firing past a helpless Massey with the defence appealing in vain for offside.

The visitors kept up the pressure with a series of corners, most of which were well dealt with by the stand-in keeper, although early shouts from the men in bibs of ‘put it right on top of him’ were not encouraging. Massey was also forced into a couple of saves on the ground and displayed decent handling to prevent the concession of a second.

In fact, it was the hosts who levelled on the half-hour with pretty much their first confident sortie forwards. An attack was broken up and the ball played out to Tristan David on the left. He appeared to have little option other than to go alone, with no teammate within thirty yards. But instead, he looked up and fired a magnificent cross-field pass fifty yards into the path of Pablo Hutchinson, who had stormed forwards down the inside-right channel. There was still plenty of work for the striker to do, but his two touches were perfect: the first killed the ball dead, the second saw it calmly dispatched into the far corner.

The goal changed the complexion of the half and it was now the hosts that looked the more threatening. David down the left and Andres Hutchinson down the right began to find more space and the Minchendenians back four started to look highly vulnerable. In the middle, Pablo Hutchinson, buoyed by his excellent goal, made a nuisance of himself, hassling and harrying the visitors defence at every opportunity.

Both sides managed to see out the remainder of the half without further alarm, winger Will Payne getting his first taste of OHAFC action this season when he was introduced for Pablo Hutchinson, the forward suffering a heavy collision with the Minchendenians goalkeeper following an excellent Harrow attack. Fortunately, ‘Pabs’ suffered no serious damage and was able to return to the game later in the second half.

But it was the visitors who started better following the break and two goals in the space of ten minutes early in the half appeared to have sealed their passage into the next round. Both goals were avoidable from a Harrovian perspective. First, a through-ball caused momentary hesitation between keeper and back four with the result that when Massey eventually decided to challenge, he only managed to connect with the boot of the Minchendenian forward. Referee Sachin Patel, who was excellent throughout, pointed to the spot and Harrow’s keeper was sent the wrong way. Soon afterwards, a corner was sent flying high into the Harrow net via a thumping header from their tall centre-half – Jack Orr-Ewing did his best to put his man off, but the defender proved too powerful and the header was a fine one.

At this stage a first defeat of the season appeared a near-certainty for the men in blue, but to their credit the hosts rallied and clawed their way back into the game almost immediately with a clear penalty of their own. A decent spell of possession led to the ball being delivered into Will Payne just inside the box on the left. As he readied himself to control the ball on his chest he was rather unceremoniously barged in the back and sent sprawling to the turf, referee Patel again blowing instantly for the foul. Lederman stepped up and fired his penalty confidently into the top corner.

Belief returned to Harrow ranks and ten minutes later the hosts scored an excellent equaliser. More fine build-up play through the middle saw Andres Hutchinson found in space out wide. He drove into the box from the right, dropped the ball off to Payne, who repaid the compliment with a delightful first-time chipped return and the winger ran on, ignoring shouts for a cut-back from several teammates, to flick the ball with the outside of his foot over the keeper from a narrow angle.

The visitors were furious at the loss of their lead and began to turn on each other, further fuelling Harrovian belief that the game was theirs for the taking. And it should have been as for the next ten minutes the home side dominated. Several excellent chances were created, the attacking trident of Payne, Hutchinson and David causing all sorts of problems with their pace and direct running. The Blues were foiled by a combination of decent shot-stopping from the Minchendenians keeper and some wayward finishing – hardly a surprise given the appalling nature of some of the shooting seen during the warm-up.

With time running down it appeared as though extra-time would be needed to separate the sides. And that looked even likelier when the scorer of the visitors’ excellent headed goal was brilliantly denied a second with five minutes remaining, Massey leaping into the air to palm over another powerful header to keep the sides level.

But moments later all that good work went to waste when a hopeful long ball into the Harrow box was misjudged, Massey finding himself stranded as the ball bounced over his head allowing the left winger to nip in and bundle the ball over the line under pressure from Jack Orr-Ewing.

It was a cruel ending to the game for the hosts, and especially for the ever-reliable Massey, who had again pulled off a couple of excellent saves in the second half to keep the Blues in touch with their opponents. The Minchendenians were certainly not a poor side, possessing several excellent players, and they were a well-drilled unit with a clearly-defined pattern of play. Nevertheless, the sense of frustration at the final whistle betrayed the feeling that with a proper goalkeeper available and a sharper start to the match, the hosts could have gone on to win comfortably.

The 2s now return to League action and yet another fixture against a side in the bottom half of the table, the Old Merchant Taylors. With excellent availability and the first defeat of the season fresh in the mind, there should be no shortage of motivation to return to winning ways immediately.