Blues snatch a point from the jaws of victory 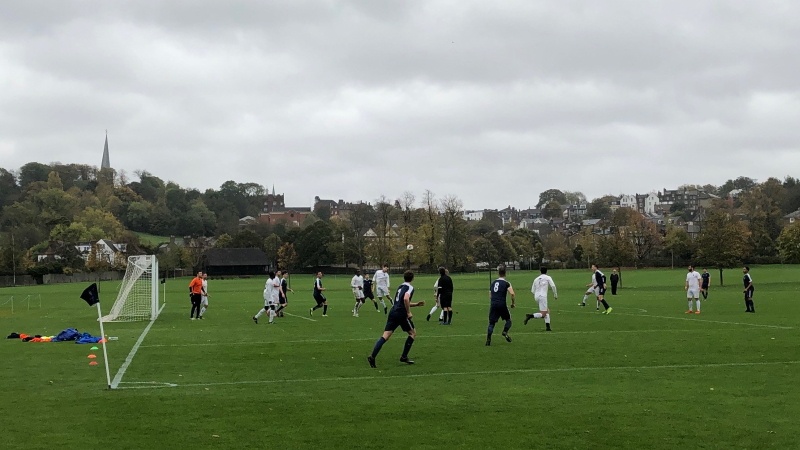 A disastrous final quarter of an hour saw the OHAFC 1st XI throw away a three-goal lead at home to the Old Alleynians on Saturday afternoon, ending the game furious with themselves for only managing a 5-5 draw against opponents whom had thrashed them 7-0 earlier in the season.

A James Breeden hat-trick, including two successful penalties, and further goals from George Gould and James Tippett appeared to have earned the Blues a vital win that would have lifted them into second in the Premier Division, just a point behind leaders Charterhouse. But some sloppy defending in the closing stages gave the visitors the chance to claw their way back into the game, the equaliser in the last minute greeted with screams of delight that could be heard across the Philathletic Ground.

It’s the second weekend running the Harrow 1st XI have played well and come away with very little to show for their efforts against another of the top sides in the League. Last Saturday a similar story unfolded down at Chaterhouse when the side more than matched their opponents only to lose 3-1 courtesy of a defensive howler, missed penalty and further missed chances.

There was no problem scoring goals this time around, the lethal Harrow attack combining to score five times against a side that had conceded only eight times in their previous five matches. But clearly there are still issues defensively, a fact most clearly demonstrated by the 1s need to play Alex Gilbert at centre-half for the visit of the Alleynians – a position he had never previously played before. Gilbert performed creditably enough, but the lack of a solid, consistent centre-half pairing is continuing to hurt the side on a weekly basis.

Saturday’s crunch clash was played in appalling conditions for the most part, with a strong wind blowing towards the Alcock Pavilion and driving rain falling for much of the afternoon. Fortunately for the few hardy spectators in attendance, a steady stream of goals kept them entertained, leading to the dramatic, unexpected conclusion.

The hosts started brightly and opened the scoring when James Breeden scuffed the ball over the line following an excellent driving run from the returning George Gould. Alleynians responded with a well-placed shot into the bottom corner and it became clear that there would be little to separate the two sides for much of the afternoon.

This was borne out when the sides against traded goals prior to the break: the Blues restored their advantage from the spot, winning and then successfully converting the penalty following a mazy dribble inside the box; Alleynians levelled courtesy of a fine through-ball that split the Harrow centre-halves and exposing McGuinness to a one-on-one that he was unable to save.

With only Jack Hill on the bench, still not fully recovered from the Achilles injury suffered against the Etonians in the Dunn Cup a few weeks ago, no changes were made at the break, Alleynians keeping their starting eleven on the pitch also.

But it was the hosts who slipped through the gears, driven on in midfield by the outstanding George Gould and Chester Robinson. The third arrived ten minutes after the break and was another gift from the visitors, a defender pushing James Breeden in the back to concede Harrow’s fourth penalty in two games. The striker took this latest opportunity to complete his hat-trick and once more put Harrow in the ascendency.

This time there would be no reply from the visitors. With the back four of Alex Breeden, Gilbert, Jamie Jordache and Henry Charatan coping well with the Alleynians’ threat, it was left to the attacking players to seemingly put the result beyond their reach. James Breeden turned provider with a mazy dribble into the box to tee up James Tippett, although the youngster still had plenty to do, cutting inside past two defenders before slamming the ball in with his left foot. And the fifth arrived with a quarter of an hour remaining, Firoozan initiating the move inside the Harrow half, beating his man before playing in James Breeden down the line, the striker crossing for Gould to lash home.

Harrow had the points in the bag with just over ten minutes left to see out. Amazingly, they couldn’t manage it. Alleynians pulled one back almost immediately, the ball being bundled over the line following a corner that really should have been cleared.

Time ticked on into the final seven minutes. Hopes of a comeback receded but a fourth for the visitors provided hope where previously there was none. A ball down the inside right left channel split the Harrow back four and was well finished past the outstretched arm of McGuinness.

And then the final crushing blow of the equaliser in stoppage time, the Alleynians striker dummying several times to shoot before planting his effort into the bottom corner, sending his teammates wild with delight. The contrast with Harrow faces was stark – for the second consecutive week an excellent performance against one of the leading sides in the division had earned scant reward.

The side must, if they can, take the positives from the performance once more. The team have now shown they can compete with all the top sides in the division and with every side having dropped points, the chance of a successful season in both League and Cup still remains.

Perhaps fortunately, the 1s now enjoy a week off and can watch the Rugby World Cup final in peace before returning to action in a fortnight with the visit of the Old Salopians to the Hill. Hopefully, this will prove a less taxing affair for the men in blue.

*Thanks to Dan Firoozan for his assistance with this report