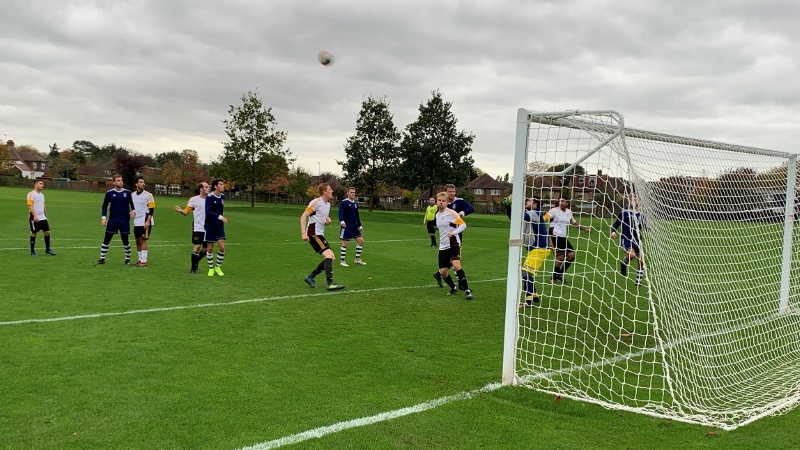 The OHAFC 2s go marching on. In appalling conditions on Harrow Hill on Saturday afternoon, the OHAFC second string recorded their fifth straight League win, comfortably beating Old Merchant Taylors 4-2 to regain their place atop Division Two. Early goals from Pablo Hutchinson and Max Curry established a lead, and despite Taylors scoring two rather fortunate goals of their own, a second from Hutchinson and a wonderful team effort shortly after the break ensured the points stayed on the Hill.

The forecast wind and rain duly arrived on the Hill, but the squad of fourteen arrived for Saturday’s encounter buoyed by England’s triumphant Rugby World Cup victory over the All Blacks. Charlie Walsh returned in goal following last week’s unsuccessful experiment with Edmund Massey, but otherwise the team picked itself – the only deviation from the norm seeing Alexi Pittalis partner Harry Woolley at the back, Tom Ward missing his first game of the season.

An intense warm-up preceded stern words of warning from skipper Geoff Taunton-Collins, concerned at the rather lax approach to the previous fixture against the Old Minchendenians. Although Taylors sat rock bottom of the division, they had narrowly lost to several of the top sides in the division and had provided ample evidence of their abilities with two strong displays against the Blues in last season’s league fixtures, winning at home and unfortunate to lose 2-1 at Harrow.

But as it turned out, the visitors failed to reach the heights of either of those two performances, producing a display as grey as the overhead skies in the first hour of the game. The hosts were in the ascendency from the start, keen to stick to what has proved a consistent recipe for success this season: forging an early lead before resolutely holding on to snuff out any thought of an opposition comeback.

Less than ten minutes had elapsed on the clock, and the hosts had already missed a golden opportunity to open the scoring when Andy Hutchinson tamely shot straight at the keeper when played clean through on goal, when another sweeping move down left saw Tristan David produce a wonderful low cross to the near post where Pablo Hutchinson arrived to turn in from close range. The two Hutchinson brothers proved a nightmare for the visitors’ defence throughout, Andres regularly collecting the ball in midfield and driving forwards, Pablo providing intelligent movement down the channels and, at times, bullying the Taylors back four.

The hosts continued to press forwards, at times trying to force things perhaps just a bit too much, before a stellar intervention from Max Curry midway through the half doubled the lead and produced a more accurate reflection of the balance of play in the scoreline. Lederman pumped the ball forwards towards the left edge of the Taylors box, it was partially headed clear, but fell invitingly to the former striker, who almost casually swung his left boot at it, caressing it perfectly across goal and into the far bottom corner. Surely an early contender for the 2s Goal of the Season award.

Conditions worsened and the driving rain seemed to affect the home side more, their play becoming rather staccato as possession was frittered away in the driving wind and rain. Despite this, keeper Charlie Walsh remained untested in the Harrow goal, as cold and isolated as the handful of spectators and substitutes on the touchline. Taylors had barely threatened a shot in anger but with just over half an hour gone they halved the deficit and introduced a modicum of tension into proceedings. A long ball forwards from midfield held up in the wind on the edge of the Harrow box. Walsh decided to come for it but realised he wouldn’t get there. Pittalis headed clear but the ball fell to a Taylors midfielder five yards outside the box and he produced a delightful first-time finish, clipping the ball over the stranded Walsh’s head and into the vacant Harrow net.

Fortunately, the hosts responded almost immediately, restoring their two-goal advantage in swift fashion when Ollie Curry delivered a perfect free-kick towards the penalty spot and Pablo Hutchinson again timed his run to perfection, deftly flicking it behind him and past the keeper.

But, surprisingly, the hosts managed to concede a second before the break, unable to put the visitors out of their misery despite the one-sided nature of the game. This time a lack of communication proved Harrow’s downfall as a low cross was whipped in from the right, Woolley stretched to intercept but only succeeded in sending the ball flying into the top corner, Walsh remaining static. A simple shout from keeper or fellow defender to leave it would have seen the ball run across goal to safety, no Taylors forward within striking distance, but none came.

Half-time was a short-lived affair, the miserable conditions ensuring neither side wished to remain exposed for too long. Perhaps the most prescient statement from the Harrow camp being that a failure to ensure three points in the following forty-five minutes would result in crushing disappointment for the squad – something nobody wanted. Ed Massey was brought on at left-back for Will Monroe, Ed Beecham having already replaced Lederman in midfield.

And for the first ten minutes of the half, the hosts proved they had no intention of letting the lead slip through their fingers as they produced their most authoritative play of the match. Camped in the Taylors half, the Blues played some lovely football, culminating in a superbly worked goal for the substitute Beecham. A short throw was collected by Andres Hutchinson and following a sharp interchange of passes with Ollie Curry and Tristan David, the latter was set free down the left. Another pinpoint cross was delivered into the box and Beecham read it perfectly, sliding in to volley home at the near post.

The goal should have been the invitation for the home side to drive forwards and punish a Taylors side offering very little, but frustratingly it was the visitors who shifted through the gears, passing the ball better than they had done at any stage during the match, switching the play constantly from side to side. Massey made some vital interceptions in the left-back slot and Taunton-Collins led by example down the right. Several players struggled to maintain their footing as the pitch became saturated by the continuous downpour, but Walsh’s handling of the greasy ball remained impeccable, even if kicking into the wind for both he and Alexi Pittalis became a hugely difficult proposition.

Nevertheless, the hosts held firm once more, restricting their opponents to a few crosses and long-range shots and little else. By the time George Patriche’s whistle blew for full-time, the contest had been over for a while.

The 2s register a fifth consecutive League victory for just the second time in the past eleven seasons, their previous run coming a few years ago on the way to a second-place finish and promotion from Division Three. Next weekend the side host the Old Chigwellian 2s and will attempt to match the 1st XI record of six consecutive League wins in that period, achieved in both the 2009/10 and 2011/12 seasons, although the club record of eight consecutive wins, earned by the 3rd XI on the way to the Division Five South title in 2017 remains some way off.

Given the current form and confidence of the squad, right now the sky is the limit.