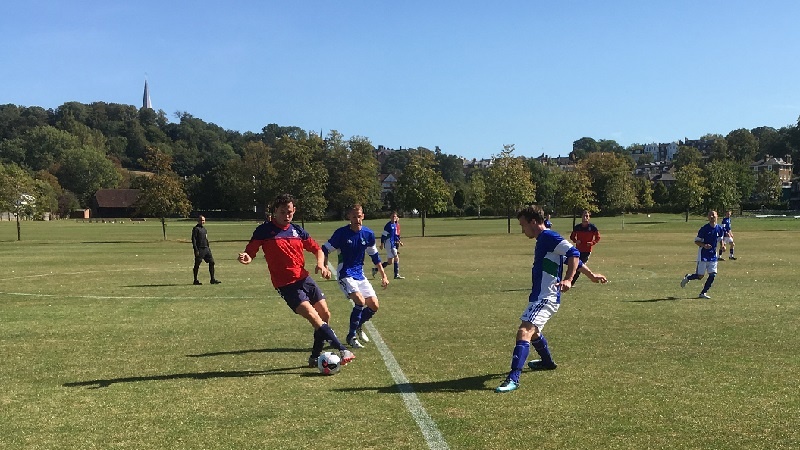 For the OHAFC 1st XI, the 2018/19 season was all about securing promotion from Division One: any other result would certainly have been considered an abject failure given both the current quality of the squad and the recent historical presence of the side in the Premier Division. Having achieved that goal in dramatic style with a come-from-behind victory in the last game of the season away to the Old Cholmeleians, there was a clear resolve among the squad to prepare thoroughly for a new beginning in the Arthurian League Premier Division in season 2019/2020.

Well-co-ordinated summer recruitment across the club has resulted in an enlarged pool of players, with three youngsters set for their competitive OHAFC debuts on Saturday. A comprehensive pre-season programme was undertaken, including several friendlies, the now annual intra-club match and an inaugural hour-long training session at Danes Academy in White City. With excellent attendance at all the sessions and a keen attitude throughout, there was genuine belief that the 1s had arrived for their first League fixture of the new campaign in better shape than in any recent season.

The visitors to the Hill providing the first test for the Blues were the Old Bradfieldians, who finished the previous season in eighth place in the Premier Division – either fortunate to escape relegation by a solitary point or unfortunate not to finish higher, given they were only a couple of points off fourth, depending on your viewpoint.

Conditions couldn’t be taken for granted, given the vagaries of the English summer, but as befitting a season opener, the two sides were greeted with warm sunshine and a rock-hard pitch on arrival at the Philathletic Ground. The testing nature of the pitch and fierce heat could be felt during the warm-ups, both sets of players sweating profusely prior to the noon kick-off.

For their return to Premier Division football, the OHAFC lined up as follows: Fraser McGuinness (GK & captain); a back four of Henry Charatan (debutant), Alex Breeden, Jonny Lalude and Alex Gilbert, who sacrificed himself at left-back allowing Charatan to play on the right; the midfield had plenty of experience with Doug Morrison, Dan Firoozan, Chester Robinson, Will Bamford and George Gould all supporting lone striker James Breeden, keen to show he could continue his recent outstanding goalscoring exploits at a higher level. Two further debutants were on the bench, Ed Beecham and Jamie Jordache.

And there was another new face on the Hill in the shape of referee Sachin Patel, who was officiating his first ever OHAFC fixture.

The hosts enjoyed the bulk of possession for the first five minutes, orchestrating play and putting some good moves together. But before long, the visitors’ answer to Luka Modric began to take charge of proceedings: a diminutive individual, wearing only astroturf trainers, he showed a sure touch and fine passing range and prompted his team forwards with tempo and purpose. The next ten minutes saw the hosts’ defensive shape tested. Their opponents occupied half-spaces and played through lines as any good team should. They threatened to break through on a couple of occasions, but centre-halves Alex Breeden and Jonny Lalude were quickly alert to any threats, snuffing them out efficiently. The pressing game in midfield, led by George Gould, worked well to frustrate the Bradfieldians. The 1s’ patience and diligence was soon rewarded with a simple goal involving just a couple of passes: Henry Charatan won possession from his opposite man and played a lofted ball up the right to Doug Morrison, the ball was squared and James Breeden was on the spot to slot home his, and Harrow’s, first of the season.

A similar build-up saw the hosts double their lead just short of the half-hour mark. As the sun beat down, Bradfieldian advances were met with Harrovian organisation and tenacity. A clearance found its way forwards to the OH front three and between them they managed to work an opening for James Breeden to place the ball around the keeper and into the net, the counter-attacking policy adopted by the Blues continuing to reap significant rewards.

If Breeden’s two early strikes had been rather perfunctory in nature, lacking their creator’s usual panache, he soon showed he was just as capable of terrorising Premier Division defences when he beat two defenders with mesmeric skill and fired a left-foot shot goalwards from an acute angle. It crashed into the post and teetered along the line, back into the path of a recovering Bradfield defender who managed to clear. On such moments can games sometimes hinge and, moments later, Harrow were ruing their luck as Bradfield broke down their left and, following a couple of unfortunate ricochets, pulled a goal back with a close-range finish.

But far from being cowed by the sudden change in momentum, the Blues pressed on and they restored their two-goal advantage almost immediately. Charatan found himself in possession at right-back and hit the space behind the Bradfield left-back. George Gould made a perfectly-timed arcing run to collect the bouncing ball just outside the area before lobbing the keeper with a volleyed effort, the ball landing perfectly inside the goal.

Half-time was gratefully received by both sets of players, the opportunity to take on fluids and rest wearying feet arriving not a moment too soon. The Blues were well aware that the job was only half done and a similarly efficient performance would be required in the second half in order to ensure a successful return to life in the Premier Division.

Initially, the hosts’ ascendency looked set to continue when some calm passing from the back kick-started an excellent Harrow move: Doug Morrison fired a cross-field ball to Will Bamford on the opposite wing, James Breeden’s near-post run drew the defence away, leaving Gould free just inside the D: sadly, his first-time effort from Bamford’s pull back was fierce but rose just over the bar.

The following ten minutes proved somewhat challenging for the OHAFC. McGuinness, suddenly called into regular action for the first time in the afternoon, was forced to claim a few dangerous crosses and turn a couple of shots round the post with diving fingertip saves. Chester Robinson, who had worked tirelessly throughout, was forced off injured following an aerial challenge, allowing Ed Beecham to make his OHAFC bow. And a second switch saw fellow debutant Jamie Jordache replace Charatan at full-back. Both players integrated themselves seamlessly into the swing of things, Beecham proving a real handful for Bradfield’s creative midfielder in the middle of the park, forcing him to drop ever deeper, Jordache showing sound defensive positioning and linking up with his winger Bamford wherever possible.

Consistent Bradfield pressure then resulted in a scrappy goal midway through the half and the game opened up somewhat as both sides chased what appeared would be the crucial next goal.

Fifteen minutes from time it was the hosts who found it, another excellent break saw James Breeden carry the ball forwards from halfway before crossing for Will Bamford to finish from close range – just reward for a Man of the Match display from the winger.

With their two-goal cushion once more restored, the Blues worked hard to see out the game. Pulses were raised when the Bradfieldians pulled yet another goal back with five minutes to go after a well-timed pass through the OH defence. But there was to be no late drama and the hosts saw out the final few minutes comfortably enough to claim a hugely encouraging win – the first time the side have won their opening fixture in a Premier Division season since a 3-1 victory at Brentwoods back in 2012.

Next weekend the 1s travel to south London for a meeting with a familiar foe: the Old Alleynians. Having started their season with a win and a draw from their first two fixtures, the OHAFC will once more have to be at their best to build on Saturday’s excellent display.

*Thanks to Dan Firoozan for this report