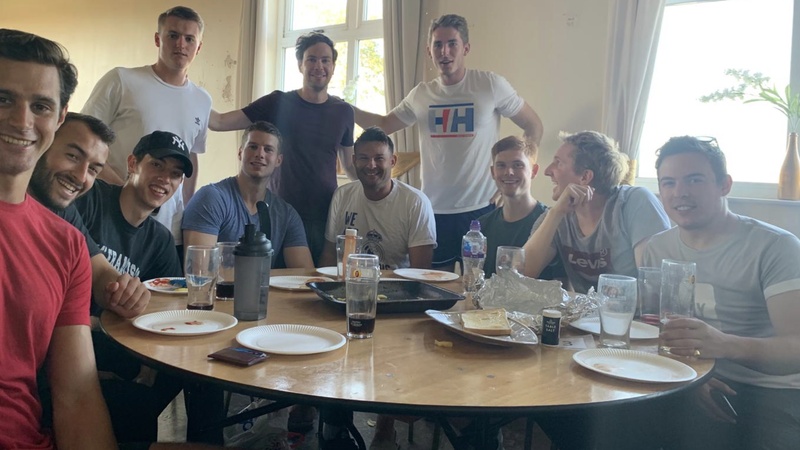 The OHAFC 2nd XI produced one of their most accomplished performances in recent memory on Saturday afternoon when they began their 2019/20 League campaign with a 6-3 humbling of the Old Foresters 2s in Fairlop Oak.

An outstanding first half saw the Blues blitz their opponents with four goals inside ten minutes midway through the half, further goals at each end ensuring the opening period ended with the visitors 6-1 ahead. With the wind and slope against them in the second half, the Blues held on well, conceding twice more via a dubious penalty and a goal in the dying moments. It was the side’s biggest victory in Division Two since a 5-1 win over the same opposition midway through the 2017/18 season and their best opening day result for at least the last decade. The three points lifts the Blues into fourth in the table, coincidentally the same position they held at the same stage last season, following a 3-1 win at home to Eton.

With a record of four defeats and a draw from their five previous visits to northeast London over the past decade, the Arthurian League fixture computer had handed Geoff Taunton-Collins’ side one of the hardest tasks on their calendar first up. That said, conditions for the trip around the north circular couldn’t have been more pleasant, with a warming autumnal sun and gentle breeze ensuring this northern outpost of Division Two looked as pleasant and welcoming as it had ever done before.

Player availability was mixed, with several members of the 2s core squad absent, including both the Curry brothers, goalkeeper Kyri Pittalis and forwards Will Payne and Gbeminiyi Soyinka. There was a competitive 2nd XI debut for midfielder Ed Beecham, who had already shown in the pre-season friendlies and in the 1st XI’s opening fixture the week before that he would be hugely useful for the club this season, and an OHAFC debut for James Parry, who slotted into the left-back role. Both Hutchinson brothers were available, something that only occurred once last season in the League, older brother Pablo leading the line with Andres on the right and Tristan David on the left.

Referee Stephen Tate completed a rare treble, having officiated the final games of both the OHAFC 1st and 3rd XIs last season, before now taking charge of the 2s opening fixture of this season – the first time he had refereed the side.

The hosts won the toss and chose to defend the goal at the far end of the playing fields in the first half, with a decent breeze, slight slope and low-ish sun all against them. And it was a somewhat inauspicious start for the visitors, although none of the conditions could be used as an excuse – from kick-off the ball was passed back to Lederman, who promptly fired it twenty yards out of play looking for his skipper on the right!

But having settled into their stride, the Blues began to find some joy down both sides of the pitch. Long balls over the top found a willing runner in Tristan David down the left, whilst Taunton-Collins raided forwards from right-back on several occasions, showing he clearly had the beating of both the Forest left-sided players.

With Harrow looking the more threatening but unable to test the Forest goalkeeper, there was little to hint at the flood of goals that suddenly arrived twenty minutes into the match. The opener came down that right-hand side with a well-worked move that saw the Harrow skipper drive to the goal line before cutting the ball back for Andres Hutchinson to cushion into the far corner with a first-time finish, the youngster opening his body perfectly to execute the coup de grace.

Five minutes later, another Harrow break saw the blue shirts pour forwards at a square Forest back line. Lederman squared to David, he played the ball through for Hutchinson to run onto and the striker just got to the ball before the onrushing keeper, poking the ball past him at full stretch.

Forest players were stunned and vociferous inquisitions soon began, both amongst themselves and directed at referee Stephen Tate, who in a short space of time had appeared to become public enemy number one for those in red. But much worse was to follow for the hosts as suddenly everything the visitors touched ended up in the back of the net. Two became three when Alexi Pittalis rose unchallenged at the far post to head home Lederman’s corner, before the veteran then sent Tristan David racing through on his own to finish calmly into the far corner. Forest launched furious protestations for offside, there appearing to be some confusion as to whether a defender’s intended interception of the through-ball ensured the Harrovian was on or off. Referee Tate remained unmoved, the goal stood and Harrow found themselves in dreamland, 4-0 to the good.

The hosts managed to pull a goal back in spectacular fashion when their outstanding central midfielder collected a loose ball on the edge of the box, looked up and drilled it into the far corner, the ball never deviating from its’ perfect trajectory. Forest were suddenly re-energised.

But any thoughts of a comeback were quickly doused as Harrow struck twice more in quick succession. Lederman and Pittalis again combined from a set-piece, a deep free-kick was dinked over the top of the Forest defensive line and the midfielder rose superbly at the near post, twisting to flick a header back across goal into the far corner.

And moments later it was six, with another superb break, this time down the left. The ball was fed into David’s path by the corner flag, he held it up well before laying it back into Lederman’s path, the veteran crossing first time to the penalty spot where Pablo Hutchinson collected with one touch before firing back across goal with his left foot – another pinpoint finish.

It was almost too good to be true, but there was no sense of the job being finished at half-time. Too many leads had been thrown away on this particular patch of grass in north London for those in Blues to believe the second half would be anything other than a struggle.

A fact that was soon borne out in the afternoon heat as the visitors found themselves pinned back inside their own half for long spells for the remainder of the game. Despite the wind and slope being against them, the visitors took too long to realise they could still have some success playing their way out of trouble rather than simply trying to thrash the ball down the field.

There was some frustration, probably partly justifiable, with the referee, who seemed to decide that for the remainder of the game every Harrow ball over the top should be penalised with an offside decision. Tristan David alone must have been whistled four or five times to increasing levels of Harrow annoyance.

By and large the defence coped well, with Forest over-hitting a large percentage of their through-balls and Walsh remaining alert in the Harrow goal. Ward and Woolley held the line well, dropping deeper as required, Taunton-Collins reined in his attacking instincts to produce a tigerish defensive display, and James Parry got stuck in at left-back.

With Beecham, Pittalis and Lederman working as hard as possible to frustrate the Forest midfield, paying particular attention to the increasingly-peripheral goalscorer, the visitors managed to restrict their opponents to a few long-range efforts and little else. A second was conceded in unfortunate circumstances when a Forest midfielder drove towards the Harrow box, tried to flick the ball past Ward, and earned a penalty when it was blocked by the defender’s arm. Quite how he was supposed to have avoided contact from a yard away was a mystery, but these days who knows what constitutes a handball and what doesn’t? Walsh dived the right way but almost went too early, the ball flying between his arm and body into the back of the net.

And as legs began to tire and spaces opened up the hosts pulled a third goal back minutes from the end with a well-worked move, a fine through-ball beating the offside trap to allow one of the Forest forwards to beat Walsh without difficulty.

Nevertheless, it remained a hugely encouraging win for the OHAFC, who attacked the game with a great attitude throughout, clinically exploiting their advantages in the first half before producing a solid defensive display in the second. Alexi Pittalis gathered the majority of the Man of the Match votes for a customary whole-hearted performance in midfield, and Tom Ward enjoyed his favourite match tea of the season: bread and butter the precursor to a mound of sausages and chips.

The side once more face a lengthy trip next weekend when they travel to play the Old Aldenhamians, opposition who generally prove to be highly unpredictable. The OHAFC, meanwhile, will be fervently hoping for more of the same.

*Many thanks to Jackie & Fred Woolley for the photos