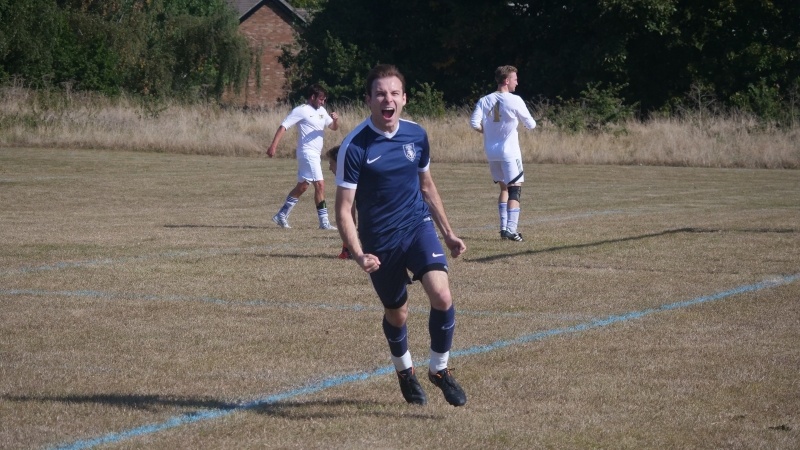 Two goals inside the opening twenty minutes allowed the OHAFC 3rd XI to overcome an obstinate Bancroftians side to record their first win of the new season and their first ever victory at the home of their opponents.

Following a hard-fought goalless draw at home to Salopians 2s last weekend, many of the 3s’ regular starters returned to the lineup for the trip to northeast London and the parched playing fields of Bancroftians Rugby Club. All three Barrett brothers were present, although Connor was only fit enough to play in goal – a handy coincidence, given that no regular keeper had made themselves available. Azhar Khan filled in at left-back, with Callum Barrett pushed forwards into midfield. Skipper Nick Kapoor took over the reins from vice-captain Charlie Bick, with Harry Bick restored to the attack. And there was a welcome first appearance of the season for midfield dynamo Olly Roberts.

The Blues had beaten their hosts only once previously from six meetings, two draws the best that had been achieved from the three away trips. But they started this game well, showing far greater ability to manage the ball on a dry, slightly uneven surface. With players of the calibre of the Bicks, Ned Callander and Doug Morrison in attack this was hardly surprising and with barely five minutes on the clock, the Bancroftians goal was already under threat. A free-flowing break forwards saw Morrison feed Roberts down the right, he switched play to a charging Harry Bick, who cut the ball back to the edge of the box, just missing a couple of Harrow runners.

The opening stages were played at a frantic pace with the visitors adapting well to the tricky pitch and searing heat. But it was from a simple set-piece that they took the lead after twelve minutes. Charlie Bick curled a delightful free-kick into the box from the right wing, the ball sailed over everyone to the far post where it was met with a thumping header from an unmarked Felix Tritton. The disappointment etched on the faces of the Bancroft defenders betrayed their slackness in dealing with the delivery.

Shortly afterwards referee Peter Dace was in the spotlight following vociferous Harrow appeals for a penalty: a long throw from Nick Kapoor clearly struck a Bancroftian on the arm but the match official remained unmoved, Harrow protests falling on deaf ears.

But the decision became a mere detail when the Blues doubled their lead five minutes later, Ned Callander flicking on a long punt forwards from the back allowing Harry Bick to race through and plant a precise finish inside the far post.

At that stage it appeared as though a surprisingly comfortable win could be on the cards for Harrow, but to the hosts credit they rolled up their sleeves and fought back, the remainder of the half a far more even affair than the action that had preceded it. The Harrow back four coped admirably however, with Kyle Barrett and Tritton winning the majority of their aerial challenges. Bancrofts did possess a couple of players with decent ability and the visitors didn’t always look completely secure, but the hosts were restricted to a couple of long shots and little else, Connor Barrett barely having a save to make.

Shortly before the break Harry Bick had a glorious opportunity to put the result beyond doubt when he raced onto a Doug Morrison through-ball with just the goalkeeper to beat. Disappointingly, a woefully heavy first touch sent the ball flying into the box and the chance was lost.

With no substitutes to call on, half-time was spent replenishing lost fluids and ensuring heads remained focussed on the job in hand.

Which was just as well as the second half became a real struggle for the men in blue. Bancrofts lifted their game, pressed hard and put the visitors under considerable pressure. Harrow’s defence continued to keep the chances to a minimum, but they were put under further strain when Azhar Khan incurred the wrath of Mr Dace for some chat and was sent to the sin-bin for ten minutes – Azhar earning the dubious honour of becoming the first OHAFC player to be penalised in this way.

The result of this was that play was continually focused in the Harrow half, with sporadic breaks forwards from the tireless engine room of Olly Roberts, Ned Callander and Harry Bick.

That neither side could produce a goal was down to some excellent defensive work from both teams and some tired limbs as the game wore on. With a comfortable two-goal advantage, this suited Harrow just fine and they were finally able to celebrate a first ever away win against their opponents.

The victory should prove a real fillip to the side, with many of the regulars back in action and an excellent performance earning them three points at a tough ground to win at. The four points secured from the first two matches sees the side sitting in third in Division Four, two points behind early leaders the Old Alleynians 2s and the Old Kimboltonians.