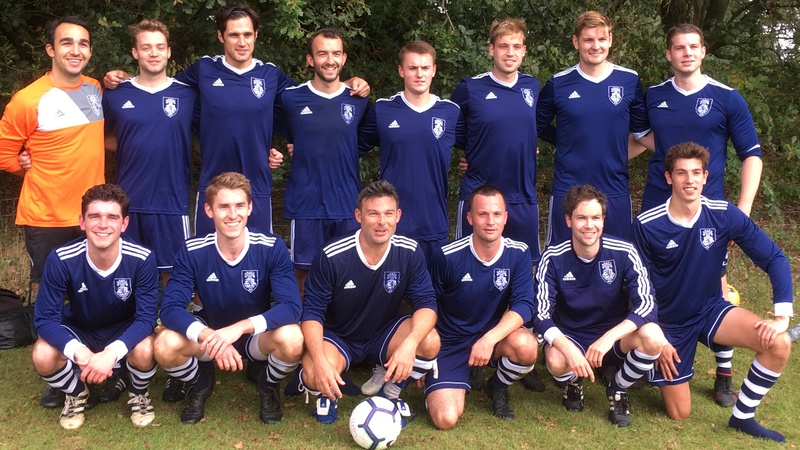 The OHAFC 2nd XI continued their fine start to the season with another excellent away win, overcoming the Old Aldenhamians 3-1 in Hertfordshire to maintain their 100% record and, for the first time in club history, move top of Division Two.

The Blues made a lightning fast start on Saturday, scoring twice inside the first six minutes. With barely two minutes on the clock, Lederman sent Andres Hutchinson racing through the middle and he made no mistake, sidefooting home into the far corner. And shortly afterwards Hutchinson was involved in the second Harrow goal, freeing his brother Pablo on the right, he squared the ball across the box and Tristan David arrived to fire into the top corner first time.

Despite this horrific start, the hosts fought back well and dominated much of the rest of the first half, pulling a goal back ten minutes before the break. The second half proved something of a damp squib, with two of Aldenham’s best players having to leave and the visitors content to sit on their lead with a disciplined defensive shape. When Ed Beecham fired in on the turn following a far post corner the two-goal lead was restored and the visitors held on comfortably to ensure the win.

Skipper Geoff Taunton-Collins was able to name a strong squad of fourteen for the trip, this despite the continued absence of both Curry brothers and striker Gbeminiyi Soyinka. Kyri Pittalis made a welcome return between the posts, Will Monroe made his first competitive appearance of the season at left-back and there were also a trio of debutants on the bench, with Jack Dolbey, Jack Orr-Ewing and Rollo Hovey involved for the first time this campaign.

Much of the pre-match chat focussed on the opponents and their reputation for chasing victory at all costs. As it turned out, the game was played in a decent spirit throughout with a couple of late challenges the most that experienced referee Adam Knight had to deal with.

Conditions at Aldenham School were decent enough, with the forecast rain mainly staying away, and a pitch that was in reasonable shape, even if it could have done with a bit of a closer mow. Nevertheless, the Blues put any concerns well and truly to one side when they launched into a superb opening spell that saw them dominate possession and tear into their hosts from the first whistle. Some composed passing allowed Lederman the time and space to look up and send Andres Hutchinson racing through with just the keeper to beat, the youngster making no mistake as he passed the ball across the keeper into the far corner. And a superb move five minutes later saw the lead doubled as the ball was again worked swiftly through the middle and out to the right wing, younger Hutchinson teeing up older brother Pablo to cross to the near post where Tristan David made a superb run, darting across the box to connect first time and fire the ball into the roof of the net under pressure from his marker.

At this stage it appeared as though another six-goal first-half could be on the cards following last week’s remarkable start away to the Old Foresters. But Aldenham had other ideas and they gradually fought their way back into the game, utilising the electric pace of their right winger to excellent effect, Will Monroe unlikely to face a trickier opponent all season. Indeed, as pressure began to build on the visitors, they employed ever more desperate means to stay in control. Lederman was hugely fortunate to avoid a caution when he deliberately tripped the player from behind to prevent him running at the Harrow back four and skipper Taunton-Collins then decided to switch flanks to try and match pace with pace – a fact the Aldenhamian clearly enjoyed when he wished Monroe all the best over on the other side of the pitch.

Aldenhamians other star player was a short, fleet-footed central midfielder who proved highly elusive in the middle of the pitch. Time and again he collected the ball, looked up and sprayed it left or right, the Harrow central trio of Beecham, Alexi Pittalis and Lederman struggling to keep tabs on his movements. The hosts forced several corners, all of which were dealt with well enough, but it was something of a relief when the half-time whistle blew and Harrow’s lead was still intact. With a plethora of options on the bench, the skipper brought Rollo Hovey on at the break, with tigerish midfielder Jack Dolbey following soon after. Unbeknown to the visitors, two of Aldenham’s players had to leave early, including their impressive central midfielder.

This became more apparent the longer the second half progressed, with the visitors competing on far more even terms. Two well-marshalled defensive lines prevented much penetration from the Aldenham attack and although they continued to enjoy the majority of possession, Kyri Pittalis remained untroubled in the Harrow goal.

Going forwards, the Blues looked dangerous on the break, with Pablo Hutchinson working tirelessly up front until injury forced him from the field. Younger brother Andy took up the slack and, along with Tristan David, the pair of them ran tirelessly to keep the Aldenham rearguard occupied. But it was from a set-piece that the decisive third Harrow goal arrived, the Blues scoring from a far-post corner for the second consecutive game, Lederman’s delivery headed back across goal by Tom Ward and Ed Beecham swivelled to slam the ball in from close range.

With the entrance of Jack Dolbey into midfield and Jack Orr-Ewing at the back, the visitors had plenty of running in them and the final stages became an object lesson in how to hold an opponent at arms’ length. The hosts looked busy on the ball and played some intricate football but there was little end product and never a suggestion that they could force a nervous climax to the match.

With the news of other results filtering through, it became apparent that the Blues would sit proudly on top of Division Two on Saturday night – for the first time in the history of the OHAFC. Early in the season of course, but very positive early signs for an excellent season ahead.

Next Saturday the 2s enjoy their first home game of the season, with the visit of the Old Rugbeians to the Hill. The sides have never met before, although the Rugbeians enjoyed a League ‘double’ over the OHAFC 3s in the 2016/17 season.