OHAFC ease into Cup 2nd round with comfortable win 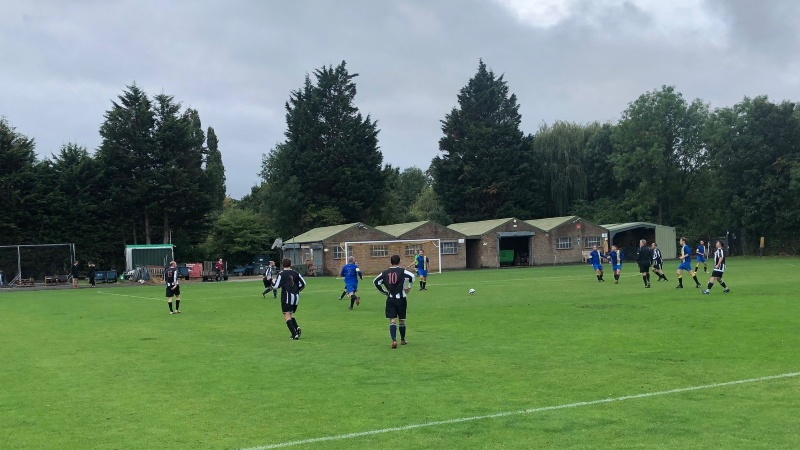 The OHAFC Veterans eased into the second round of the Derrick Moore Vets Cup with a comfortable 6-3 win over the Old Reptonians at the Bank of England Ground on Sunday morning. John Wyn-Evans’ side will now face the Old Salopians in round two with the tie to be played on November 10th.

Playing against only ten men in the first half, the OHAFC opened up with some wonderful football against an under-strength Repton side. Passing the ball across the back and midfield with precision and purpose, the hosts carved open the opposition on numerous occasions, scoring three times to establish a winning advantage.

Paul Molloy drove home from the edge of the box before then rounding off a superb move that saw the hosts string together over twenty passes, leading to Piers Bourke crossing from the right for Molloy to head home at the far post. The goalscorer was then hacked down inside the box for a blatant penalty, Dom Danos converting. At this stage it appeared a case of how many the OHAFC could rack up, but such was the ease with which the home side were dominating, they soon lost their concentration and their level of play dropped.

Repton took advantage to create a couple of half chances of their own, their left-back driving past three or four statuesque Harrow defenders before firing over the bar. But they were gifted a goal minutes later when Warner and Butler somehow contrived to stare silently at each other for a few seconds while the ball bounced between them, allowing a Reptonian to steal in and bundle the ball home.

Fortunately, the hosts responded shortly afterwards to restore their three-goal advantage, Danos finishing off another well-worked move, Matt Davis crossing from the right. But the visitors then earned a penalty of their own with another blatant foul inside the box. Butler was sent the wrong way and the lead was reduced to two once more.

Still the goals kept coming, with Harrow ending the scoring for the half with Matt Davis getting his name on the scoresheet to ensure the hosts went in at the break 5-2 to the good.

Half-time saw the visitors bring on a substitute to swell their ranks to the full quota, the result being that much of the football after the break was more even, the OHAFC continuing to play at well below their best for long spells, with too many touches and an inability to play a simple pass hurting them.

Things livened up towards the end when the visitors pulled a goal back, but again Harrow responded, Dom Danos racing through five minutes from the end to complete his hat-trick and finish the scoring at 6-3. By this stage Lederman had become a victim of the new sin-bin law, when he was banished to the sideline for the final seven minutes of action, the midfielder enquiring too vociferously about the lack of what appeared a certain penalty for handball.

None of this mattered, with the result having been a foregone conclusion for a while. Tougher tests await no doubt, but this was a decent enough run out for the OHAFC and they now move on to face the Old Salopians in the second round on November 10th.