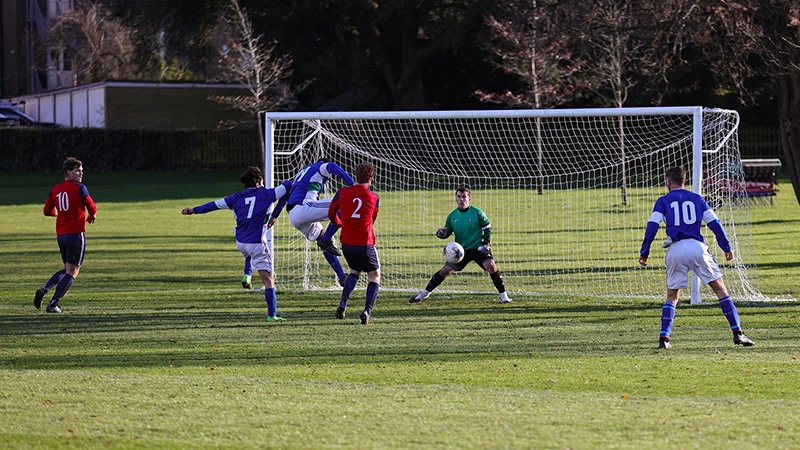 Despite the month-long, COVID-enforced interlude, the OHAFC 1st XI season failed to deviate from what had gone before, with the Blues returning to action with another comprehensive defeat, this time falling 6-1 to the high-flying Bradfieldians.

The result was hardly a surprise given the poor availability from the OHAFC, with 2nd XI regulars Pablo Hutchinson and David Lederman forced into action (the latter becoming the oldest player to represent the side for many years) and the 3s' Callum Barrett the sole substitute. Andrew Holmes returned for his second appearance in OHAFC colours.

The League could not have chosen a finer weekend for the resumption of hostilities, with the Hill bathed in winter sunshine and the Phil pitches in superb condition. With the visitors wearing their traditional royal blue shirts, the hosts were forced into their change shirts of red with navy trim.

Despite a decent enough opening quarter of an hour, the OHAFC conceded twice in the space of ten minutes courtesy of two wayward passes inside their own half that were ruthlessly pounced on by the Bradfieldians. The first shot was a superb curling effort from outside the box, struck with complete confidence by the left winger, who cut inside and fired past the despairing dive of the Harrow skipper. Soon afterwards, a poor clearance from McGuinness allowed a more simple finish and the visitors doubled their advantage.

To Harrow's credit they refused to buckle and just before the half-hour mark were back in the game when Chris Abdo read a risky crossfield pass from the Bradfield left back, collecting the ball and driving down the left wing before squaring to allow a simple tap-in for Pablo Hutchinson to score his first ever goal for the side.

Confidence restored, the hosts continued to battle away, although possession was still dominated by the visitors, who passed the ball around in midfield with the confidence of a side who have played together for considerable time. The Harrovian cause was not helped by a muscle injury to Andrew Holmes, who limped off with a hamstring strain, Callum Barrett coming on as replacement.

The red shirts of Harrow did well to limit their opponents to a few half-chances and little more and then, shortly before the break, constructed a fine move down the left that so nearly led to an equaliser, Hutchinson just unable to get his head to another cross from Chris Abdo with the goal at his mercy.

This spurned opportunity was given greater prominence moments later when the visitors broke upfield at pace to score a third, the referee's half-time whistle blowing soon afterwards. With Andrew Holmes' hamstring still not feeling good enough to allow him to resume playing, skipper McGuinnes kept the same eleven for the start of the second half, but the hosts got off to a dreadful start, conceding a fourth inside the first five minutes, killing off any faint hopes of a comeback.

A tiring Lederman was wtihdrawn on the hour-mark, Holmes able to see out the final thirty minutes, although there was little to enjoy from a Harrovian perspective, with the attack almost non-existent and the over-worked back four simply trying to limit the damage.

The visitors did score twice more to give the scoreline a thoroughly one-sided appearance, condemning the OHAFC to a sixth League defeat of the season and leaving them rooted to the foot of the Premier Division table. The squad must make a greater effort to turn out going forwards otherwise a return to Division One will quickly become an inevitability.