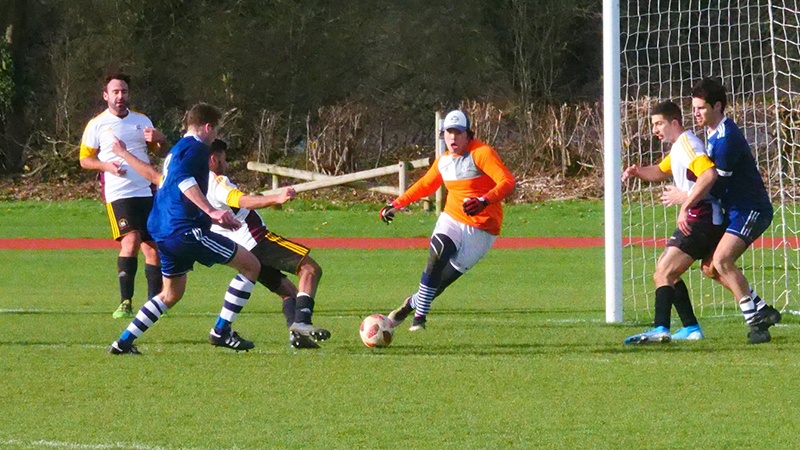 Good news: the OHAFC 2nd XI have rediscovered their scoring touch, doing so in some style on Saturday afternoon away to the Old Merchant Taylors. Bad news: they have now forgotten how to defend, aiding and abetting their opponents in a variety of ways throughout the game. The result was a ninety minute maelstrom that saw the Blues struggle initially, fight their way back into the game, speed ahead either side of the break, before finally relinquishing a two-goal lead inside the final ten minutes: Taylors scored their fifth, and the game’s tenth, in the final moments, probably extinguishing for good any lingering hopes the 2s had of catching the Old Carthusians at the top of Division Two.

In truth, a draw was probably a fair result on the balance of play over the ninety minutes. Taylors started the sharper, passing the ball crisply through the midfield and feeding their electric right winger at every opportunity. It was clear early on that Monroe and David would have their hands full down that side, even though a strong crossfield wind ushered the ball towards the opposite wing in the first half. They dealt with the threat reasonably well, although the visitors struggled to relieve the pressure on the back four, with possession ceded too easily on an immaculate, wide pitch.

Soyinka ploughed a lone furrow up front, starved of decent service as the Harrow midfield scuttled around trying to keep up with the pace of their opponents’ play. Although 2s debutant James Lo was fairly well protected in the Harrow goal, he had to be alert to a number of through balls, dealing with them well. Several corners were also defended solidly, and although Taylors maintained the upper hand, a goalless first twenty minutes suggested a tense, tight affair in prospect.

That was before a rare mistake from Ollie Curry allowed the hosts to open the scoring and, from that moment onwards, the game sparked into life. The Harrow midfielder’s square pass inside was intercepted just outside the penalty area, the Taylors midfielder cut inside before curling a beautiful shot beyond Lo into the far corner.

Harrow responded, finally bringing Tristan David into the game on the left wing, and the wide man was the supplier for Harrow’s equaliser, delivering a fine cross to the far post for Max Curry to head powerfully downwards, a fitting finish to an excellent Harrow move. The second Harrow goal, which arrived barely two minutes later, was rather more direct in nature, but just as effective. Ed Beecham, who enjoyed a fine game at centre-back, won the ball in midfield and fed David in the inside left position, he in turn picked out Alexi Pittalis on the edge of the penalty area and the midfielder somehow bundled his way through a couple of half-hearted challenges before prodding the ball past the Taylors’ keeper.

But having fought their way back into the lead, the visitors then committed another basic error to allow their opponents to level once more. This time, hesitancy on the left-hand side of the penalty area allowed a Taylors midfielder to run through when the ball really should have been cleared. A simple cut back allowed an even simpler finish past Lo from six yards out and the two sides were level once more.

And the hosts then completed their own dramatic turnaround a few minutes later with a well-worked goal, driving a long ball over the head of substitute Ed Massey at left-back and inviting their quick winger to give chase. It was debatable whether or not the ball had gone over the line, the mere fact the winger got there at all was highly impressive, and the subsequent cross was again convincingly finished from close range. Taylors were now 3-2 up but, remarkably, there were five more goals still to be scored in the game.

The sixth arrived a couple of minutes before the break, with Pittalis again the key figure. He tumbled inside the box after Soyinka had flicked on Harry Woolley’s long pass forwards. Although referee George Patriche initially appeared unsighted, a slight pause gave way to a blow of the whistle and the spot-kick was awarded. Lederman stepped up and calmly sent the keeper the wrong way, the sides now locked at 3-3 heading into half-time.

Interestingly, it was probably the most urgent half-time team-talk the OHAFC 2s have had this season, with several issues in need of resolution – not least the clear message to cut out the individual errors at the back. There was also a desire to step up the pace somewhat and press the opposition higher up the field, rather than be dictated to, as had been the case for the opening half-hour.

The request from the skipper for greater drive and urgency clearly had an effect. The visitors stormed out of the blocks from the first whistle and dominated the first twenty minutes of the half, Taylors now penned inside their own half, unable to play their way out of trouble with anything like the same level of comfort that they had enjoyed in the first half.

And the Blues were rewarded for their greater aggression with two sumptuous goals from the veteran David Lederman, who completed his first Saturday hat-trick for the club in over a decade, scoring twice in quick succession to hand the visitors a decisive advantage. Both were perfectly placed right-foot finishes from central areas. The first arrived courtesy of an excellent build-up that saw the ball worked into the box, Owen Edmunds fed Soyinka and he held the ball for a split second before teeing up the midfielder, Lederman calmly slotting home from fifteen yards out into the bottom far corner through a crowd of players.

Lederman’s third, and Harrow’s fifth, was even better, with Massey this time the provider following a brief spell of pinball on the edge of the box. The ball broke sideways and Lederman again calmly curled the ball from the edge of the box into the top corner, the ball drifting on the wind before crashing into the top of the post and into the opposite side of the net.

At this stage, it appeared as though the Blues would march on to a first League win since the start of November, such was the level of their dominance. But further chances proved hard to come by, Taylors hanging around like that last set of guests at a house party who just refuse to go home.

Lederman and Pittalis were removed from the fray, Will Monroe now occupying a central midfield role, and although Lo remained relatively untroubled in the Harrow goal, the balance of play swung in the home side’s favour going into the final ten minutes.

There was still little sense of panic from the visitors, but when Taylors scored a scruffy fourth with just over five minutes remaining, the sense of nervousness among the Harrow ranks was almost palpable. Again the trouble was caused by Taylor’s winger, again it was preventable. Having driven down the left to the byline and crossed, the defence appeared to have numbers back. But nobody managed to definitively clear the ball and it was somehow bundled in from close range via a series of deflections.

The clock ticked ever slower towards the ninety-minute mark, the Blues still defending with just enough resolution to suggest the win they so badly craved would ultimately be delivered. But in the final minute the dreaded equaliser arrived. This time there was little that could be done from a defensive point of view. A perfectly-weighted long ball forwards bypassed the Harrow centre-halves and left skipper Taunton-Collins in a foot race with the quickest Taylors winger, who had cut in from the right. The forward just got to the ball first, poking it over Lo’s head and into the back of the empty net to spark jubilant celebrations from his teammates. George Patriche’s whistle blew barely thirty seconds after the restart, Harrow’s long wait for a League win now stretching, remarkably, into a fourth month.

Understandably, the sense of disappointment afterwards was acute, with the side having squandered not only a great chance of three points, but also any realistic hope of catching the Old Carthusians 2s at the top of the table. With sides below them in the table gradually gaining ground, the Blues now face a fight to hold onto second spot with six games remaining. The Junior League Cup appears the sole route left to silverware this season.

The statistics lay bare the alarming change in the side’s fortunes. The first six League games of the season saw the side score 24 goals and concede 8. The last four have seen just 6 goals scored and 12 conceded – 8 of those have come in the last two fixtures away to mediocre Rugbeians and Merchant Taylors teams. Individual errors have begun creeping in, whilst the concession of goals late in games has also become problematic: Carthusians, Rugbeians and Merchant Taylors have all scored against the Blues inside the final quarter of an hour.

Next Saturday will provide an escape of sorts, with League problems put on hold as the side travel the short distance across the river to take on the Old Eastbournians in the quarter-finals of the Junior League Cup. Whilst Eastbournians sit fifth in Division Five South and, on paper, represent a simple enough challenge to overcome, the poor pitches in Barn Elms are likely to work in the hosts favour and ensure that another careless performance ends any hope of the OHAFC having something tangible to show for their efforts come the end of the season.