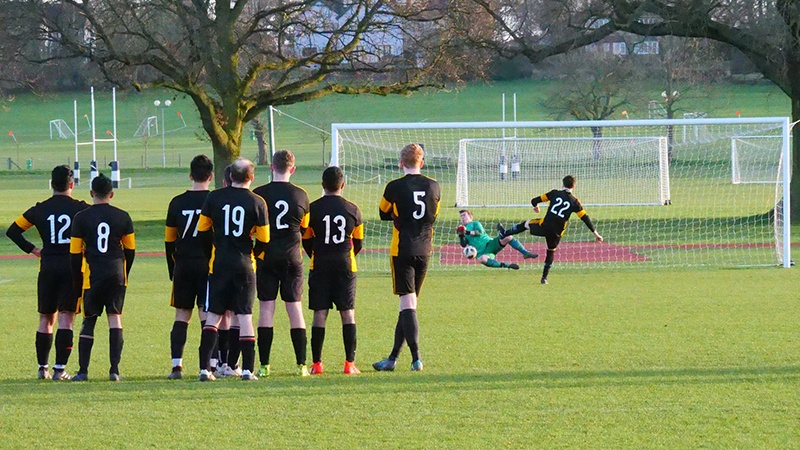 The OHAFC 3rd XI were eliminated from this season’s David Woolcott Trophy at the first hurdle following a 4-3 penalty shootout defeat to Old Merchant Taylors 2s on Saturday afternoon. The two sides couldn’t be separated in ninety minutes, in a game of few chances that failed to produce a goal. The Blues now have three League games remaining with which to try to preserve their Division Four status.

Despite only a bare eleven travelling up to Northwood, the visitors put in a solid display against a Taylors side bolstered, somewhat controversially, by several players who had earlier turned out for the 1st XI in the game against the OHAFC 2s.

Nevertheless, in a tight first half that the home side shaded, both teams came close to breaking the deadlock. Surprisingly, it was defender Adam Graham with the visitors’ first near miss, an excellent long-range strike that was well held by the Taylors keeper as he back-peddled, the ball heading just under the crossbar at the far post. Mikey Watford then came within inches of scoring, firing against the bar with a left-foot effort from the angle.

Between those two strikes, however, Taylors had a glorious chance to take the lead when they were awarded a penalty by referee George Patriche. Toby Colehan was adjudged to have bundled over a forward on the edge of the box, although it was hard to see in the tangle of legs just who caused the tumble. In the end, it didn’t matter, Fraser McGuinness diving to his right to save a fairly weak effort from the penalty taker.

Indeed, the 1s keeper, making his first 3s appearance of the season, was a busy man as he was continually asked to collect a number of through-balls from the Taylors midfield. This proved slightly more problematic than it should have done, a couple of needless collisions with the centre forward ensuing. And the Harrow man appeared to have hurt his pelvis when treading awkwardly on the ball attempting a clearance. The twinge eased sufficiently to allow him to continue, his kicking apparently unaffected.

The second half never really got going, with the strong wind blowing across the pitch helping neither side. Chances were few and far between, with neither goalkeeper tested to any great extent. Harrow’s best moment came late on, another Adam Graham strike from a corner was blocked on the line leading to frantic attempts to force the ball in. But Taylors escaped and despite the visitors being reduced to ten men for ten minutes following Colehan being sent to the sin bin, the inevitable penalty shootout duly followed.

Both sides missed one of their first four attempts, Taylors scored their fifth, and that meant Mikey Watford had to score to force sudden death. Sadly, his attempt to fool the keeper failed and a weak shot was comfortably saved by the stationary Taylors stopper.

A disappointing exit but a valiant effort by the 3s, who must now focus their attention on the remaining trio of League fixtures.