2s breeze past Eastbournians into the semi-finals 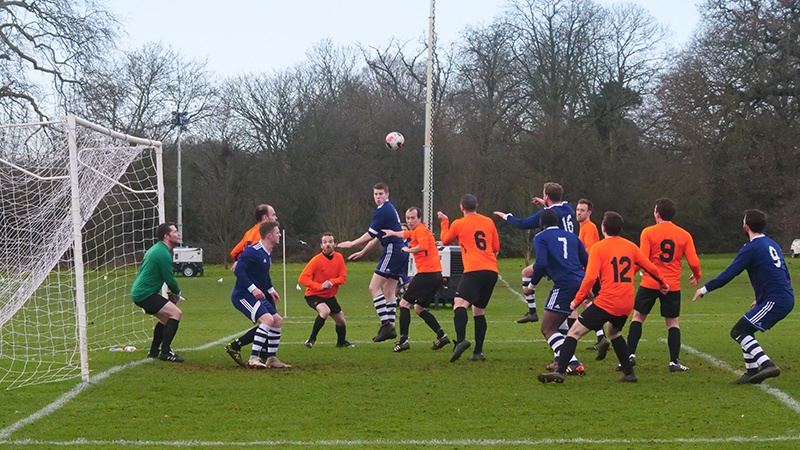 After all the pre-match talk of a potential upset, this Junior League Cup quarter-final tie proved a mere stroll in the sunshine for a focussed and well-prepared OHAFC 2nd XI, who battled hard in the first half to establish a 2-0 lead before easing away in the final half-hour to a comfortable 6-0 victory over a distinctly limited Old Eastbournians side. The Blues earn a home tie in the semi-finals against a side they have never faced before: Division Three high-fliers the Old Columbans.

After last weekend’s shoddy defensive display away to the Old Merchant Taylors, and given the notorious vagaries of the pitches in Barn Elms, skipper Geoff Taunton-Collins made the pre-game instructions to his thirteen-man squad crystal clear: no risks at the back, compete for every ball, play more direct than usual and focus intently at set-pieces. The Blues carried this out to perfection, barely giving their hosts a sniff of goal to record just their third clean sheet of the season.

Although there was little wind and some pleasant warming sunshine, the tight nature of Pitch 5 at Barn Elms produced the expected battle in the first half. It was clear from fairly early on that the hosts, languishing just two places off the foot of Division Five South, possessed a very limited attack and a fast start by the OHAFC could put the tie beyond them. The visitors so nearly achieved this, with both Andres Hutchinson, returning to action following an ankle problem, and Gbeminiyi Soyinka spurning good chances inside the opening quarter of an hour. The former found himself racing through down the inside right channel, but his sidefoot finish was weak and straight at the keeper; meanwhile, Soyinka was undone in a couple of similar situations, once by the pitch as the ball bobbled under his feet allowing a defender to make a recovering challenge, the second by an inaccurate finish, the ball sailing wide of the near post.

Eastbournians battled away without ever getting behind a tightly-marshalled Harrow back four, led by the experienced Woolley, although the left winger tested Taunton-Collins on the outside a couple of times. For the most part, the game lived down to all expectations, with accurate passing and control at a premium. There were a couple of brief scares at the back for the visitors, keeper Tom Mitchell over-stepping his penalty area at a goal kick and being rightly penalised by referee Hugh Wylie – fortunately the subsequent effort was blocked and then cleared – and the Harrow stopper was then forced into his one save of the match as he tipped over a header from a set-piece.

But with half an hour gone, and little to thrill the small crowd that had gathered pitchside, including Old Carthusian season ticket holder John Greenwood, the visitors took the lead courtesy of a superb strike from Max Curry. Some sustained possession down the right ended with Andres Hutchinson playing a square ball across the edge of the box. The experienced midfielder set himself with his first touch before planting a well-struck shot between a couple of defenders and into the near top corner, the keeper barely moving.

Harrow’s second goal arrived just a few minutes before the break, ending the tie as a contest, although it was very different in nature to the first. This time an excellent move down the left saw Beecham feed Massey who in turn played in Tristan David. He won a throw-in level with the edge of the box and from the ensuing ball in a lengthy bout of head-tennis followed, Alexi Pittalis finally benefitting following a strong challenge on the keeper from Soyinka.

No changes were made at the break, the second half getting off to rather a staccato opening when the Eastbournians keeper suffered what looked a rather painful rib injury following a challenge from Tristan David. Initially, it looked impossible for the Eastbournian to continue, but following a lengthy recovery period, he assured everyone he was capable of doing so and duly resumed his duties between the posts. Unfortunately, a second challenge soon after saw him felled once again, with the referee and Soyinka exchanging lengthy views inside the centre circle.

Once the football resumed, the final half-hour saw the gap in class between the teams finally tell, as the Blues began to open up their tiring opponents on a regular basis. The third goal was a family affair, Ollie Curry delivering a free-kick onto the penalty spot for his unmarked brother to head home. Tristan David then collected a clearance out from the back and sprinted down the left before firing home low inside the near post to make it four. And having given his mouth a rest for a bit, Gbeminiyi Soyinka then returned to what he does best: sticking the ball in the back of the net. An excellent combination up front with the tireless Alexi Pittalis saw the pair exchange passes, Soyinka teed up his teammate with a backheel and was then on hand to fire in the rebound after the keeper had parried the initial shot. The scoring was concluded five minutes from time, another break out from the back allowing substitute Lederman to cut inside the left-back before picking out Soyinka at the far post, the striker producing a fine header back across goal, over the keeper and just inside the far post.

A highly determined and concentrated performance from the Blues, who justly take their place in the last four of the Junior League Cup for the second time under the stewardship of Geoff Taunton-Collins. Division Three high-fliers the Old Columbans await in a fortnight’s time on the Hill, in a game that is likely to prove a far sterner test than this one. First up, however, is an equally important fixture: the home League game against the Old Etonians 2s, who have just replaced the OHAFC in second place in Division Two.