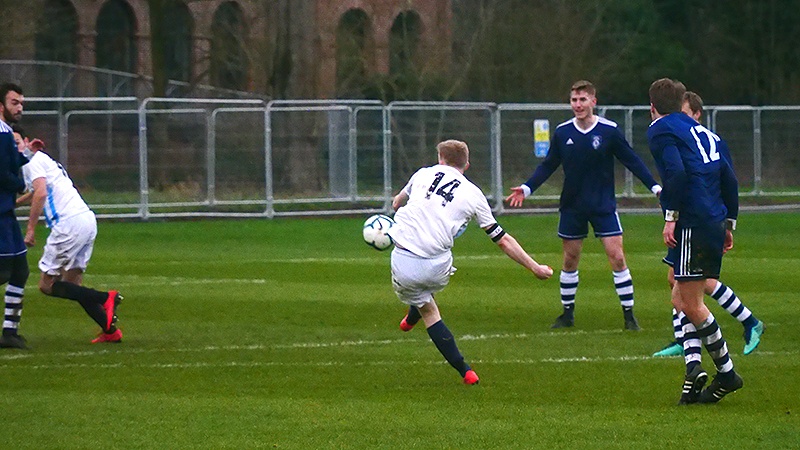 The OHAFC 2nd XI’s worrying run of League form continued on Saturday morning with disappointing 4-2 defeat on the playing fields of Eton. Despite starting well and taking the lead through an Andy Hutchinson header, the Blues, nominally the home side on the day, failed to defend set-pieces all game, with the result that they conceded three times from corner kicks. A tight offside call also went against the back four in the build-up to the other Eton goal, with a late Pablo Hutchinson effort providing only a brief moment of hope. The defeat means the OHAFC 2s have still not won in the League since November 2nd, a run that now stretches to five games.

Following the League’s rather strange insistence that this fixture be switched to Eton, despite the Blues having already won at the ground earlier in the season, conditions in Berkshire were far better than could be expected, with the wind not nearly as strong as predicted and the rain holding off for the most part. The main pitch at Eton, exotically named ‘Mesopotamia’, had already hosted the OHAFC 1s’ superb 3-0 Dunn Cup victory back in October – it was now the turn of the 2nd XI to try and complete a memorable win double and, in the process, catapult themselves back into second in the table above their opponents.

There was encouraging news when the squad was announced, with Tom Ward having fully recovered from his hamstring tear and able to take his place on the bench with a view to playing for half an hour. He was joined by Ed Massey, with Will Monroe and David Lederman regaining their places in the starting eleven following last weekend’s Junior League Cup battle at Eastbournians. Pablo Hutchinson returned up front having missed the previous two fixtures skiing and posting pictures on Instagram.

The visitors made an encouraging start on the huge, immaculately-manicured pitch, spreading the play with confidence and trying to free wide men Tristan David and Andres Hutchinson. David, especially, broke free several times but on each occasion he was left with either too many men to beat or not enough support in the box. The result was that despite looking the better side, the visitors failed to test the Eton keeper.

But that changed just short of the quarter-hour mark when yet another perfect Ollie Curry delivery from a free-kick allowed Alexi Pittalis to leap highest inside a crowded penalty area, above the Eton goalie, and although his header appeared destined to drop into the back of the net, Andres Hutchinson made absolutely sure, stooping to nod home from a yard out amidst several Etonian appeals for offside. With VAR unavailable, even though Eton’s Mesops pitch is closer to the headquarters in Stockley Park than any Premier League ground, referee Adam Knight gave the goal and the visitors had the advantage.

It was to be a rare bright spot for the Blues however, as they quickly found themselves under some sustained pressure at the back. This was partly due to the Etonians’ superior ability to pass their way across the pitch, but aided by the OHAFC finding it tricky to work out exactly what their game plan was. The huge, billiard table-flat pitch should have proved a blessed relief after the previous week’s struggles on the tiny mud heap in Barn Elms, but instead the visitors appeared lost, relying on lone breaks from their wide speedsters to relieve the pressure. Pablo Hutchinson dropped ever deeper to try and help win the ball back, but this meant that the side lost their focal point in attack. Gradually, frustration crept in as the tide began to turn firmly in the hosts’ favour.

Despite this, the concession of two quick goals midway through the half could have been avoided. The first came from a corner on the left, wickedly curled in on the wind, flicked on and an unmarked Etonian at the far post headed home. Soon afterwards a break through the middle of the pitch saw the ball played into the right winger who had come off his touchline. His immediate first-time flick between the centre-halves left the striker to run through and slot the ball through the legs of Kyri Pittalis. Again there were strong appeals for offside, with the Harrow skipper, standing at right-back, convinced the line had been perfectly held. From the touchline it appeared too close to call.

The Blues were now under the pump and thoughts of reaching the interval only a goal behind began to creep in. This, too, proved beyond them however, as another corner produced another Eton goal. Again from the left, again the ball was whipped in on the wind with pace. But a loud shout of ‘keeper’s’ from Pittalis saw the defence momentarily freeze, only to watch in horror as the ball sailed over the head of the Harrovian stopper, allowing a simple finish from a couple of yards out for an onrushing Etonian. Pittalis was to make amends for that error shortly afterwards with probably the save of the season, as he flung himself at full stretch to his right to palm away a shot destined for the far corner.

The visitors had one excellent chance in the moments prior to the half-time whistle to reduce the arrears when a press deep in Eton territory saw Andres Hutchinson steal the ball from a defender. He fed Lederman inside and his delicate, first-time clip over the square back four allowed Hutchinson to run with just the keeper to beat. Frustratingly, the ball arrived at an awkward height and the youngster was slightly off-balance when he connected, shanking the ball high and wide of the target.

At the break, skipper Taunton-Collins was forced into one change, with Lederman struggling with illness and asking to be removed. Monroe slipped into midfield, with Ed Massey replacing him at left-back.

And despite failing to really come to a conclusive plan about how best to claw their way back into the game, the visitors again made a strong start to the half, dominating the opening quarter of an hour, just as they had done in the first half. Both Curry brothers raided forwards from midfield, Tristan David again enjoyed plenty of the ball on the left, and this time Harrow attacks looked more threatening, even though it was still a struggle getting enough men in the box. The fact remained, however, that for all their positive play, the visitors had still not tested a rather suspect-looking Eton goalkeeper.

With half an hour remaining, Tom Ward made his long-awaited return from a hamstring injury that had plagued him since November. He looked back to his best, tested to the full at one point when he was forced into a 30m sprint for the ball with one of the Etonian wide men. Fortunately, there were no ill-effects and he was able to complete the game without limitation.

With just under a quarter of an hour remaining a glimmer of hope arrived when the visitors did score their second. Lederman, who had come off the bench in place of his skipper, pinged a long ball down the left for David to run onto. He earned a corner off his full-back, Lederman delivered, and from the ensuing melee inside the box, Ward teed up Pablo Hutchinson to drive in from close range through a crowd of players.

Momentarily, spirits rose as an unlikely escape appeared possible, the Blues buzzing around in a desperate bid to win the ball back and pour forwards once more. But this optimism was brought to a sudden and juddering halt barely two minutes later when yet another corner resulted in another Etonian goal. This one was harder to defend, the ball drilled to the near post and a perfectly-executed flick header sending the ball flying past Pittalis on the inside. Nevertheless, to have conceded three times in similar fashion was galling, to say the least.

And the visitors were fortunate not to concede a fifth late on when Ed Massey bravely stuck his head in front of a fiercely-struck goalbound shot, deflecting the ball onto the post, the ricochet favouring the visitors.

The defeat leaves the Blues in third in Division Two and, worryingly, without a League win in five games, stretching all the way back to the start of November. Although the side played some decent football in patches, problems persist at both ends of the pitch. On this occasion, the wide open spaces of Mespots left the Blues’ attacking trio isolated and gave the midfield too much work to do to join attacks from deep. In defence, the lack of marking at the set-pieces was a fundamental flaw that will need eradicating immediately.

Next weekend’s Junior League Cup semi-final at home to the Old Columbans now becomes make-or-break for the 2s, against an opposition they have never faced before and know little about. The side have plenty of issues of their own to concentrate on for now, however.