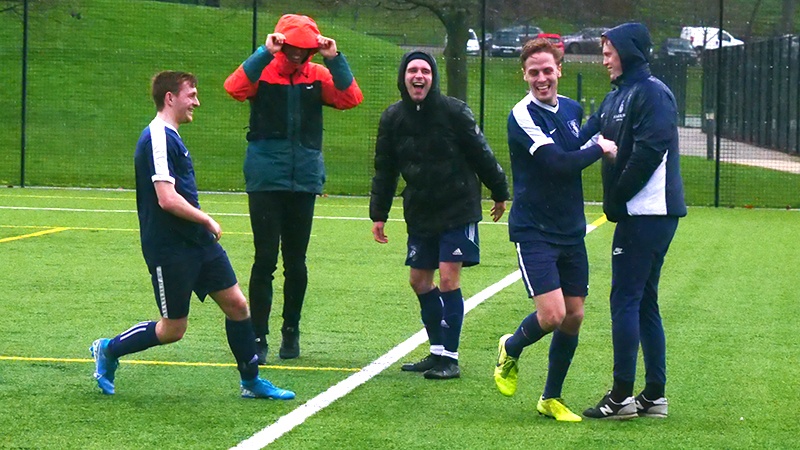 The OHAFC 1st XI secured Premier Division football for next season in some style, as they completed a deserved 3-1 win over the Old Etonians on the Harrow School astroturf on Saturday afternoon. Despite the awful climatic conditions, the Blues produced one of their best displays of the season, engineering a 2-0 lead at the break courtesy of a couple of superb goals from Alex Breeden, before sealing the win with a late effort from younger brother James. Despite the visitors pulling one back almost immediately, the Blues held on to record their first League win since the end of November and, in the process, reach the 20-point mark. The side are now mathematically safe from the drop, with their final game – away to KCS Wimbledon - due up next week.

Despite a rocky run of form that has seen the side collect just three points from their previous six games, the team deserve plenty of credit for finally achieving what must have been their aim at the start of the season: to secure another year in the top division of the Arthurian League following promotion at the end of last season. It is the first time since 2014 the OHAFC 1st XI have avoided an immediate return to Division One, and to do so with a conclusive victory over the Etonians adds an extra gloss to the achievement.

Although conditions in the first half were perhaps not quite as bad as feared, a stiff breeze blew across the astroturf towards Northwick Park Hospital, accompanied by a persistent drizzle, making conditions for the half a dozen or so spectators gathered on the touchline fairly unpleasant.

The two sides were well aware of each other’s threats having played out a highly competitive 1-1 draw at Eton College the week before. Whilst the Etonians had the better of that contest, they were under pressure in the opening exchanges here. Playing on their favoured artificial surface, the Blues looked sharp in possession and dangerous in attack, Alex Gilbert enjoying plenty of the ball on the right wing in particular. Several long crossfield passes from centre-half Kyle Barrett nearly set him free, the wind only adding to the Eton left-back’s problems.

James Breeden didn’t take long to showcase his exceptional dribbling ability, beating three men on the right before cutting the ball back but it was scrambled clear by the Eton defence. The visitors rarely threatened, but an early through-ball appeared to have set their pacy striker clean through, only for Jonny Lalude to make a superb sliding interception at full-stretch.

And the home side were rewarded for their fast start with the opening goal after a quarter of an hour. Both the Breeden brothers were involved. James carried the ball across the box looking for an opportunity to pull the trigger. His run was blocked by an Etonian, referee Julian Courtenay, not for the last time in the afternoon, waving away penalty appeals for handball. But the visitors were hesitant in clearing their lines and Alex Breeden pounced on the loose ball, cut in from the left past a couple of static opponents, before arrowing a pinpoint left-foot shot into the bottom corner from the edge of the box.

Not wanting to be outdone, younger brother James was quickly testing the Etonian keeper once more, this time hammering in a shot from the right, although the ball arrowed straight into the keeper’s midriff.

As the wind and rain increased in intensity, the Etonians’ mood steadily worsened as they felt several refereeing decisions go against them. Whilst Harrow’s attacking play lost some of its fluidity, the hosts still looked the more likely to score the next goal, although a number of forward passes were now being overhit and skipping harmlessly out of play off the greasy surface.

The rather fractious nature of the game continued for the remainder of the half, and with ten minutes to go until the break, things went from bad to worse for the visitors. A free-kick on the right side of the box allowed James Breeden to try his luck from twenty-five yards out. His effort was actually a poor one, directed straight at the heart of the Etonian wall, but the rebound favoured the hosts and he regained possession, picking out Jamie Jordache on the right wing. The full-back delivered a superb first-time cross to the far post where it was met with a thumping header from Alex Breeden, the ball flying back across goal and into the top corner off the underside of the bar. Surely one of the finest headed goals scored for the OHAFC in recent seasons.

With the scoreline firmly against them, the visitors then suffered a second setback moments later when an unnecessary row broke out over being allowed to make a substitution. Such was the Etonians’ mood that a sin-bin for back-chat was almost inevitable and Sam Baring was the one to finally break Julian Courtenay’s patience. Faced with playing the remainder of the half a man down, the Etonians never looked capable of mounting a comeback, and they trooped off the pitch at the break looking thoroughly miserable.

Nevertheless, such has been Harrow’s unfortunate penchant for conceding goals this season – 49 in 16 League games prior to this one – that nothing could be taken for granted, especially with the wind now blowing fiercely towards them.

And the opening ten minutes of the second half seemed to suggest that the result was far from a foregone conclusion, with the hosts failing to heed their own sensible half-time advice of taking no risks at the back. An early square ball played the defence into trouble and an air of mild panic steadily ensued as clearances were hacked up in the air, the ball drifting behind for a number of corners. Etonian confidence grew and they were again in the referee’s ear for a penalty, although on this occasion it was unclear exactly what the suggested offence was.

But to Harrow’s credit, they slowly regained their composure and began to force the play further and further from their goal. Jordache and Gilbert, playing on the right, were starved of possession, but on the left, with the wind carrying the ball in their direction, MacIntyre and Firoozan began to forge inroads, James Breeden was a constant menace to the Etonian defence and, most impressively of all, the midfield trio of Charlie Bick, Alex Breeden and Ed Beecham, continued to work relentlessly, seemingly taking it in turns to charge forwards and pressure their opponents into mistakes.

Gradually, the chances began to arrive once more. Hamish MacIntyre delivered an excellent curved pass around the centre-half for James Breeden to run onto, but having done the hard part and gone round the keeper, Harrow’s leading scorer was left frustrated as his left-foot shot was cleared off the line by a covering defender. Indeed, the striker’s efforts to grab his twentieth League goal of the season became the main sub-plot for much of the last half-hour, as he was foiled on numerous occasions by either the keeper, or the defenders or, on a couple of occasions, an unwillingness to pull the trigger early and instead take on one man too many.

At the other end, a rare Eton attack produced yet another vociferous penalty appeal, although this one appeared to have more merit, as a shot was clearly blocked by the arms of Kyle Barrett. Again, referee Courtenay remained steadfast in his refusal to accede to Etonian appeals and, predictably, this led to further rancour, with another visiting player sent to the sin-bin for overdoing the chat, following the award of a Harrow free-kick for what appeared a clear foul on McGuinness.

With a quarter of an hour remaining, the hosts seemed to have confirmed the win when another testing pass from left-back MacIntyre caused problems for the Eton keeper. He raced off his line to clear but was superbly closed down by Charlie Bick, with the result that the clearance was weak, low and, most importantly, straight to the feet of James Breeden. This time, the route to goal was clear and the striker duly delivered, firing in to an unguarded net from forty yards out to make it 3-0.

Whether or not complacency then set in is debatable, but almost within a minute the Etonians responded. Some hesitant defending from Harrow saw the Eton striker force an excellent save from McGuinness, but the ball fell perfectly for the rebound to be smashed in from close range.

Twelve minutes remained, but despite forcing a couple of corners, the visitors failed to produce anywhere near enough of a threat to suggest they could earn an unlikely point and the Blues held on without fuss to record an excellent win.

All twelve players used played their part in the victory, with even substitute Rollo Hovey, just back from a two-week holiday in Colombia, enjoying a productive half-hour run out at right-back, Jamie Jordache the unfortunate man to come off.

With Premier Division safety secured, the team can look forwards to next weekend’s season finale away to the KCS Wimbledon Old Boys before planning for their next campaign. The team have proved they belong in the top flight – do they have the ambition and commitment to take the next step and challenge once more for the top prizes in Arthurian League football?