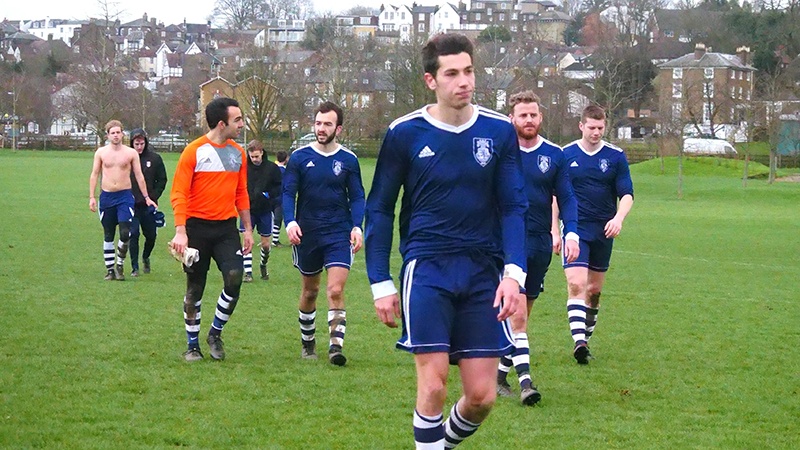 The OHAFC 2nd XI suffered heart-breaking defeat in their bid to reach this season’s Junior League Cup final whey they conceded the only goal of this semi-final two minutes from the end of extra-time against a feisty Old Columbans side on Harrow Hill on Saturday. The disappointment was even more acute after the Blues spurned several glorious chances to win the game in the 120 minutes. Columbans now go on to face tournament favourites the Old Carthusians 2nd XI in the final, Carthusians just about coming through their clash with another Division Three side, the Old Epsomians, winning 3-2 down in Tolworth. Harrow’s defeat ends any chance of the OHAFC collecting silverware this season.

In truth, despite their recent patchy form that has seen the Blues fail to win any of their last five League fixtures, there was little to reproach the team for on Saturday. In a tight, tense game, the blustery conditions and heavy pitch made it tricky for either side to exert themselves to any great extent over their opponents. The first half passed almost without incident, neither goalkeeper called into serious action. The second half saw the visitors produce the more cohesive football, aided by the wind blowing slightly at their backs, but the hosts carve out the better chances. And for much of extra-time the Blues appeared in the ascendency, coming within inches of taking the lead when a crashing drive from Max Curry cannoned off the underside of the crossbar. Columbans pressed in the closing minutes, but with time ticking down and neither side looking capable of scoring, a penalty shootout appeared inevitable. That was until a half-cleared corner produced a scramble on the edge of the Harrow box, a blocked shot fell perfectly into the path of a Columbans striker who planted the ball low into the far corner to send the visitors wild with delight.

From early on in this tie, a single goal always appeared likely to prove sufficient, with the sides evenly matched from the outset. The OHAFC, bidding to reach the final for the first time since 2012, utilised their customary 4-5-1 formation, with skipper Geoff Taunton-Collins enduring plenty of selection headaches in the days preceding the match. Eventually, he opted for continuity, with Doug Pratt and Gbeminiyi Soyinka – struggling with injury anyway – having been unavailable for most of the season and named on the bench. Ed Beecham could count himself more unlucky, especially having starred in the 1st XI’s superb win over the Old Etonians the previous week, but the starting midfield trio of Max Curry, Alexi Pittalis and David Lederman have been almost ever-present this season. Beech’s mood was not helped when, only ten minutes into the game, he was asked to go and stand on the far side of the pitch in order to collect any stray passes blown off course.

Indeed, the ball constantly flying off up towards the Hill was a constant feature of a fairly grim first half. In front of comfortably the largest crowd for an OHAFC game this season, there really was little to enjoy, with both teams struggling to create anything of note and goalmouth incident almost non-existent. Both sides possessed strong central strikers, fast wide players, competent ball players in midfield and well-organised defences. Understandably, especially given the conditions, this produced something of a stalemate. The half was perhaps summed up best by a tragi-comic moment just prior to the break: a long ball forwards from the Columbans caught the wind and flew over the heads of both Harrow centre-backs, Tom Ward and Harry Woolley, apparently sending the striker clean through on goal. But the striker, too, misjudged the bouncing ball, a poor first touch allowing the defence to recover and the chance was lost. The only conclusion to be drawn was that one set-piece, or mistake, or piece of brilliance would probably prove sufficient to separate the teams.

Thankfully, especially for those shivering on the touchline, things livened up considerably in the second half. The OHAFC, now playing with the strong breeze blowing towards left-back Will Monroe, were forced to reshuffle their pack early on when Tom Ward’s problematic hamstring again forced him off. Lederman, having enjoyed a far shorter rest than he had hoped for, was back on, with Beecham slotting into the midfield and Alexi Pittalis dropping back alongside Woolley in defence.

Columbans gradually began to enjoy the better of things, gaining control of the midfield courtesy of some excellent passing and movement. For the most part, the home side kept their opponents at arm’s length, although Kyri Pittalis was forced to make one excellent block, diving to his left to palm away a shot from one of the Columbans’ forwards who had broken clear on the edge of the box. The Blues continued to struggle to play with any conviction going forwards, the wind and lack of precision in the passing stifling the service to the front three. Kyri’s younger brother Alexi did force an outstanding save from the Columbans keeper, leaping highest at the far post to power a header towards goal, only for the ball to be spectacularly tipped over the bar.

Gbeminyi Soyinka, the OHAFC’s all-time leading scorer in this competition, replaced Pablo Hutchinson at centre-forward and he too found it hard-going against a well-marshalled Columbans back four. But with twenty minutes remaining, and little sign of a goal for the home side, ‘Bem’ spurned a glorious opportunity to win it when he was sent racing through the middle with just the keeper to beat. Disappointingly, the shot was dragged well wide of the far post.

The closing stages of normal time became somewhat fractious as both sides saw players booked by referee Tony Anderson. Harry Woolley used his years of experience to haul down a Columban as he hared towards the Harrow penalty area. Tristan David would later find himself on the receiving end of an even more cynical challenge in almost the identical place on the pitch in the first period of extra-time. And at the other end, there were some needless stoppages as players from both sides kicked the ball away in frustration following refereeing decisions. The Columban left-back was booked for refusing to go and collect the ball properly, whilst David was fortunate not to be sin-binned for a similar offence. In the end, the final whistle proved a welcome interruption for both the players and officials.

Playing once more with the wind slightly behind them, the OHAFC played with renewed vigour for the first period of extra-time, appearing the fresher side. Now, play was concentrated in the Columban half, with Tristan David, when not being hacked down maliciously, providing width down the left and Pablo Hutchinson, back on in place of younger brother Andy, down the right. He was aided by his skipper, with Geoff Taunton-Collins competing ferociously throughout the ninety minutes, as well as providing his customary sporadic gallops down the wing.

The hosts produced two golden chances to earn the win. A well-worked move down the left saw the ball passed inside to Max Curry in space. As he cut in, he ignored options square and instead unleashed a crashing drive that flew past the keeper but hammered against the underside of the crossbar before bouncing clear. Then, after the interval, Andres Hutchinson raced clear down the inside right channel. As the keeper came out to dive at his feet, the forward dinked the ball over him and watched on as it rolled agonisingly slowly towards the goal. Unfortunately, a last-ditch dive from a Columban defender proved just in time, the ball scrambled clear just before it crossed the line.

The hosts would soon rue their luck. The visitors pressed in the closing minutes, playing deeper and deeper into Harrow territory. Several long shots proved little threat to the Harrow goal, but Pittalis was again called into action to palm out a close-range effort that looked destined for the back of the net. Fortunately the rebound fell safely and was hacked clear.

With time nearly up and penalties looming large, the game was suddenly, cruelly snatched from Harrow hands when a corner was only partially cleared out to the right wing. The ball was worked back inside and although the initial effort was blocked by a combination of Pratt and Woolley, it fell perfectly into the path of another Columban, on the penalty spot, with just the keeper to beat. He made no mistake, firing the ball low past Pittalis into the far corner.

The hosts had no choice but to send everyone upfield from the kick-off, but the long punt forwards was headed clear and thirty seconds later the final whistle blew, Cup dreams over for another season. Congratulations to the Columbans, who proved worthy opponents on the day. Commiserations to the OHAFC, who gave everything and came within inches of claiming the win. The Blues must now focus on their final five League matches, with the carrot of a second-place finish in Division Two still dangling in front of them.