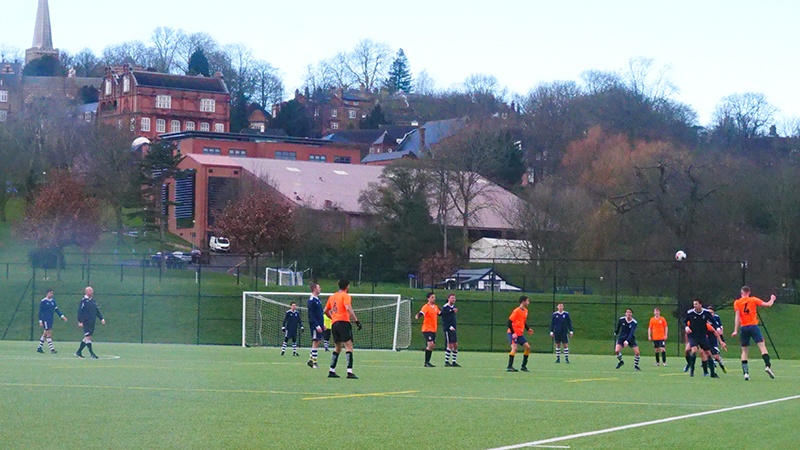 The OHAFC 2nd XI finally returned to winning ways in the Arthurian League with an excellent 4-2 victory over the improving Old Aldenhamians on the Harrow School astroturf on Saturday morning. In a game played in the full spectrum of weather conditions possible, from bright sunshine to driving hail and everything else in between, the hosts fell behind midway through the first half but rallied in a dominant spell either side of half-time. Andres Hutchinson took advantage of two through-balls from David Lederman and one from Kyle Barrett to race through and complete a swift hat-trick and, despite the visitors pulling a goal back with a touch of good fortune, the points were made safe fifteen minutes from time when Lederman scored a fine free-kick, curling the ball over the wall and inside the near post. The win ensures the Blues will finish above their opponents in the table.

With persistent rain falling throughout the week, it was unsurprising that the Phil pitches were once again deemed too wet to play on. With the school astroturf only available for a single OHAFC game, the 3s’ fixture against Salopians was postponed, enabling 2s skipper Geoff Taunton-Collins to add Michael Brooks and Freddie Everett to his squad – the latter making his 2nd XI debut. There was also a warm welcome back for former 2s regular Jack Robinson, whose recent travels around the globe had put his OHAFC career on hold temporarily. And Charlie Bick and Kyle Barrett ensured they completed the full house of appearing for all three Saturday OHAFC teams this season, joining a select group including just four other players (Hovey, Jordache, Lederman & Mitchell). Brooks, Everett and Robinson started on the bench, with Doug Pratt lining up at left-back, Will Monroe at right-back and Geoff Taunton-Collins pushing himself further forwards into midfield.

Although the Blues won fairly comfortably away to the Aldenhamians early in the season, recording a 3-1 victory at the end of September, this promised to be a very different affair, both on and off the pitch. The visitors’ form had picked up markedly in recent weeks, to the extent that early relegation worries had been extinguished and a top-three finish was now in their sights. The conditions also promised to be rather more testing, with the warm September sunshine a distant memory. Despite the teams warming up under clear blue skies, ominous dark grey clouds were soon looming in the distance, the wind beginning to pick up just as the game got underway.

The Blues made a bright start to proceedings, dominating possession albeit deep inside their own half. Aldenhamians offered little in an attacking sense, but were well marshalled at the back, preventing the front three of the two Hutchinson brothers and Taunton-Collins from making much progress going forwards. Indeed, it proved something of a frustrating opening half an hour for the hosts, who were unable to break their opponents down. Will Monroe enjoyed plenty of space at right-back and Charlie Bick was constantly collecting the ball off the centre-halves, but moving forwards from there proved problematic.

In fact, the best chance of the opening half hour fell to the visitors, a direct pass played out to the left set the winger free to cut inside but his attempted chip was weak and straight into the grateful arms of Kyri Pittalis. The Harrow keeper was then involved in a rather unsavoury incident when he was needlessly clipped by the Aldenham striker attempting to collect an overhit through-ball. Pittalis stayed down for several minutes to recover from the collision, but the damage had already been done, with players from both sides now involved in a war of words that was to last pretty much until the final whistle. Arthurian League Chairman Will Hoyle did his best to calm things down, but further trouble soon flared when a disputed throw-in down by the corner flag led to some needless arguments. The Aldenham substitute, who had been their best player in the first meeting between the teams back in September, and Kyle Barrett held the game up for several minutes as the two captains were called together and warned as to their sides’ conduct.

Once play restarted, the Blues continued to struggle to create any chances of note, with the Aldenham keeper remaining untested. A foul on the edge of the box presented the hosts with an excellent opportunity to at least get a shot on target, but Charlie Bick’s attempted curler around the wall was well wide.

And soon afterwards the visitors took the lead from an almost identical situation to their earlier attack. Again, a long ball forwards down the inside left channel caused undue problems at the back for Harrow. Kyle Barrett was beaten to the ball by the striker and this time he held his nerve to produce an inch-perfect chip over Pittalis from the corner of the penalty area.

At this stage, things looked fairly bleak for the home side, but their fortunes changed drastically in the twenty minutes either side of half-time as they suddenly rediscovered their attacking prowess to devastating effect. The first goal came from almost nothing as an innocuous throw-in inside the Harrow half saw Andres Hutchinson play the ball square to Lederman. His first-time return pass down the line caught the Aldenham defence napping, however, and Hutchinson raced onto it, out-stripping his full-back and driving into the box. With his skipper demanding a square pass as one of the centre-halves tried to cover, the winger kept his head down and drove the ball past the keeper and just inside the far post. A minute later the half-time whistle blew and, somewhat surprisingly, the sides went in level at the break.

The Harrow skipper sent the same eleven out for the start of the second half and this proved a wise decision as the Blues ran riot in the fifteen minutes after the break. Twice the Aldenhamians were caught too square and too high up the pitch, Hutchinson, by now playing with confidence coursing through his veins, making them pay on each occasion. A few minutes into the half Lederman found himself with time on the ball midway inside the Harrow half and again he produced a decisive pass, splitting the centre-halves and inviting the left-winger to run through on goal. Harrow’s leading scorer made no mistake, coolly planting the ball past the Aldenham keeper to give the Blues the lead. The third, some seven or eight minutes later, was an even better goal, the move starting deep inside the Harrow penalty area. Woolley and Barrett snuffed out an Aldenham attack, the latter playing a calm one-two with Lederman on the right before producing a superb first-time pass forwards that curled beyond the Aldenham defence. This time Hutchinson had rather more to do, but again he showed superb pace and composure to drive beyond the defenders, carry the ball into the box and produce another sublime finish.

The Blues were flying, the side looking far more confident going forwards with greater movement across the pitch. The skipper removed himself from the fray, allowing Freddie Everett his first taste of 2nd XI football, and he slotted right in, producing several driving runs down the right, one of which ended with a powerful shot across goal that the keeper did well to save.

At this stage, with twenty-five minutes remaining, the hosts appeared well set to go on and cruise to victory. But they were halted in their tracks, almost literally, by an extraordinarily sudden and dramatic change in the weather conditions: a hail storm, accompanied by strong winds, suddenly engulfed the Hill, forcing players and spectators alike to seek refuge in the dugouts next to the adjoining astroturf. Slightly sheepishly, the players remained there for at least five minutes until the worst of the storm passed, although it was still miserable when the game resumed.

And things deteriorated further still for the hosts when the Aldenhamians pulled a goal back from a highly improbable situation. A ball down the inside right channel looked to present little imminent danger, with several Harrow defenders in attendance. But hesitation then followed, the defence froze and the Aldenham striker nipped in, prodding the ball against a Harrovian leg to send it looping up and over Pittalis before it bounced down and just inside the near post. A really poor goal to concede from a Harrow perspective.

But before the visitors could entertain serious thoughts of a comeback, they fell two behind once more courtesy of yet another storming run through the middle by Andres Hutchinson. Racing clear down the middle, he was a yard short of the penalty area when a crude lunge from behind stopped him in his tracks. The defender was shown a yellow card that could quite easily have been red, but the damage to the Harrow player was of greater concern: he was forced to limp off the pitch supported by his brother with stud marks showing just above his ankle. It is unclear how long he will now be out of action for, the hope being that there is no ligament damage.

Fortunately, the offence was then punished further still when Lederman stepped up to curl the ball over the wall and just inside the near post, the Aldenham keeper scrambling across his goal but unable to reach it despite a despairing dive. With a quarter of an hour remaining, the goalscorer was withdrawn and Jack Robinson and Michael Brooks given some playing time. The Blues played out the remainder of the game in relative comfort, a couple of long-range efforts failing to test the Harrow keeper, as the rain continued to fall and the wind continued to gust.

It was an excellent win for the home side, their first in the League since early November, and the team can now look forwards to their final four games of the season with confidence, beginning with the small matter of the trip to Charterhouse next weekend. A second-place finish in the division is still very much up for grabs.