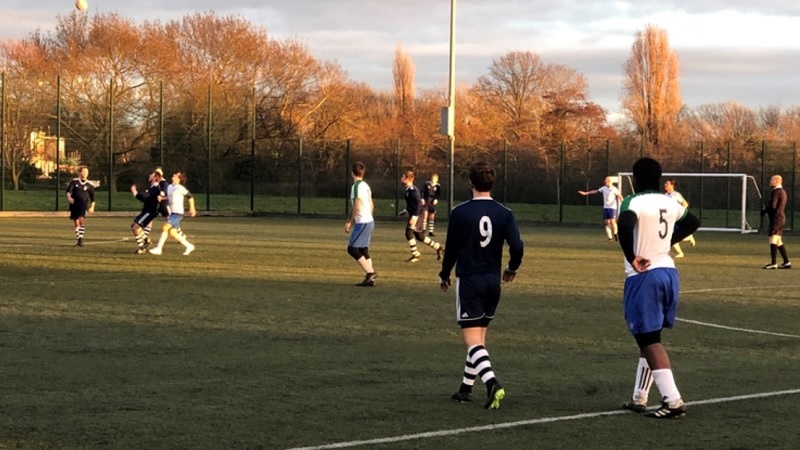 The OHAFC 2nd XI returned to action after just a week-long break over the Christmas period but, unfortunately, the festivities failed to engender a change in their recent fortunes as yet another slew of chances were missed in a disappointing 3-1 defeat away to the Old Rugbeians on the astroturf in Twickenham.

As was the case against the Old Carthusians a fortnight previously, the Blues could conceivably have been two or three goals to the good before their opponents struck, and, once more, further missed opportunities followed after the break. The side did, at least, manage to score their first goal in four games, but the 3-1 defeat leaves the OHAFC 2s in danger of spoiling their superb start to the season, with the Carthusian 2s now disappearing over the horizon at the top of Division Two.

Despite the quick turnaround following Christmas, the 2s squad remained committed to the cause with thirteen players making themselves available for the short trip to Lincoln Field 3G in Witton. Kyri Pittalis returned in goal, Harry Woolley returned from his recent rib injury and Doug Pratt partnered him at the back, making his first 2nd XI start of the season. Jack Alhadeff also started for the side for the first time this campaign in what, sadly, is likely to be his final appearance for the team until next autumn – San Francisco proving a more glamorous location in which to ‘play ball’. The subs bench also provided some new faces, with Jack Dolbey making only his fourth League appearance of the season and Jesse Duah his second. There was also a new face in the middle, with Mike Sainsbury officiating his first ever OHAFC fixture.

With little breeze of note, conditions in Witton were fine, although, as ever at this particular venue, the low setting sun behind one end would prove troublesome the longer the game wore on. The Blues played with the sun at their backs for the first half and showed little signs of rustiness from the week off. A fairly even start to proceedings slowly saw the visitors take control, with the front three of Alhadeff, David and Pablo Hutchinson all threatening. Frustratingly, the final ball was the only thing lacking on several occasions as threatening moves were built only to founder at the vital moment.

And frustrations grew as the visitors hit the woodwork twice in quick succession. A sweeping move down the left saw Alhadeff drive the ball against the near post before Hutchinson attempted an even more outrageous attempt from the right, his cross-shot from thirty yards out sailing over the keeper but cannoning off the underside of the bar and cleared to safety.

Indeed, the similarities with the defeat to Carthusians prior to Christmas were startling, with the OHAFC again conceding when they appeared almost certain to score themselves. This time, however, the visitors had only themselves to blame for two poor goals they gifted the Rugbeians. A corner was curled beyond the far post and a volleyed shot ricocheted into the net off Lederman, who was powerless to react in time. Shortly afterwards, with the hosts threatening once more down their right, Harrow were the authors of their own downfall as they dallied when trying to clear, Rugbeians taking advantage to rob Tristan David on the edge of the box before squaring for a simple finish from close range.

And, as in the Charterhouse fixture, the latter stages of the half belonged to the opposition, with Kyri Pittalis keeping the Blues barely in touch with several superb saves, notably foiling a one-on-one with a swish of his right boot before flinging himself to his right to palm a shot that was destined for the bottom corner just past the post – one of the saves of the season.

Half-time saw Jack Dolbey introduced, with Tristan David and Alexi Pittalis rotating on the side. And the substitute immediately brought a bite to Harrow’s midfield play with several excellent tackles and some efficient use of the ball. Once more the Blues found themselves on the front foot and for the twenty-five minutes following the interval the visitors dominated, camped inside the Rugby half.

Following 336 minutes without a League goal, the Blues finally ended their drought courtesy of a set-piece, Ollie Curry crossing for Alhadeff to score with a glancing header at the near post. With all to play for, the visitors pressed forwards relentlessly and could, and should, have scored again from two superb crosses from the right wing: a wonderful move of intricate, slick passing ended with Taunton-Collins crossing to the far post only for Hutchinson to head just over the bar, before Hutchinson himself delivered another perfect ball across goal, this time Alhadeff firing agonisingly wide of the near post under pressure from a defender.

But as the sun dipped and the shadows lengthened, time began to run out in the visitors’ bid to regain parity and Rugbeians took advantage of some tiring limbs in the closing stages to seal the win, an excellent finish from a midfielder who dragged the ball onto his left side before firing past Pittalis with power and accuracy.

The hard-luck tales continue, then, for the Blues, who must wonder how their goalscoring touch has deserted them so suddenly and so drastically. Once again, sufficient chances were created to score three or four goals, but to have to settle for a solitary header from a corner was dispiriting. The Division Two title is now out of their hands, although the Junior League Cup once more returns next weekend so focus must now switch to that, with all eight second round ties taking place. The 2s will hope their luck in front of goal changes against Division Three also-rans Lancing 2s.