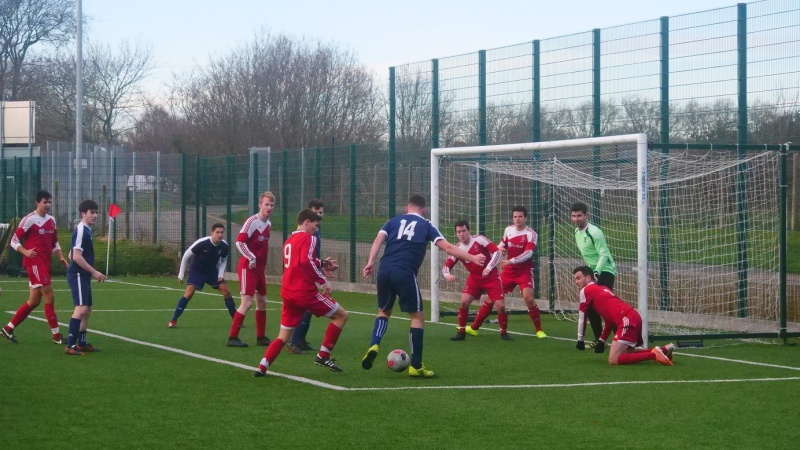 For the second time this season, the OHAFC 1st XI battled to a somewhat scrappy 1-1 draw with the Old Salopians and, just as in the home fixture back in November, had to rely on a penalty to gain a share of the spoils, James Tippett converting after Doug Morrison had been fouled inside the box.

The draw does little to help either side, although from Harrow’s perspective it does at least retain their ten-point gap to the bottom two sides, with time running out for the Salopians and Chigwellians to haul themselves out of the relegation zone.

Whilst conditions for this contest on the astroturf in Chiswick were a far cry from the horrendous wind and rain that accompanied the sides on the Hill back in November, there was, nevertheless, a strong breeze blowing down the pitch that made getting the ball down and playing for lengthy periods inordinately tricky.

The visitors, shorn of several regulars, including leading scorer James Breeden, started brightly, Cyprian Owen Edmunds trying his luck from over thirty yards out barely a minute into the game. But as the first half wore on, it became clear that there was little to separate the two teams and it was going to take a moment of brilliance – or a calamitous error – to settle matters.

Indeed, neither keeper was unduly tested in a first forty-five minutes high on endeavour and spirit but low on quality and, for those watching on from the sides, there was little by way of goalmouth excitement. Ciaran Jordan, who was making his first appearance of the season at right-back, was forced off on the half-hour with a knee injury, Callum Barrett replacing him. But the Harrow back four, bolstered by the experience of 43 year-old Paul Molloy (also playing his first game of the season), coped well with any Salopian threat, the hosts’ left winger appearing the most likely source of a goal.

Going forwards, the front three of Tippett, Morrison and Owen Edmunds struggled to link up cohesively, with the result that too many attacks broke down in one-on-one situations, the forwards unable to bring their teammates into the game. The midfield three of Dan Firoozan, Charlie Bick and Will Swan – another making his debut appearance this season – battled hard, but the intensity of the contest and the tricky conditions prevented either side from enjoying a period of dominance.

The second half saw the Salopians threaten first, working the ball down both flanks effectively. The closest the hosts came to scoring was courtesy of header from a far post cross, McGuinness scrambling across the line to prevent the ball from crossing the line.

Indeed, as the game wore on, spaces began to open up at both ends of the pitch and Harrow threatened too, Tippett the chief creator as he produced several weaving runs that could have led to more. But, as was always likely in such a closely-fought encounter, it took a moment of misfortune to break the deadlock. Harrow skipper McGuinness went to fetch a ball that had run out of play for a Salopian throw-in, only for the game to continue using another ball. The visitors had, understandably, allowed their concentration to drop momentarily and they scrambled back to foil the hosts’ attack at the expense of a corner. Molloy cleared the initial effort off the line, but could only scoop the ball straight up into the air, and with McGuinness hampered by the setting sun, a Salopian pounced to head home from six yards out.

If the visitors thought they had been harshly treated in that spell of play, they were soon counting their blessings as a second Salops goal was generously ruled out for offside by the referee following a few token appeals. The hosts broke down the left side of the Harrow box, the ball was squared across goal and tapped in, before the match official adjudged the striker to have been ahead of play when the final pass was made.

The visitors switched to a more attacking formation as time ticked on, Doug Morrison joining Tippett up front in a standard 4-4-2 in a bid to force an equaliser. And the change worked, with the Blues earning themselves a penalty with just under a quarter of an hour remaining: an intricate move ended with the ball being played over the top for Morrison to run onto, he nicked the ball past the onrushing keeper and fell to the ground under the challenge, the referee immediately pointing to the spot. James Tippett, under immense pressure given the circumstances, held his nerve to convert and level the score at 1-1.

Both sides pressed in the closing stages, desperate for all three points. Salops forced a corner on the right and subsequently had three or four efforts at goal that were repelled by a combination of keeper and defenders. As tempers rose late on, it was the hosts’ turn to sweat, as they were reduced to ten men following a sin-binning for dissent. Despite the numerical advantage, the Blues failed to open up their opponents sufficiently, both sides once more forced to settle for a point apiece.

The OHAFC climb one place to sixth in the Premier Division table, but have played at least two games more than all the sides below them in the table. The team have an excellent chance to banish any lingering threat of relegation when bottom side the Old Chigwellians visit the Hill next weekend: Chigs have lost all ten League games played this season and were comfortably beaten 5-1 by the Blues early in the season. A similar result should see the Blues confirmed as a Premier Division side next season.