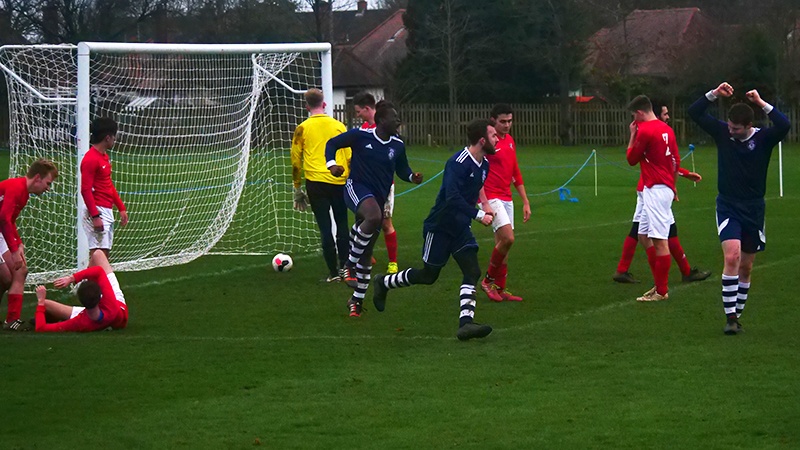 The OHAFC 2nd XI scraped into the quarter-finals of the Junior League Cup on Saturday afternoon courtesy of a penalty shootout win over Lancing’s second string. In tricky conditions on the Hill, the two sides battled to a 1-1 draw after ninety minutes, the visitors striking first with a superb long-range effort from their skipper, before a fine header from midfielder Alexi Pittalis deservedly sent the tie to a shootout. There, the hosts displayed far greater confidence than their opponents, firing in all four of their efforts, whilst Lancing missed twice. The draw for the next round has yet to take place.

The victory, whilst far from convincing, was nonetheless fully deserved as the Blues, who currently sit second in Division Two, were the better side for much of Saturday’s tie. Given their lowly League position at the foot of Division Three, Lancing proved surprisingly obdurate opponents, sitting deep and frustrating the Harrow attack for long spells. But going forwards they offered little and, as the game developed, the key question was could the hosts force the breakthrough.

They had two excellent chances before the break, both falling to all-time leading scorer Gbeminiyi Soyinka. The first saw the ball played across the box towards the far post, the striker’s volley back across goal well blocked by the Lancing keeper. But the second opportunity was the one that should have been taken. A hopeful long ball out of defence caught the visitors’ defence napping on the halfway line and Soyinka raced through with just the keeper to beat. His shot was low and true but agonisingly only found the foot of the post, the ball rebounding wide for a goal kick.

The final play of the first half saw some excellent vision from Ollie Curry, who dextrously carried the ball across the face of the penalty area only to cross back to the opposite side of goal – Pablo Hutchinson’s despairing lunge was inches short of making a connection.

With both Harrow’s substitutes struggling with illness and injury, the starting eleven – including promising debutant Ed Stewart in midfield – had to battle on. And, unfortunately, the second half turned into something of a war of attrition. The strong wind blowing across the Phil made getting the ball down and play tricky, and although the Blues strung together some decent passages of play, creating clear-cut opportunities proved an uphill struggle.

With twenty minutes remaining, and keeper Walsh having barely had a save to make, the Lancing skipper collected the ball in the middle of the Harrow half, looked up, and casually struck home from thirty yards out, the ball sailing over the Harrow keeper into the top corner.

As the clock ticked on, Harrow frustrations grew, Alexi Pittalis booked as he fouled once too often. But the Harrow man had every right to feel aggrieved with ten minutes remaining when he was spectacularly upended inside the Lancing penalty area only for referee Peter Dace to resolutely ignore frantic Harrow appeals. Collecting the ball with his back to goal, Pittalis nicked it past a defender who barged into him, sending the Harrovian flying into the air. Everyone turned to look at the official expectantly but no whistle was forthcoming and the game continued, to mild astonishment.

Fortunately, from a Harrovian perspective at least, it was Pittalis who had the last laugh, producing a superb flick header from a corner with five minutes remaining to send the tie to penalties. Moments before, keeper Charlie Walsh had produced an excellent diving stop to keep the deficit down to just a single goal – the two players combining to keep Harrow in the Cup.

With the light fading badly, extra-time would have been impossible and so the tie proceeded straight to a shootout – the Harrow 2s’ first experience of a shootout since a first round win over Westminster 2s in January 2016.

And history was to repeat itself as the Blues once more earned a comfortable 4-1 win in the shootout. Lancing took first but Charlie Walsh produced a fine diving save to his left. Andres Hutchinson confidently fired home Harrow’s first effort and the home side never looked back after that, Pablo Hutchinson and Ed Beecham both finishing comfortably. A third Lancing miss meant the tie was over and the two sides began shaking hands and leaving the field, only for the referee to insist the spot-kick be re-taken, Walsh having come off his line fractionally early. This seemed somewhat pedantic, if technically correct by the letter of the law, given the Lancing effort had been fired high and wide, but the shootout duly continued, the Lancing player scoring at the second attempt. Will Monroe stepped forwards and finished things once and for all, his immaculate penalty crowning another excellent performance from one of Harrow’s in-form players.

The Blues have now reached the quarter-finals of the Junior League Cup in nine of the last ten seasons, but they have only progressed to the semis twice since the consecutive finals reached in 2011 and 2012. Indeed, their previous four quarter-final exits have seen the Blues lose by an aggregate score of 16-1. With several excellent sides left in the draw, there will be no easy games from now on.