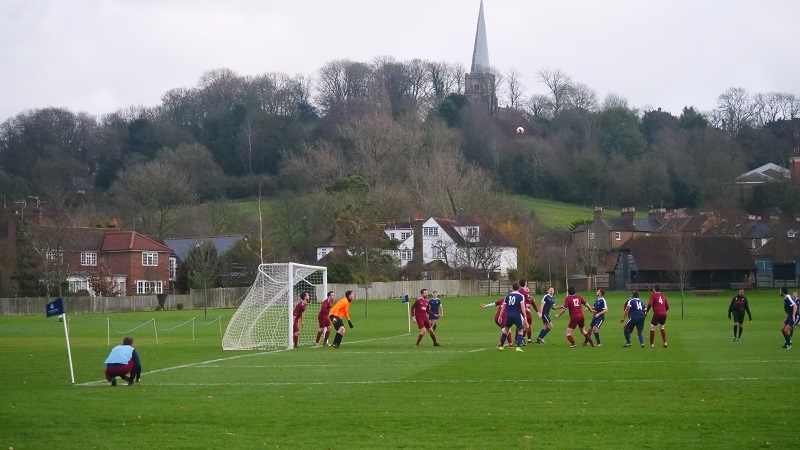 The OHAFC 1st XI produced arguably their worst performance of the season on Saturday afternoon, falling to a humiliating 4-1 defeat at home to the previously winless Old Chigwellians. James Breeden’s goal just prior to the break proved the only ray of light on an otherwise dark day for the side, whose final five games of the season all come against sides in the top half of the table. Despite a relatively healthy gap of ten points to the bottom two teams, the Blues’ recent form means they now have plenty of work to do to ensure a respectable end to their first season back in the top flight since earning promotion.

Despite welcoming back leading scorer James Breeden for his first League appearance since the 6-4 victory over the Bradfieldians on November 30th, and Freddie Brunt for his first appearance of the season during a brief stay back from Mozambique, the home side never got going and found themselves 2-0 down inside half an hour.

Despite Chigs playing into a strong wind they were afforded far too much time on the ball and took full advantage: some intricate play on the edge of the Harrow box culminated in a clever angled through-ball that picked out an attacker at the far post, the ball was finished adroitly past McGuinness into the far corner; shortly afterwards the visitors doubled their lead, again their midfield was allowed far too much time on the ball and a chipped pass over Hamish MacIntyre, who was filling in at centre-half, allowed another attacker to run through and beat the Harrow skipper inside his near post.

To Harrow’s credit, they rallied in the minutes leading up to the break and were rewarded for their improved showing with a goal just prior to the interval, James Breeden breaking the offside trap to run through and impudently chip the keeper with a delightful finish.

With just a single goal separating the sides there was all to play for in the second half, but once more it was the visitors in the ascendency, using the wind to their advantage to pin the hosts back inside their own half. Try as they might, the home side just couldn’t get going, their play lacking any semblance of fluidity.

The third Chigwellian goal was simple enough in its execution, a ball down the left bypassing the Harrow midfield, crossed into the box and finished at the far post. Harrow heads dropped somewhat, as the prospect of becoming the first side in the Premier Division to drop points against the Chigwellians this season grew ever stronger. The Blues did pick themselves up eventually, creating a few half-chances they were unable to convert.

But a fourth for Chigwell late on sealed the points, another ball over the top allowing the striker a clean run on goal and he dummied McGuinness expertly before rolling in to spark jubilant scenes of celebration.

Understandably, there was a rather different reaction from the Harrow players come the final whistle. The side have now taken just a solitary point from fixtures against the two bottom sides in the League and with five games remaining, all against teams currently residing in the top half of the table, the pressure is on to put together a strong run to end the campaign. The fightback begins with a home game against the Old Tonbridgians next weekend. The Blues enjoyed a 1-0 lead until late on in the return fixture down in Kent, before a late red card for Cyprian Owen Edmunds turned the game on its head. The side could do with their own slice of luck this time around.

*Thanks to skipper Fraser McGuinness for his assistance with this report