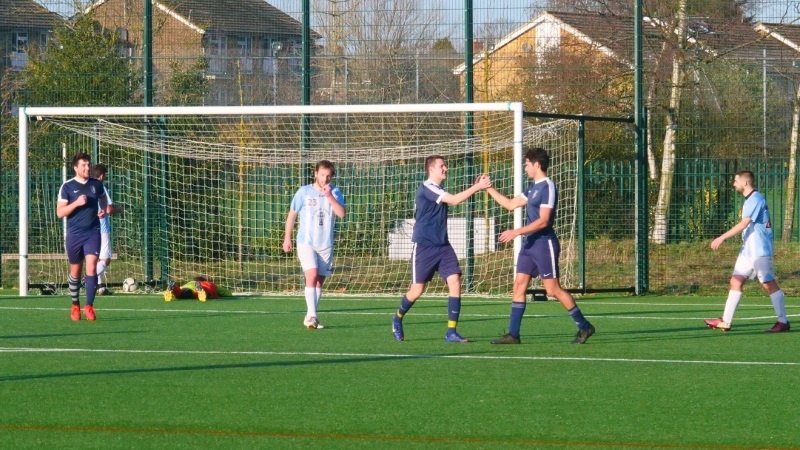 The OHAFC 3rd XI produced one of their best performances of the season on Saturday afternoon, gaining revenge for the 3-0 defeat suffered at the hands of the Old Shirburnians prior to Christmas with a 2-1 win over the same opponents on the Hampton Sports Centre astroturf. First-half goals from Ed Stewart and Freddie Everett were sufficient for the Blues to claim their third League win of the campaign, despite a late rally from the hosts, who pulled a goal back with ten minutes remaining and pressed for an equaliser in the closing stages. The 3s remain in sixth place in Division Four with four games remaining.

Conditions in southwest London were ideal for a rare 2pm KO, with barely any wind to speak of, although the low sun behind the sports centre end caused both sides problems when playing towards it.

With an outside chance of a late challenge for one of the promotion places and the memory of a relatively comfortable 3-0 win over the Blues before Christmas, the Shirburnians could have been forgiven for thinking that the game was theirs for the taking. But a competitive opening period showed that there was little to choose between the sides. The visitors looked secure at the back, with Tritton and Woolley shepherding several long balls back to debutant Lo in goal, whilst Freddie Everett looked lively up front, ably supported by Ed Stewart in midfield, whose languid, skilful control of the ball with his left foot stood out against the frenetic nature of much of the rest of the game.

And it was two Harrow midfielders who combined for the opening goal, just after a quarter of an hour. Will Monroe, who was his usual busy self in the middle, whipped in a free-kick from the left wing and Stewart rose to flick the ball in at the near post with a glancing header, the Harrow man left unmarked by a static Shirburnian defence.

He continued to provide several driving runs through the middle of the pitch, often beating two or three defenders with a flick of his foot, but on each occasion there was a reluctance to shoot when in sight of goal – the result being that the ball was eventually lost on the edge of the box and the attack breaking down. Nevertheless, the Harrow midfield continued to flourish, with Monroe and Cullimore enjoying plenty of possession and some neat interchanges resulting.

The home side had offered little by way of a goal threat, a couple of corners notwithstanding, but just after the half-hour they came mightily close to levelling the scores. Only a superb diving stop from debutant Lo kept out the initial shot before an equally athletic, and brave, block from right-back Michael Brooks prevented the rebound from arrowing in on target. The resulting corner was cleared and the visitors survived.

And they put themselves firmly in the driving seat shortly before the break courtesy of a trademark driving run down the right by Geoff Taunton-Collins, well picked out by Stewart, who cut the ball back to the penalty spot for Everett to deliver a low first-time shot on goal. In truth, the Shirburnians goalkeeper made an absolute hash of the attempted save, firstly trying to kick the ball away with his feet, before proving unable to grab it with his hands at the second attempt as it rolled slowly over the line. The look of disappointment on the defenders’ faces told the story.

Skipper Tritton, aided by Woolley, continued to revolve the playing eleven at half-time and beyond, with the three substitutes all introduced and given plenty of minutes. But the visitors were given an almighty scare at the start of the half when they came within inches of conceding. Pleas for handball against a Shirburnian forward were ignored and the hosts piled forwards, the Blues finally scrambling the ball clear off the line.

Disappointingly, the second half provided only sporadic further goalmouth excitement, with both sides struggling to gain the upper hand in midfield. Everett, despite continuing to probe the channels, was well marshalled by the Shirburn centre-halves and he was often crowded out when trying to work an opening. Stewart continued to weave his mesmerising patterns in midfield, but again there was a lack of an end product, despite some half-time encouragement to let fly if he found himself in sight of goal.

The Blues did fashion one superb chance to put the game beyond the hosts’ reach when Taunton-Collins collected a loose ball in midfield and raced through on goal. The back four were never going to catch up with one of the quickest OHAFC players, so it was all about the finish – disappointingly, he opened his body but placed the ball inches wide of the far post. The Blues then came even closer to putting the result beyond doubt when Will Monroe curled a free-kick against the crossbar from wide on the left – the post-game assurance that it was a shot and not a cross sounded less than totally convincing.

And the visitors could have been made to pay for their misses when Shirburnians pulled a goal back with ten minutes remaining. Similar in nature to Harrow’s second, the move emanated down the right wing, a forward carried it round the stranded Lo before squaring for a teammate to tuck into an empty net.

The hosts gradually built a head of steam in the final minutes, but were rarely able to create further clear-cut chances and the OHAFC held on for a vital win in their quest to ensure they stay in Division Four come the end of the season. It was an excellent performance from the Blues, with all fourteen players contributing to the win, and should give the squad hope going into the final four games of the season, starting with the visit of the Old King’s Scholars to the Hill next Saturday.