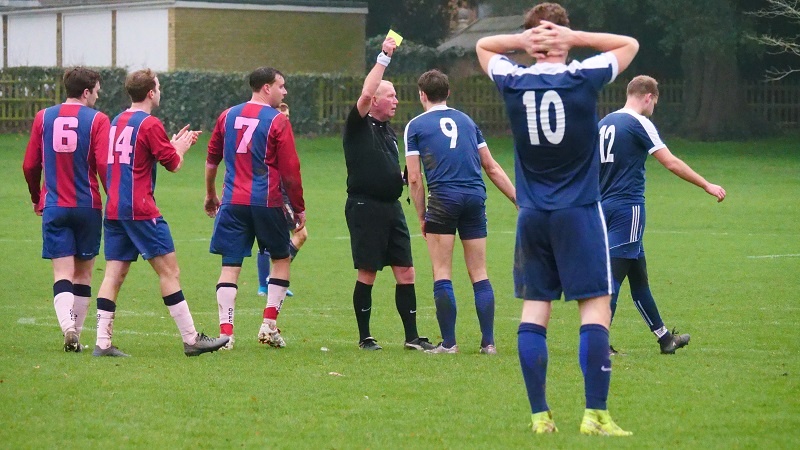 For an hour of this highly competitive Arthurian League Premier Division encounter it was difficult to distinguish between the side that has won fifteen League and Cup competitions over the past decade and the side playing their first season of top flight football in three years. At 2-2 with half an hour remaining, all results looked possible, League leaders the Old Carthusians looking distinctly rattled having just lost a lead for the second time in the game. But in the space of just a few minutes the match swung decisively in the visitors’ favour, the OHAFC conceding a third goal before being reduced to ten men moments later when Alex Gilbert was shown a second yellow card for a late tackle in the middle of the pitch. Unsurprisingly, with a man advantage the visitors suffered little further alarm in the closing stages and eased away to a 5-2 victory that maintains their advantage over KCS Wimbledon Old Boys at the top of the table.

Once again, it was a case of what might have been for the OHAFC. Last Saturday the side fought back superbly on the school astroturf to lead 3-2 and 4-3 at home to the Old Tonbridgians, only to concede a late penalty and have to settle for a point. On this occasion, playing on a rather stodgy Phil Pitch 1 that has barely recovered from the recent heavy rainfall, the Blues again made a sluggish start, falling behind in the seventh minute to a magnificent Charterhouse goal. But for the twenty minutes prior to half-time and the quarter of an hour afterwards, prior to the sending off, the hosts more than held their own, looking capable of pushing their opponents all the way.

The Blues again benefitted from the 2nd XI not having a game, with skipper Fraser McGuinness once more utilising a number of second string players. Pablo Hutchinson kept his place up front from the week before, as did Ed Beecham at the back. Ollie Curry made his first appearance for the side this season, starting on the right, with Alex Gilbert on the left. Alex Breeden’s late confirmation that he was available provided a welcome boost in midfield, with younger brother James looking to hit the twenty-goal mark for the 1s for the third consecutive season – he missed a penalty in the return fixture at Charterhouse earlier in the season when the Blues came away disappointed following a rather undeserved 3-1 defeat.

But the opening twenty minutes of this game, played under grey skies throughout, suggested yet another tough afternoon in store for the men in blue. Having lost the previous eleven meetings against the Carthusians, and with only a solitary League victory since early October, a fast start from the OHAFC was required. Instead, the visitors settled immediately, passing the ball with authority across the pitch. They earned a couple of early corners which the hosts defended well, but there was no stopping the move the Carthusians conjured seven minutes in. The ball was swept out to the left wing from the middle of the pitch. Instant control from the left winger was followed by a cross swept to the edge of the area. Jamie Cameron timed his run perfectly, controlling the cross before curling the ball powerfully into the far corner of the net from twenty yards out, McGuinness unable to get a hand on the shot despite a despairing dive.

The early pressure continued unabated and a second Carthusian goal was only avoided a few minutes later courtesy of a superb intervention from Jamie Jordache – Harrow’s outstanding performer in the first half – who tracked his man across the box and flung himself in front of a shot following another strong run to the byline from Cameron.

Jordache was then involved in Harrow’s first meaningful attack of the game, winning the ball on the right before feeding Ollie Curry on the wing. He turned the ball inside to Hutchinson who had a golden opportunity to play James Breeden through on goal, but the pass was fractionally underhit, allowing the last Carthusian defender to intercept.

Referee Stephen Tate then took centre stage, booking Alex Gilbert for a late tackle in the middle of the pitch, before angering the Carthusians when he awarded them a free-kick for a foul on the edge of the box despite their right winger running clean through on goal. Fortunately, despite yet another quality strike from left-footer Cameron, McGuinness was up to the task, tipping the ball onto the bar before it was hacked to safety.

At this stage, twenty minutes in, the gulf in class between the teams was clear and it seemed only a matter of time before the visitors doubled their lead. But as the half wore on, the hosts grew in confidence and began putting the Charterhouse back four under much greater pressure. Hutchinson again made a nuisance of himself, challenging anything that moved in a striped shirt, the two wide men, Gilbert and Curry, began seeing more of the ball, and James Breeden caused panic whenever he gained possession.

As Harrow’s play improved, so the chances began to arrive. Curry’s instant control of a fizzed crossfield pass allowed him to glide past the left-back but his drilled low cross evaded everyone and rolled wide of the far post. Charlie Bick then delivered a superb free-kick to the far post which found Alex Breeden unmarked, but his header again missed both the goal and the lunging Alex Gilbert.

Finally, just four minutes prior to the break, Harrow’s persistence paid off and they equalised courtesy of an excellent goal. Bick began the move in the middle of the pitch, feeding Ollie Curry on the right. He fed the ball inside to Hutchinson, who produced a gorgeous first-time flick for James Breeden to run onto and bury his shot into the far corner.

Despite the visitors finding the net again a couple of minutes later, referee Tate blew for offside and the sides went in to the break level – a fair scoreline on the balance of play thus far. Substitutes George Gould and Tristan David were held back a little longer, with the home side determined to press their opponents more and prevent them enjoying the kind of time and space they were afforded in the opening spell of the half.

And, just as in the hugely entertaining game against the Rugbeians a week ago, the second half began with a flurry of activity. The Blues picked up where they left off, quickly applying pressure on the Charterhouse goal. Alex Breeden was left cursing his luck as a snapshot from the edge of the box drifted just wide of the far post following a long throw. Moments later it was Alex Gilbert feeling aggrieved, as he tumbled inside the box under a diving challenge from a defender. But referee Tate remained unmoved, despite heavy Harrow protests.

And then, from pretty much their first sortie into the Harrow half since the break, the visitors snatched the lead for the second time. A long throw from the left was inadvertently flicked on at the near post by the stretching Jordache and headed home comfortably at the far post by an unmarked Carthusian.

Despite this setback, the hosts continued to press, belief still apparent that a positive result could be achieved. And this optimism was rewarded with a second penalty claim a few minutes later that the referee this time agreed with, James Breeden bundled over as he drove down the right hand side of the box. The striker dusted himself down and put memories of his previous miss against the Carthusians out of his mind, sending the keeper the wrong way to level the scores once more.

At this stage, the game appeared there for the taking for either team. But again, the porous Harrow defence was breached all too easily, Harrow remaining level for barely three minutes. Cameron was again the scorer, a lovely cross from the left powerfully volleyed in at the far post, with McGuinness caught debating whether or not to come for the ball.

Again the hosts responded. Charlie Bick raced onto a through ball and attempted to lift the ball over the onrushing keeper. The Carhusian gloveman managed to block the effort but was left in a heap on the ground, the ball falling invitingly to Pablo Hutchinson on the edge of the box. Unfortunately he just got under his first-time effort and lifted the shot agonisingly over the bar.

Substitutes George Gould and Tristan David were introduced, the latter making his first team debut. But Harrovian plans were thrown into disarray soon afterwards when Alex Gilbert was shown a second yellow card for a late tackle right in front of the referee. There was little argument to be had, the offence was clear enough, and Harrow’s task, already tricky, now became Herculean.

Unsurprisingly, the visitors never looked like relinquishing their lead after that. The final twenty minutes saw the hosts continue to battle hard, but struggle to create any chances of note. Two further Carthusian goals, five minutes apart, settled the game. Another long throw caused problems for the Harrow defence, with McGuinness this time saving the flick on, only for the rebound to be finished from close range. And with ten minutes remaining Cameron completed his hat-trick in style, running clean through the middle to drill the ball through the legs of the Harrow skipper.

Alex Breeden had one final chance to reduce the arrears, heading over from point-blank range following another excellent free-kick delivery from Charlie Bick. But in truth the Blues were well beaten by this stage and a third goal would have meant little.

It was a valiant effort from the home side, especially considering the rather makeshift nature of the lineup and the fact that the result was only put beyond doubt once the team had been reduced to te men. For all the plaudits, however, the continuing concession of goals continues to hurt the team, with the total for the season now standing at a grossly unhealthy 48 from just 15 League games. It is no disgrace conceding five to the Carthusians, especially when two of the five were scored against ten men, but the nature of some of the goals must disappoint the side. However promising the attacking play, however strong the desire to compete, results are going to continue to suffer if the side cannot find a way of restricting opponents’ opportunities.

Three games remain and despite other results going their way on Saturday, the Blues are still far from safe in their quest to stay in the top flight. Next week the side travel to face second-placed KCS Wimbledon on the astroturf in Southfields, before ending the season with home and away fixtures against Eton. There is much work still to do.