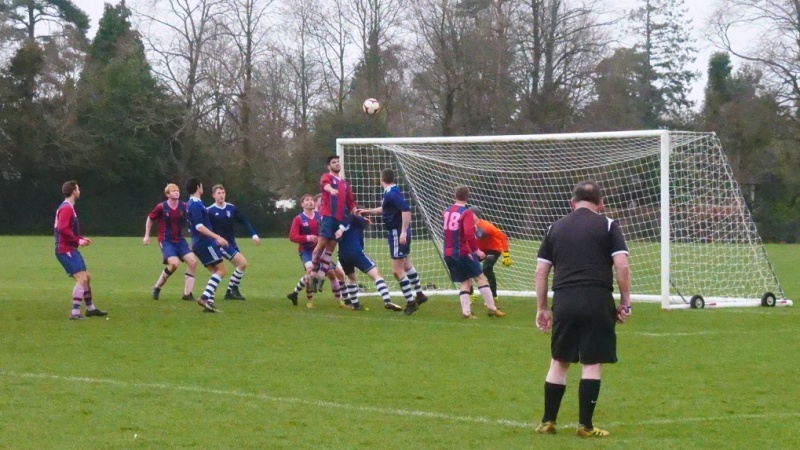 The OHAFC 2nd XI became only the second side to avoid defeat against their Carthusian counterparts this season when a dramatic late equaliser from left-back Will Monroe secured a 4-4 draw in a thrilling game on Saturday morning. With a tricky breeze blowing towards one end, both goalkeepers struggled with set-pieces, the OHAFC racing into a 3-1 lead at the break, only to then concede three further goals themselves. But with the minutes ticking down, a hopeful long ball into the Carthusian penalty area caused further problems and Andy Hutchinson crossed for Monroe to gleefully fire in his first goal of the season. The point keeps the Blues on track to secure a coveted second position in Division Two, although with the Old Rugbeians maintaining their excellent run of form with yet another win, the OHAFC still have plenty of work to do in their three remaining games.

The point was just reward for yet another excellent effort from the men in blue. Disappointed to be told on arrival they would be playing on Broom and Lees, the pitches over the bridge that are of distinctly inferior quality to those closest to the school, the visitors knew that a none-stop, physically demanding scrap would ensue for the full ninety minutes. And that is exactly how the game panned out, with the hosts’ tireless running at times stretching the OHAFC to the limit. But the Blues have shown they can compete with any side they have faced this season and they fought to the end, taking advantage of the hosts’ clear discomfort at set-pieces.

Indeed, the visitors could have led inside the first two minutes when a sweeping move forwards forced a corner and Tom Ward headed over from point-blank range when a goal appeared inevitable. The hosts gradually stepped up through the gears, switching play regularly and sending their full-backs forwards to create overlaps down both flanks. Geoff Taunton-Collins and Will Monroe both had their work cut out, but they weren’t the only ones. The constant movement of the Charterhouse midfield saw the Blues totally overrun at times, with the only respite coming when long balls forward allowed wide men Andres Hutchinson and Tristan David to carry the ball deep into Charterhouse territory. And on the early evidence, it was apparent that the hosts were not nearly as confident at the back as they were going forwards.

This defensive frailty manifested itself spectacularly midway through the half when the visitors struck three times from dead ball situations in a dramatic fifteen-minute spell. The unexpected rush of goals began with a corner from the right whipped over to the far post by Hutchinson. Everyone was caught under the ball, including the Carthusian keeper, except for James Tippett, who read the flight of the ball perfectly to meet it as it landed and slot home from inside the six-yard box.

The lead was doubled shortly afterwards in similar circumstances when another corner from the right was partially cleared to the penalty spot. The retreating Ed Beecham hooked the ball back over his shoulder towards goal and the ball would have crossed the line anyway, even though Tristan David applied the merest of touches a yard out.

The Carthusians were shell-shocked, enjoying by far the better of the play but finding themselves 2-0 down on the scoreboard. And their mood darkened further on the half-hour when a free-kick on the left was curled into the box by James Tippett. Initially, it appeared a simple enough save for the keeper, with the ball heading towards the centre of goal. But a lack of footwork saw the Carthusian stopper again caught under the flight of the ball and it sailed in, just under the crossbar, unimpeded. By this stage, the visitors were in dreamland - surely one of the few occasions an OHAFC side has ever led 3-0 away to a Charterhouse team in the Arthurian League.

The hosts did pull a goal back prior to the break courtesy of a well-worked move, but the Blues battled gamely to ensure no further damage was done and a two-goal lead at the half ensured a positive, energetic team-talk from the skipper.

Somewhat predictably, the second half proved almost a mirror image of the first. Now playing into a slight breeze, the Blues actually began the half well and appeared capable of matching their opponents stride for stride - the removal of the pacey Carthusian left winger an unexpected boost. But, just as the visitors had proved prior to the break, the threat of set-pieces with the breeze behind them was a significant one, and the hosts took full advantage, matching Harrow’s tally of three goals without reply in quick succession.

Two came from dead-ball situations, the first a simple flick on from a free-kick, the last a corner from that right-hand side that was curled over a crowd of players and straight in at the far post. In between, however, came a superlative effort from one of the Carthusian midfielders, who showed it was still possible to score without the use of a set-piece when he chested a Harrow clearance down over thirty yards out and, without letting the ball bounce, volleyed it straight back over Charlie Walsh’s head and into the net.

Clearly, momentum was now with the men in the magenta stripes, but both sides came within inches of adding to their tallies with the woodwork being hit no less than four times. Tippett and Hutchinson were the unlucky men for Harrow, the Carthusians striking the bar twice from set-piece efforts. The visitors then had a golden opportunity to level when a well-worked move down the left saw the ball crossed to Tippett in space inside the box. Disappointingly, he chose to try and turn when there were three blue-shirted players waiting to be teed up.

But that was soon forgotten courtesy of the dramatic late equaliser from the unlikeliest of sources. A free-kick inside the centre circle posed no immediate threat, Lederman lumping it forwards more in hope than expectation. But yet again the defensive frailties of the hosts’ keeper were exposed, his fumble allowing Dan Firoozan to collect and feed Andy Hutchinson on the right. The winger beat two men to the byline, cut the ball back to the penalty spot and Will Monroe arrived on cue to gleefully drive the ball in for his first ever OHAFC League goal. Understandably, the late securing of a draw almost felt like a win for the men in blue.

There was further good news with several players struggling with injury managing to complete ninety minutes without issue. Notably, centre-half Tom Ward, who played his first full match since November, and Andy Hutchinson, whose swollen ankle from last weekend’s Aldenham fixture looked set to keep him out of action for a while.

The side now have a week off before their final run of three fixtures, two against the Old Sennockians and one against Forest 2s. Three wins are likely to be required if the Blues are to achieve their goal of finishing runners-up to the Carthusians come the season’s end.