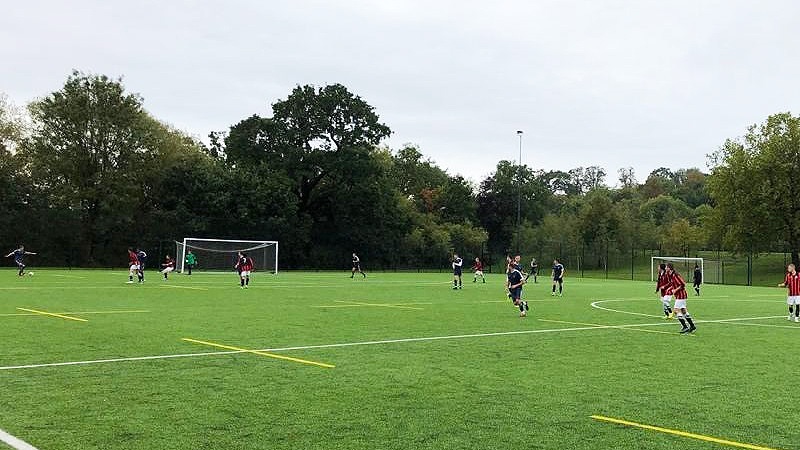 The OHAFC 1st XI once more found themselves on the wrong end of a rather unhealthy scoreline on Saturday as they succumbed 6-1 to a strong Old Bradfieldians side on the Harrow School astroturf. Despite pulling a goal back to trail only 2-1 with a little over half an hour left, the visitors dominated the closing stages, so much so that the final five-goal margin of victory was in no way flattering to them. With only a point to show from their opening four games and 24 goals conceded, there is plenty of work to do for the OHAFC 1s going forwards.

The recent poor run of results is all the more puzzling given the fact consistently strong squads have been named, albeit now shorn of both Breeden brothers due to long-term knee injuries. And so it was the case again on Saturday, with a starting eleven so strong that Doug Morrison and Chris Abdo both found themselves on the bench. Skipper Fraser McGuinness, in a bid to try and engender a change in fortunes, switched to a 4-4-2 formation, sacrificing the extra man in midfield to partner James Tippett and Harry Bick up front together. Beecham and Firoozan were partnered together in midfield, with Jamie Jordache and Cyprian Owen Edmunds the wide men.

Despite the visitors arriving later than scheduled and able to warm up for no longer than ten minutes, they made the faster start, looking quicker and sharper to the ball than a rather flat OHAFC side. An early attack down the Bradfield right saw the ball delivered into the box dangerously. McGuinness punched clear to the edge of the box, but it was turned out wide again and this time a superb cross into the box left a simple header for the unmarked centre forward.

The visitors continued to dominate the first half, keeping possession with some ease against an untidy Harrow press. Too often the Bradfield midfielders were allowed time and space on the ball to switch play at their leisure. Whenever Harrow did win the ball back, possession was almost immediately lost again. The hosts only survived further concessions due to a couple of saves from their skipper and some wayward finishing from the visitors. But yet another loss of possession in a dangerous area did eventually cost the Blues, the ball being won in midfield and a couple of forward passes later saw a shot fired past McGuinness from the edge of the box.

At 2-0 down something had to change, so Doug Morrison was introduced off the bench in place of Owen Edmunds and the side reverted to their standard 4-5-1 formation in a bid to change the momentum in midfield. The Blues did look slightly more secure now, but the visitors still appeared the more cohesive unit and comfortably maintained their two-goal advantage to the break.

For once, the OHAFC skipper could not contain his displeasure at the effort he had seen from his troops and made it clear in no uncertain terms that a repeat performance in the second half would not be tolerated.

Initially it appeared as though his words had had some effect, with the Blues keeping possession better after the break. Shortly before the hour-mark they found themselves back in business courtesy of a long-range strike from Dan Firoozan, whose effort from outside the box somehow squirmed through the grasp of the Bradfield keeper and into the back of the net.

But any hopes of a comeback were swiftly dashed. Bradfield hit back quickly with a shot of their own from just inside the box to restore their two-goal advantage and as the half wore on, proceeded to dominate the game, creating numerous chances as the Harrow midfield almost became non-existent. Time and time again the back four were exposed to Bradfield runners pouring forwards, the game degenerating into almost an attack v defence training exercise.

Despite the best efforts of McGuinness in goal and his over-worked back four, the Bradfieldians still created sufficient opportunities to score three further goals and miss several other golden chances. It could, and probably should, have finished with an even greater margin of victory.

Plenty of food for thought for the skipper and his players then ahead of another tough task this weekend and the visit of the Alleynians to the Hill. The squad is strong enough, availability has been decent, the team need to work on their defensive shape and must keep the ball better if they are to compete with the best sides in the division.