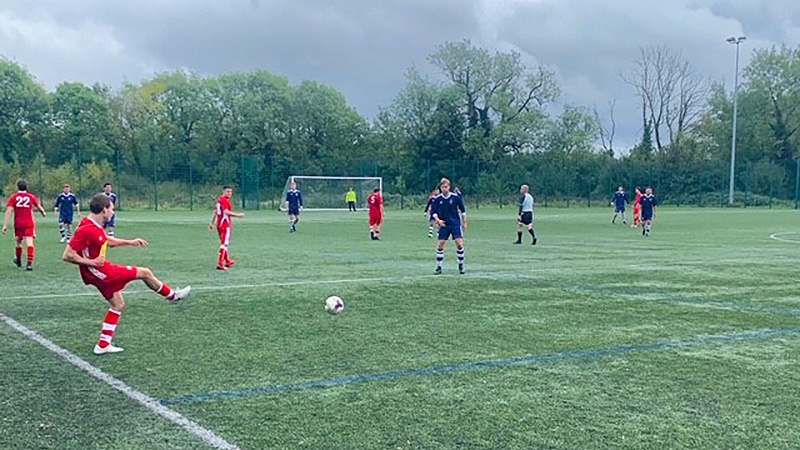 For the third time in four games, the OHAFC 2nd XI came away from a long away trip with just a solitary point to show for their considerable efforts, although whereas last weekend’s dramatic late 2-2 draw with the Old Etonians felt like a victory, this Saturday’s 2-2 draw at Sennockians felt like more of a defeat.

In a game that proved almost a mirror image of the Eton clash, the Blues started superbly on this occasion, earning a 2-0 lead courtesy of efforts from Charlie Stebbings and Jack Robinson – the latter scoring his first ever League goal for the club with a wonderful long-range strike. But Sennockians levelled prior to the break and earnt a point when a defender was left unmarked at a corner to head powerfully home midway through the second half. The point leaves the Blues without a win so far this season and stuck in seventh in Division Two of the Arthurian League.

It was a result that was tough to take for skipper Geoff Taunton-Collins – who travelled down to Kent despite being on crutches and having received confirmation that his knee injury was indeed serious enough to warrant surgery – and the squad of twelve, including debutant Ed David, brother of winger Tristan, and both Rollo Hovey and Jack Robinson, making their first appearances of the season. Tom Ward was the sole substitute, the skipper wary of reintroducing the centre-half back into action too soon given his persistent hamstring problems.

Having looked lethargic and uncertain in a dreadful opening twenty minutes at Eton a week ago, the visitors decided they would adopt a different approach and press the hosts high inside their own half from the first whistle. The plan worked to perfection, with the Blues dominating the opening exchanges, looking quicker to the ball and hungrier in the tackle. Tristan David was freed numerous times down the left wing, with Jack Robinson showing few signs of rustiness behind him at left-back despite his appearances for the club in recent seasons being few and far between. On the other side of the pitch, new boy Ed David slotted in at right-back and immediately looked a natural, quick, aggressive and, most surprisingly of all for an Old Harrovian, very vocal, giving plenty of helpful shouts to his teammates.

With Harrow in the ascendency, the opening goal wasn’t long in coming, a composed move through the middle of the pitch that saw Dolbey feed Lederman on the right and his left-footed through ball down the inside right channel invited Charlie Stebbings to run on and calmly clip the ball into the far corner with a precise right-foot finish.

If that goal was the culmination of a joint effort, the second, after twenty minutes, was solely down to one man. Further Harrow pressure down the left saw the ball delivered into the box and half-cleared, apparently to safety. Robinson had other ideas however, striding forwards and taking a touch to control before unleashing an unstoppable shot that appeared destined for the back of the net the moment if left his boot. The connection was so perfect, it left the Sennockians keeper floundering, despite the ball sailing in straight over his head.

The Blues were in charge and set about finishing their opponents off, again utilising the space down the left to free David and Hutchinson. The final ball continued to prove elusive however, as it has done too often this season, and the Sennockians goal remained largely untested.

But just as the Etonians faded after their fast start a week ago, so the OHAFC did likewise here. Their fast tempo of the opening half-hour proved unsustainable and as their pace dropped, so the home side began to threaten. The Sennockians did, in fact, possess a couple of fine ball players and threaded together some neat moves in the middle of the pitch before working the ball out wide. Again, the Blues were caught unsure about whether to continue to press or not, with the result that it became too easy for the Sennockians to play through the midfield. And the hosts duly got the goal their pressure deserved shortly before the break, although there was a touch of good fortune about it. A quick break down their right saw the pacy forward drive into the box. The Blues had men back but the first tackle saw the ball ricochet perfectly back into the striker’s path and despite the angle being a narrow one, he produced a powerful strike that defeated Walsh at his near post.

With centre-half Harry Woolley feeling his hamstring as the half had worn on, a half-time substitution was required, so a delighted Tom Ward entered the fray in a straight swap at the back. The side agreed a low block would be the better option for the remainder of the game, in order to prevent the Sennockians from playing through them with such ease.

And from a defensive viewpoint, this change worked perfectly, denying the hosts any space in which to play and nullifying their threat to such an extent that goalkeeper Walsh became almost a spectator in the second half, a couple of overhit through-balls notwithstanding.

But creating clearcut chances at the other end proved almost equally as tricky for the visitors, despite Tristan David continuing to threaten down the left and some surging runs down the right from both his brother Ed and Rollo Hovey. Any crosses into the box were well defended by the Sennockians, any long-range strikes were notable for their inaccuracy.

All of which meant that for any neutrals watching, the second half fell distinctly short of memorable action. That was until with around twenty-five minutes remaining a Sennockians corner, earned through some slight hesitation in the Harrow back four, saw the unmarked centre-half head powerfully home from eight yards out, Hovey unable to react in time on the goalline.

The closing stages became slightly heated, but referee David Buck was on fine form and handled the game superbly. Even a contentious late back-pass incident, in which it appeared as though the Sennockians keeper had controlled the ball with his hands, was calmly explained away by the official, although there was some lingering doubt from the visitors as to whether or not they had received the thin end of the wedge.

There was little to reproach the visitors for at the final whistle, other than the lack of marking at the corner that ultimately cost them the win. The side continue to try to find the correct balance in their pressing efforts but, pleasingly, tactical switches at half-time in the last couple of games have proved astute. Quality in the final third is still some way short of the levels shown for the majority of last season, but that is perhaps understandable given the rotation of available centre forwards and solitary appearance of last season’s leading scorer, and star player, Andres Hutchinson.