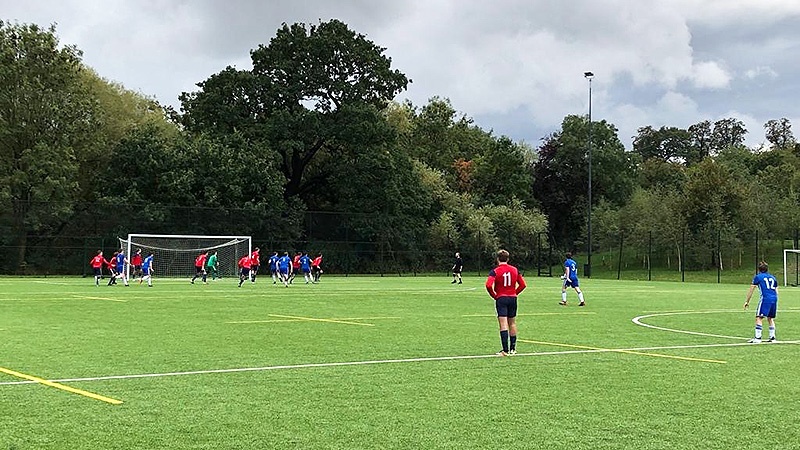 Despite taking a commanding 3-0 first-half lead and playing against ten men for over half an hour, the OHAFC 3rd XI were forced to settle for only a point in a disappointing 3-3 draw at home to the Old King’s Scholars on Saturday afternoon.

Having suffered heavy defeats to the two unbeaten sides at the top of Division Four, Old Cholmeleians 2s and Old Alleynians 3s, the Blues were keen to kick-start their season with an improved display at home to a Scholars side who had also suffered at the hands of the Old Alleynians on a previous weekend. A strong squad of fourteen was named, hugely encouraging from both the team’s point of view and for the club, with all three Saturday sides in action. Ade Omisore made a welcome return to action, although he was only fit enough to start on the bench. Arthur Blount made his first appearance of the season, as did striker Freddie Everett, whilst Mikey Watford ensured it would be a birthday to remember for him…one way or another.

Under leaden skies on the artificial turf at Harrow – the Phil pitches now available for football but, of course, also now waterlogged due to the week’s downpour - the hosts, wearing their change strip of red shirts due to a colour clash, made a superb start and found themselves 2-0 up inside half an hour. Skipper Ed Nicholson fired a perfect through-ball down the right for wide man Brooks to run onto and he finished with aplomb to earn a fifteen-minute lead. Ten minutes later it was doubled from the spot, Ali Buckley converting his third spot-kick in two weeks following a foul on Arthur Blount.

At this stage the home side were rampant, Everett missing a couple of chances to extend the lead. But it didn’t appear to matter. Ade Omisore came off the bench and looked sharp on his return to action. He was certainly alive enough inside the box shortly before the break when he bundled home a loose ball following a bit of a scramble to make it 3-0.

At half-time all the talk was of not getting complacent against a King’s Scholars side that appeared there for the taking. Several changes were made, skipper Ed Nicholson ensuring all fourteen players received adequate playing time.

Whether these substitutions unsettled the rhythm of the side or whether it was simply half-time coming at just the wrong time for the Blues, the second half proved a very different affair to the first. It didn’t help that King’s pulled a goal back soon after the break, another set-piece causing problems inside the Harrow box and allowing a close-range finish.

Shortly afterwards, a foul in the middle of the pitch saw the ball played forwards quickly by the visitors and a lack of communication in the Harrow back four again allowed a simple chance for Kings which was duly converted. At 3-2 with half an hour to go, the game was now in the balance, although the hosts were aided in their cause when the visitors were forced to play for a while with ten men, an injury leaving them short of numbers. Chances to put the game to bed duly arrived but were again spurned by the Blues, substitute Tarquin Strickland working his socks off up front without being able to apply the decisive finish. And they were made to pay for their profligacy in front of goal when another set-piece for Kings with a quarter of an hour to go saw further poor defending by the OHAFC and the ball turned gleefully in. Remarkably, the OHAFC now found themselves in a fight simply to secure a point.

The closing stages saw some frantic end-to-end football as both sides pushed for a winner, the Harrow back four of Colehan, Nicholson, Tritton and Blount stretched to the limit to preserve equality. Needless to say, at the full-time whistle, the point gained most definitely felt like two points lost, although there were some excellent performances from the men in red, Olly Roberts and Arthur Blount in particular.

Division Four looks like splitting into two distinct groups of four this season, with the current quartet in the top half having won nine of their ten games played, the bottom quartet yet to register a single win. The OHAFC, despite having just a single point to their name, sit in fifth and must aim to drop no lower as the season progresses.