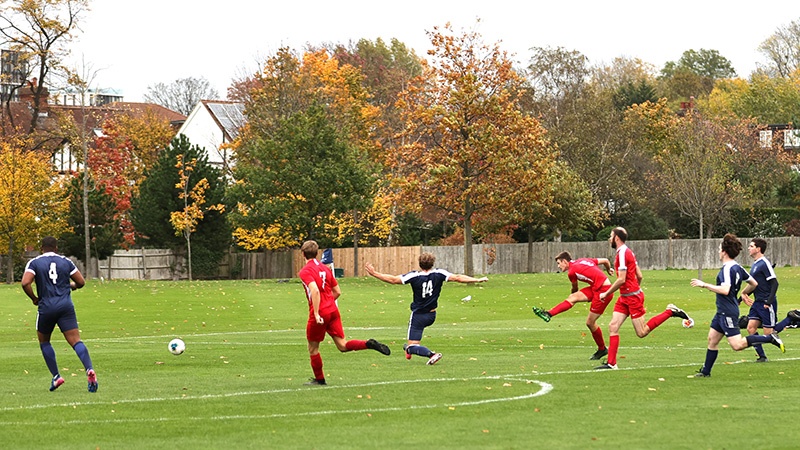 A solitary strike twenty minutes from time was sufficient to earn the KCS Wimbledon Old Boys a vital 1-0 win over a struggling OHAFC 1st XI on the Hill on Saturday afternoon. In a tense, tight affair between two sides in the wrong half of the table, chances were few and far between in a game played in strong winds throughout. But with a goalless ninety minutes looking increasingly likely, a powerful shot from the corner of the penalty area from a KCS midfielder earned the visitors the win and the three points, lifting them clear of the OHAFC who remain at the foot of the table.

Despite the disappointing result, the Blues at least looked far more solid defensively than in previous fixtures this season. Whilst credit must go to the back four of Kyle and Connor Barrett, Jonny Lalude and Cyprian Owen Edmunds, the return to action of former 1s regulars Ed Poulter and Jack Hill at the base of the midfield made a huge difference, the pair shielding their defence to great effect throughout.

Indeed, the first half was notable for the lack of any real goalscoring chances of note, both sides struggling to create in the strong breeze blowing towards the Alcock Pavilion. With half an hour gone, the hosts began to build up a decent head of steam, forcing numerous corners, but the closest the side came to opening the scoring was via a cross from Jonny Lalude that was headed goalwards by striker James Tippett. Although the ball was dipping under the crossbar, the effort was too straight and was well tipped over by the Wimbledon keeper.

At the other end, the visitors managed to create a couple of half-chances but skipper McGuinness was relatively untroubled until a fine effort from the corner of the box that whizzed past him only to strike the inside of the far post and bounce safely to a Harrow defender.

Having safely negotiated the first half, the hosts knew that a sterner test awaited playing into the wind. And sure enough it didn’t take Wimbledon long to begin pumping balls long towards the Harrow box, utilising the height of their forward players. A couple of half-chances were fashioned, McGuinnes having to be alert to tip a speculative toe-poke over the bar, and a number of corners were well defended as pressure built on the Harrow goal.

Several substitutions were made, including an OHAFC debut for last year’s School 1st XI captain (and Head of School) Andrew Holmes, who produced an impressive twenty-minute cameo in midfield, immediately looking at ease. The back four continued to throw themselves in front of every shot and cross the visitors could muster with heroic zeal, but there was little that could be done to prevent what turned out to be the only goal of the game when KCS broke forwards down their right, the ball arriving at the feet of a midfielder on the corner of the penalty area and he produced an unstoppable low drive into the far corner of the net from just inside the box.

Try as they might, the Blues could not force an equaliser, the lack of a cutting edge that has seen the team score just five goals in their seven games to date once more apparent. Wimbledon held on comfortably and celebrated enthusiastically at the final whistle, the importance of the result not lost on anyone.

Nevertheless, the performance gives the side a solid foundation on which to build going forwards, beginning with an intriguing Dunn Cup first round tie away to the Old Malvernians next weekend. Malvern sit third in Division One and have conceded seventeen goals from their six League games to date – could this be the opportunity the OHAFC 1s need to rediscover their attacking prowess?